You have to appreciate Scream 4 (err, Scre4m for those paying attention) for what it does, or better yet, how it does it. The snappy opening sequence spoofs itself and horror sequels with affection for the genre, all while stabbing it in the gut. Rules are established, much blood is spilled, and that hot intro condemns it all. Irony is so sweet.

Eleven years post-Scream 3 (just think, it would have been Scr3am nowadays), the characters return, a small sign of dedication but also respect. Who knows, maybe a little nostalgia snuck in there too, this now revitalized franchise all of the old with a fresh batch of teens to dispose of at the hands of the unknown Ghost Face.

Characters have followed their natural arc, Gale Weathers-Riley (Courtney Cox) still on her rampage, although it’s reflected on even bitchier newcomers, including Sidney’s (Neve Campbell) PR woman. Yes, Sidney has used her fame deftly, whipping up an inspirational novel on her survival though a trio of horror sequels and somehow coming to terms with it.

Through it all, there’s a mystery to solve, Dewey (David Arquette) inexplicably healed from a prior injury and on the case. There’s no loss of wit or energy, Scream 4 steamrolling itself to a finish just under two hours. It loves those freakish false scares, wildly off-beat bits of misdirection, and self-referential jibs. Nothing has changed here other than the genre itself.

Really, Scream 4 is better than it has any right to be. Needless? Sure, more so after a pitch-perfect finale back in Scream 3, but that’s sort of the point. This should be forced, the gore should be excessive, and the audience should be lapping it up. That’s the joke. How many Saw movies have audiences been responsible for now? Why not invite Scream back into the fold? If it still has the energy, it can stick around too. 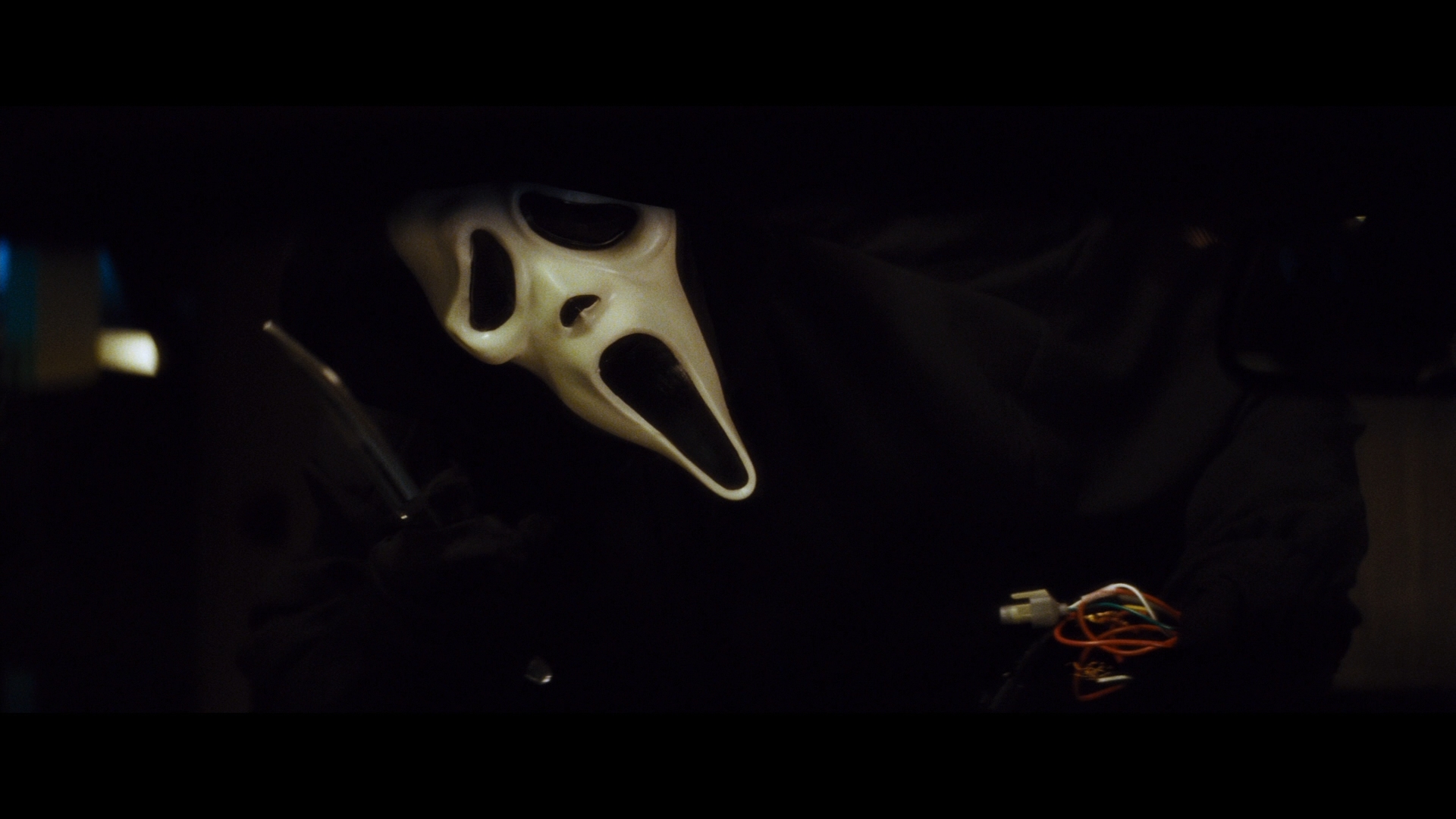 Anchor Bay delivers this AVC encode for this fourth installment, which from the start offers plenty of pizzazz. Facial detail glistens, black levels are brutal, and the contrast is given this slightly hazy, pleasing hotness. Grain is kept clean and at bay in terms of its digitization, and in terms of this franchise’s treatment so far in HD, Scream 4 is a killer (zing!… okay it was stupid).

That beginning expectation doesn’t hold up though, the transfer becoming a bit haphazard as time rolls on, black levels lightening up to alleviate some rather glaring crush, but losing their opportunity to produce those same intense visuals. The parking garage attack, near the 45-minute mark, is the first sign something is amiss, blacks drained into a muddy, murky gray scale. A handful of nighttime car interiors with Dewey blow it to the point of distraction.

Pristine detail must have had its contract revoked midway through too, close-ups becoming less and less definitive in their texture. Part of it is that heavy contrast, always blooming and times more obnoxiously than your average lens flare. That saps some of the fidelity energy, and the rest is just lost. The mid-range is middling at best, and some focal tricks will lessen the impact too. Colors will bring back some of the spark, warm and heavily saturated as far as flesh tones are concerned.

Unlike the first three films though, the look isn’t the result of blatant tinkering. Scream 4’s source seems left alone, the codec efficient, and Craven’s photography kept pure. It’s not premium hi-def material, but true to the source. What it lacks in general appeal it makes up for with its energetic appearance, seemingly shot with the internet film geek in mind. Maybe that’s part of the gag too.

There’s a mildly disappointing lack of spooky scares going on within this DTS-HD track, Scream’s killer more interested in precise sneak attacks than exposing his jump scare location early. That said, the soundfield does get a workout, some dogs barking scaring Sidney a little past the hour mark, and a little bit of tree rustling getting the jump on someone later. Those are well positioned, the dog barks actually traveling as more neighborhood pets get in on the bark-o-thon (?).

Marco Beltrami’s contribution to the series continues with a snazzy score, complete with a bountiful wrap-around effect to seal its presence. It can catch the low-end a little too, providing a jolt where necessary.

The key here though it action, people tossed through windows or through glass tables (there’s a lot of glass in this one). Shattering pings the rears effectively to keep a very distinct soundfield alive. Some positional voice work/screams are appreciated to enhance the effect, ensuring the kills are spread about the soundfield. It’s important that the kills can be heard in such clarity… for, uh, you know… kills are crucial in 5.1?

A commentary pulls in Wes Craven, Hayden Panettiere, Emma Roberts, and a short stint with Neve Campbell. Deleted scenes carry over the commentary, 19 total deletions running around 28-minutes total. The gag reel has a number of great on-set scares from unsuspecting actors in mid-performance, while a 10-minute making-of is entirely typical.