Seven and a half hours is the time Mchael Bay’s Transformer film series has sucked from the life of summer movie goers. Part of it gross negligence in the editing room, another being the maniacal ego of someone whose sole purpose in life is to become a spokesperson for special effects, and yet one more is to ensure maximized screen time for corporate partners. It’s not an accident the Lenovo logo is splattered dead center on the screen during office visits, or that the title characters themselves are based on actual brands.

Bay keeps shoveling these things out because people keep going to see them, or maybe they really enjoy non-subtle advertising; who knows? But, it’s been seven and a half hours and we still know zip about these robots. Maybe that spark of information would ignite some long dormant intelligence this series has yet to deliver, Bay fearing his audience might be too bored to learn why robots age, why Megatron needs to wear a hood, or why some robots disappear in each sequel. Insert fresh new robots en masses to ensure action figure sales climb beyond Optimus Prime, Bumblebee, and Megatron. Never mind the old toys are now woefully outdated because those robo buddies are no longer part of the franchise.

We’re here to dissect Dark of the Moon though, not the idiocy of the series as a whole. Writer Ehren Kruger crafts something with a tinge of smarts, at least compared to the boneheaded Revenge of the Fallen. An episode of the Teletubbies offers more thought-provoking material than the second film.

Still, the overwhelming urge to punch someone responsible for this narrative remains, characters in this series apparently raised on these films alone. Politicians think it’s a fantastic plan to ship the Autobots off Earth right as the Decepticons plan their assault. Take the second “c” out of Decepticons and what’s left? Exactly.

Dark of the Moon – named illogically as to avoid spending a few bucks on licensing rights – flounders around, inserting overbearing comic relief where it’s not needed, a brawl or two just to liven things up, and sex appeal because the public demands it. Rosie Huntington-Whiteley wasn’t cast for her ability to run around a devastated Chicago in heels, although she’s awfully good at it.

There’s a lot of beautiful people in Dark of the Moon; it sells better. So beautiful in fact they can’t be damaged, Tyrese Gibson falling through multiple windows, diving in shattering glass as a building collapses, and comes away without so much as a scratch. The robots bleed more… seriously. For whatever reason, the Decepticons and Autobots shed gallons of red liquid as they’re heads tear from their metallic shells, never mind the glaring continuity error that creates between films.

The nonsensical story concerns the Apollo missions, terrible CGI JFK’s, and the plot to bring Cybertron to Earth to use humans as slaves for rebuilding. Never mind the catastrophic gravitational effects such a plan would cause, or that the Decepticons go on a human slaughtering spree in downtown Chicago as the plan is hatched. Aren’t the humans supposed to be slaves or did we forget that five minutes after explaining it? Whatever the case, the obvious non-fakeout regarding the death of some four Autobots goes nowhere other than for false tension, stuff blows up for about an hour, and the credits roll. How blasé and familiar this creature has become. 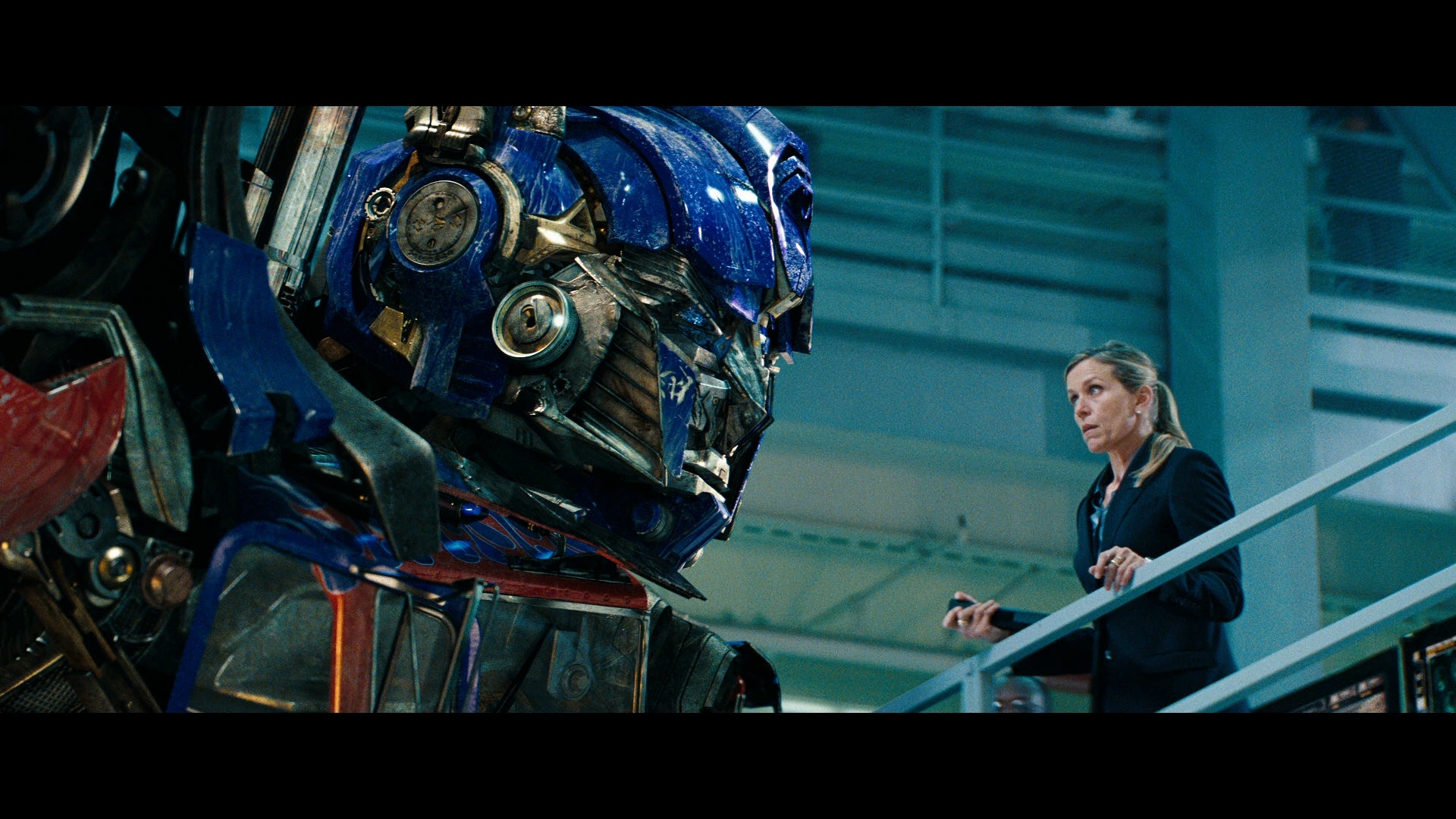 Michael Bay’s tragically teal and orange induced film is a modern marvel of sight-seeing, were it not for the color atrocity of course. Shia LeBeouf and crew keep their absurd tan from the previous films, so overcooked they should be more worried about the cancer the digital intermediate caused them. The mess of inaccurate teal building colors, Bumblebee’s total lack of yellow (it’s now orange), and completely inept interiors completes a cycle of modern Hollywood idiocy with regards to technological advancements. This could be sugary fun, but instead the potential is squandered because everything Bay touches has to look exactly the same.

Captured on film and digital (the latter part via the Red One and Sony CineAlta series), that switch might explain some mild lapses in mid-range definition, always a clear sign of the Red. It also delivers those staggeringly rendered cityscapes, jaw-dropping aerial views, and marvelous CG spectacle to compensate. Paramount’s generous 30mbps or so AVC encode retains it all, even the millions of bits of dust particles or the ripped, shredded metal in motion. Artifacting? Not here.

Close-ups remain prime hi-def material, early on the firmly visible pores striking, and later the increasing amount of dust and dirt. The mega-contrast doesn’t cause too much harm, although it will take a little of the detail’s life. There’s still plenty of fight left in this one though, from clothing stitches to refined hair. Nothing gets by this encode. The Transformers are even better, the level of detail increasing as the fights go on and more parts are exposed. Paint chips and scrapes (who paints these between movies? Ah, never mind) become glaringly apparent exactly as they should, and all of those moving parts are only appreciated in the proper resolution.

That’s not to say there’s no aliasing, some car grills breaking up along with some of the buildings off in the distance. In the scheme of things, especially something this chaotic, spotting such a minuscule fault is nigh impossible. Still, this is a movie series hell bent on impressing people and even selling an entire format. Those faults do add up.

Black levels will prove striking in their intensity, no surprise there. It’s been a constant since this franchise’s first debut in hi-def on HD DVD. Shadow detail may be lacking, the off-set being a truly deep, powerful sense of dimensionality to these images, even if it’s cheating a bit to get there. A mild grain structure will pop up here and there to remind viewers of the film-based stuff, insignificant in its appearance. The encode pushes this one out with seemingly little trouble, although there’s a compressionist out there cursing the complexity of the material. Hats off to you, whoever you are.

Dark of the Moon’s opening salvo doesn’t take long, an action scene involving some snake/robot/Decepticon thing barreling through the home at 18:06. Dark of the Moon won’t let up during it’s menagerie of action blasts, the next round coming during an office shoot-out about a half hour later. Bullets and TPS reports scatter around the soundfield, the rarely seen TrueHD 7.1 codec never missing a chance to show off.

From dialogue to gunfire, all elements will make a brief expedition into the surrounds, or even into the stereos. Even Paramount’s grand mountain/star logo whips up the soundfield with some early energy. This is all-out war, Megatron and his cronies battling amid easily recognized Washington locales as the Autobots make their saves. They roll and transform, scattering the sound mix seemingly with little effort in mixing. It all comes natural to these movies.

Bass isn’t lost either. From a rocket ship launch to a number of melee maneuvers that will crunch metal and live up to the tradition of this home theater legacy. The sub will deliver punishingly deep one-off shots or slowly developing rumbles that reach unheard of crescendos. This is one of those pure, “I hate my neighbor” discs, the type that can tear apart communities, and isn’t that what home theater is made for?

From about the 1:45:00 mark on, the extended finale becomes one of the longest demo sequences ever, a brutal assault on all aspects of your equipment and likely your health. Ears will be pierced by ridiculously loud gunfire pings, and your chest will be punished by some of the most consistently relentless bass currently on the market. Transformers exists not just to sell merchandise (although that’s 90% of it), but it’s also to deliver all that Hollywood can offer during it’s grandest spectacle. This TrueHD mix is up for it.

All bonuses carry over onto a separate bonus disc. Above and Beyond is the big one, a five-part making-of with a self-congratulatory tone. Nearing two hours, nothing seems missed. Uncharted Territory digs into NASA, their history and future. It’s a nice base look at 26-minutes. Multiple effects deconstructions and production art come next, with five featurettes trailing. Unlike the prior two Transformers, Michael Bay doesn’t offer a commentary.