Empire needs a New Hope to survive. It needs Jedi and its bouncy Ewoks too. It doesn’t work as a standalone film and never will, saddled between others and expanding on one while setting up another.

There’s nothing wrong with that, Irvin Kershner’s direction more personal and dramatic, perfect for a tale that is aiming to squeeze both of those qualities into this special effects extravaganza. But, on a personal level, it’s always been confusing as to why Empire Strikes Back is regarded as the best film when it doesn’t stand on its own.

To deflect the impending fanboy rage, if that’s at all possible, Empire is just a middle act, having no real conclusion, just a jumping point. Combined with the other two films in the original trilogy, it’s no surprise that this stands as the strongest, deepest act.

It serves to deepen character, enrich backstory, and drop one of Hollywood’s greatest twists as Luke Skywalker (Mark Hamill) hangs precariously inside the inner core of Cloud City. It’s leisurely paced because it can be, less focused on developing a universe, and more focused on delivering those sights and expanding what audiences know.

Fox’s involvement comes in the form of a grander budget, the studio seeing what Lucas saw when they shunned him just a few years prior. It’s fascinating how attitudes change around money. Lavish effects sequences celebrate the Millennium Falcon, dipping through asteroid fields and grazing Star Destroyers. Much of New Hope was desperate to deliver visuals like this, it’s opportunity coming in those closing moments.

Empire is romance too, the budding relationship between Han (Harrison Ford) and Leia (Carrie Fisher) instituting a clever sense of humor and dramatic tension. Han’s line before being frozen in carbonite becomes a diminutive part of his character, “I know” as a dry response to Leia’s admission that she loves him. Compared to what Lucas would drudge up for the prequels, romance might as well be considered dead. Empire conquered it.

There’s more to focus on too, from the Frank Oz puppet work, Hoth AT-AT battling, the philosophical ramblings with Luke’s Force training, and the way the film will find a way to tie it all up for the home stretch in Jedi. Every piece of it is brilliant, every move it makes classic, and every element concise.

But, it’s not the same without Jedi hooked on and the Death Star battle of New Hope. 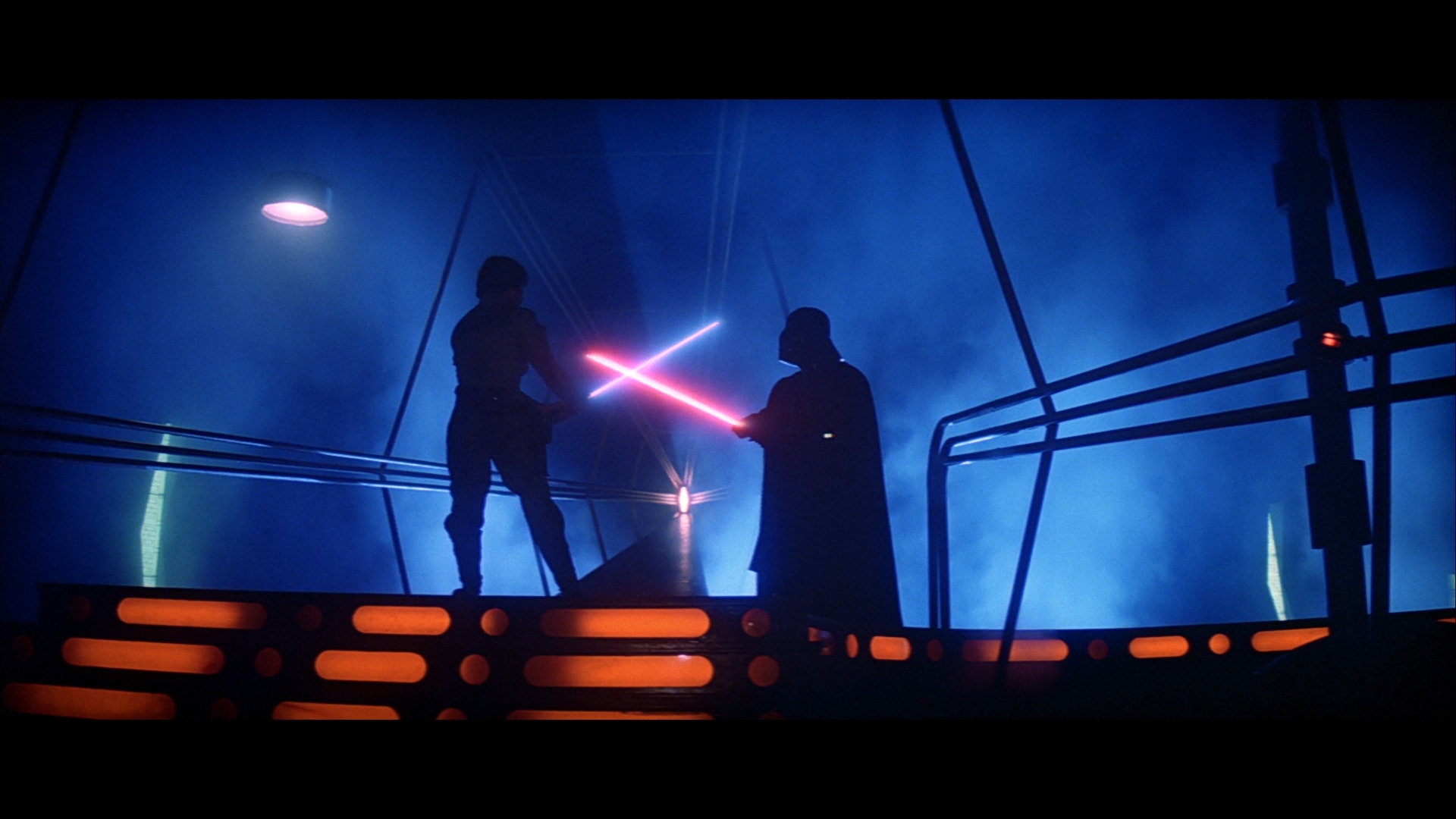 Post-New Hope, Empire becomes an interesting case on Blu-ray. Fox maintains their commitment to ringing everything they can from these encodes, almost filling a dual layer 50GB disc with a +30Mbps AVC encode at all times. However, if you’re encoding a source that feels tampered with, your bitrate becomes irrelevant.

No, Empire is not a Universal butchered disaster; far from it. There’s that overwhelming sense that there’s more that can be found on this print than what is being delivered, more so when compared to New Hope. Detail simply isn’t as prevalent or as obvious. It looks dated, not just in terms of the release date, but in terms of the master. Things here are slightly fuzzier, less refined, and at times blatantly filtered. The grain concerns which led to noticeable noise in a few shots of New Hope are not returning, but neither is the grain structure at some points.

Sometimes is comes across as clear DNR, other times just an artifact of the source. Only one of those is acceptable, especially for a release with this much caliber. Faces can appear smothered and smoothed over in a number of scenes in medium/distance shots, bright light a saving grace. Those scenes with focused light are some of the few where that real stern definition will be allowed to breathe. Some of that comes from Fox’s (or maybe Lucas’) attempt to darken this one up. Shadow detail is expected during the climatic brawl between Luke and Vader, but it shouldn’t be this notable elsewhere.

All of this may sound brutally harsh, and it is. Were this a lesser release most of these brief flings with digital tampering may go unnoticed, but this is Star Wars, and we’ve bought these things enough. The reason to purchase this set is to look at these films like never before and hear them on the same level. When Empire is at its best, it certainly lives up to that expectation, tweaked color timing and all. Hoth remains a deep, saturated blue, possibly popping here more than before simply because of the format. Flesh tones are again flushed ever so slightly, but consistently so.

The best scenes on this disc are those with the models, the intricate pieces of the Star Destroyers or the Falcon simply remarkable here regardless of distance. You’ll never appreciate model work anymore than this. Space is a bit of an escape from this marginally disappointing transfer, but even at its lowest point, Empire shines. The work was still put in, even if it looks like it might have been from a few years ago, not the recent remaster as promised. It’s not anymore easier to swallow (especially for a format selling box set), but it scrapes by… barely.

Once past the opening story scroll, Empire begins firing on all cylinders. Imperial Probe Droids begin flying from the underside of a destroyer, the DTS-HD 6.1 effort capturing each as they whiz by. That extra rear channel has not been forgotten. Then, one of them hammers into the surface of Hoth, resulting in a mega-thud that is totally sufficient for such a hit. The planet’s harsh winds pick up, enveloping the soundfield like few discs can do, and this spectacular audio design just keeps going.

This is not a disc afraid to punch a subwoofer squarely where it hurts. Engines roar, AT-AT walkers stomp, Tie Bombers make their run, and asteroids make contact. Every single blast is accompanied by some type of thud, those jolts varied in their intensity to give weight to those things that need it. This is cleaner, tighter bass than what was heard in New Hope, fitting into the mix like it’s always been there, not just an extension of a remastering.

Materials are in better shape too, expanding budgets giving way to better audio recordings. Dialogue stays consistent, never faltering to any damaged source faults. Fidelity is as clean as if it were recorded a day ago. The John Williams score is presented with supreme heft and power, little pieces like bells and small rattles now clearly audible, usually those softer pieces lost to compression.

Like the other discs, Star Wars in all forms is about maintaining a fantastical universe, and that’s where audio design comes in. Empire is rich in atmosphere, from the heavy rains of Dagobah to the echoes on the interior of Cloud City. Explosions on the surface of Hoth resonate into the command room, connecting the battle on the outside to the interior narrative. Nothing has been lost to age here. If anything, it’s only become better with time.

The Empire disc itself contains two commentary tracks. George Lucas, Irvin Kershner, Carrie Fisher, Ben Burtt, and Dennis Murren make-up the chatty group of the first track. The newly composed archival track brings in quotes from 23 different members of the cast and crew, as in-depth as you can get.

The rest of Empire’s extras are on a separate disc in the box set, ready to be reviewed at a later date in the interest of being as thorough as possible. The score reflects the film’s disc only.