Paramount sure is in a rush to get that Avengers movie moving. Unless you’re the type who is keeping a vigil over all aspects of the production, Hawkeye’s (Jeremy Renner) pithy cameo in Thor will go unnoticed. Fans will cheer at the sight of the bow, others will wonder why he ditched the sniper rifle.

Thor is yet again a film struggling for its own identity, Paramount cranking these things out at a furious pace to ensure their millions poured into the super hero all-star epic is insured. You can’t blame them, but the constant pandering towards the geek fest feels intrusive, never allowing Thor to breathe on its own.

That’s made all the more depressing as this world of Asgard presents such grand opportunity, leaving Earth (somewhat) for a little bit of wormhole traveling, robot bashing, and daddy issues. Thor (Chris Hemsworth) ends up banished by his father, and Anthony Hopkins is not a man you want to see scorned, more so when he’s your own flesh. Dopey Loki (Tom Hiddleston) takes over, obviously in it for the power, his grand plan eventually backfiring because if it didn’t, there wouldn’t be a movie.

There’s a fine contrast here, that of the golden architecture of Asgard and a dusty little New Mexico town. Dropped to Earth, Thor begins to make the moves on Natalie Portman (who wouldn’t?) and her science-y mind. The always prevalent SHIELD makes their appearance, forcibly here, struggling to come to terms with who Thor is. The SHIELD dynamic isn’t as interesting as it was back in the Iron Man series, mostly tired now, but it does lead to the best gag in the flick, a small riff on Stark as an enemy machine drops in to play.

Yes, Thor carries a sly sense of humor, Portman managing to slam into Thor twice with her car after his Earth-realm drop. The fish out of water tale commences as Thor adjusts, his manly man approach disrupting this New Mexico town and forcing them to purchase more coffee mugs. Director Kenneth Branagh mixes the playful with the emotional, capturing a summer movie base without offending the source material.

It would be hard to ruin it, the menagerie of visual prowess effective in delivering those tight, other-worldly visuals. They bring creatures to life, the ample-sized Frost Giants convincingly crafted during a number of high-energy action fests. Those are, as with any Hollywood summer fare, Thor’s greatest asset, although all is not lost elsewhere. There’s enough character here to get by and create that family dynamic that becomes crucial in the closing moments, and surely a means of driving The Avengers too. Why else would we be here? 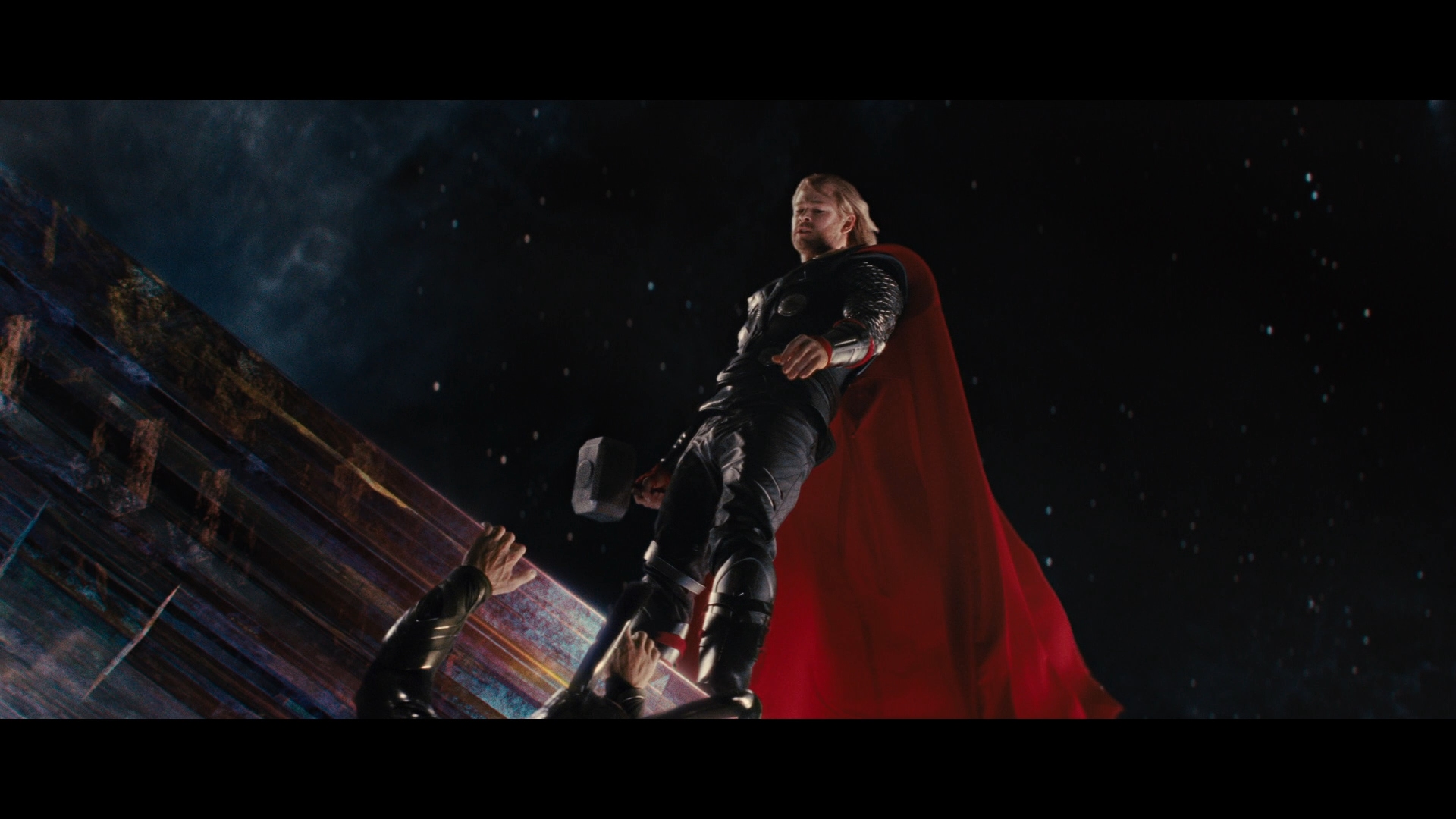 Odin’s kingdom or realm is rich with color, so much so that is has a rainbow bridge, somewhat unmanly for such heavily armored men willing to die in battle, but whatever. It’s crucial that bridge bring out the color because the rest of Thor will be teal… and orange. With another helping of teal. And then back to orange. Then into an aneurism caused by the orange and teal. Because it’s stupid. And ugly.

That quaint little New Mexico town is a relief, warm but not offensively so in the daytime, natural browns still a bit saturated, and skin actually looks normal. It’s a far cry from the interior of the SHIELD facilities, even their hyper-expensive computer equipment displaying orange and teal, the only two colors that matter of course. After the expense of the computer equipment, why not save a little on two-tone monitors, right?

Color frustrations aside (and that’s tough to ignore), there are only negligible complaints to take note of elsewhere. Fine lines will struggle to remain precise, breaking up from a mild aliasing attack. Good luck finding it during casual viewing. A shot or two will appear smoothed over, certainly a departure from the standard this AVC encode from Paramount establishes from the get go. Thor’s Blu-ray carries enormous texture in close, and those sprawling CG vistas of Asgard are brilliant in their definition.

Grain will prove sufficient, enough to know that this 3D shoot was captured on film. Only the hazy smoke of the Frost Giant’s world will produce any notable noise. Black levels are dominating when they want to be, keeping the depth heavy during the countless scenes in the dark. There’s no loss of dimensionality here. Contrast will counter that with equal force, leaving the image with enough heft to satisfy.

Audio will hit hard, enough to be convinced that Thor is one mighty dude. Bass will be substantial almost instantaneously, an opening storm sequence enough to dazzle with its power. Fight sequences, including a booming Frost Giant war, pushes Thor’s hammer into the sub which is the only place it belongs. Anywhere else would be insufficient.

The later battle against the robot in the small town will level most of the small businesses in the area (hopefully State Farm is there), his flame head thingy blasting off with little regard for personal safety. Each shot will fire, hitting the sub and panning through the soundfield while debris scatters. It’s right up to the miles high expectation for summer blockbusters in the home, this 7.1 mix taking advantage of all available channels.

This isn’t much of a case for subtlety, Thor proud of its accomplishment. Still, those moments of downtime, character development, and minor comedic acts all have their share of this quality mixing. Dialogue is brought up in the jumble to ensure those thunderous (literally) jolts of bass are right in line with the chatter. It’s a level playing field, appreciated for a movie gunning to be so loud and epic.

Kenneth Branagh goes for a solo outing in the commentary track, a shame considering the potential for more technical notes with regards to the effects. Still, the information is recommended for those interested. Marvel One Shot is a short that further sets up The Avengers, including an appearance by Robert Downey Jr. Six featurettes are varied in length, transitioning from a basic making-of into more specific bits on casting, effects, the score, and production. Sadly, there’s no “play all” option.

Road to the Avengers is another piece for 2012’s mega-blockbuster, as if there wasn’t enough already. It’s just another car on the hype train, a poor bit of promo-ing that offers little in actual detail. Eleven deleted/extended scenes run near the 25-minute mark and come with an optional Branagh commentary. A small selection of trailers remain.