Sit back and allow yourself to be taken back to the terrifying year of 1966, a year where… um, stuff happened in a mental institution? The year doesn’t even matter to The Ward, using it more or less as an excuse to show off some vintage shock treatments. The way Hollywood treats insane asylums, it’s not like it would have been any less appropriate for 2011.

The Ward uses its singular, cheap locale as a grandiose cliché, John Carpenter utilizing the halls as sort of homage to Nightmare on Elm Street. A typical view looks more like the famed horror boiler room than a medial facility. Crazies roam the halls, rock back and forth in chairs, lay on a sofas, stare blankly at the walls, and they’re controlled by a nurse who is trying for her best Nurse Ratched. It doesn’t work.

Our lead though is Kristen, a girl caught wandering the forest and burning down a house, committed after being caught in the act. She doesn’t believe she’s crazy, yet keeps seeing some demonic, CG-enhanced ghost in the strangest of places. There’s a little zaniness going on.

The Ward plods along at around 80-minutes in length, failing to produce the necessary atmosphere, and playing second fiddle to an assault of familiar tricks. Spooky thunderstorm? Of course! Power outages? Why not? Jump scares en masse? Well, duh.

The film comes across as one step above a Sy-Fy Channel original, John Carpenter’s name being attached to it as a director more of a shock than the twist ending. The gaping, Sarlaac Pit-sized plot holes that opens up the finale more detrimental to the mind than the creepazoid ghost.

The kills (assuming you’ve come for the gore) are all done with various psych ward equipment of the ’60s, totally detached from the rest of the narrative too. There’s zero tension behind them, one of the other locals strapped onto a gurney then tortured until the life is sucked out of them. No one will find them because no one sees anything of importance, all of that attempted to be ironed out with a few lines of dialogue in the closing moments. There’s not a M. Night Shyamalan ending on the books that will save The Ward. 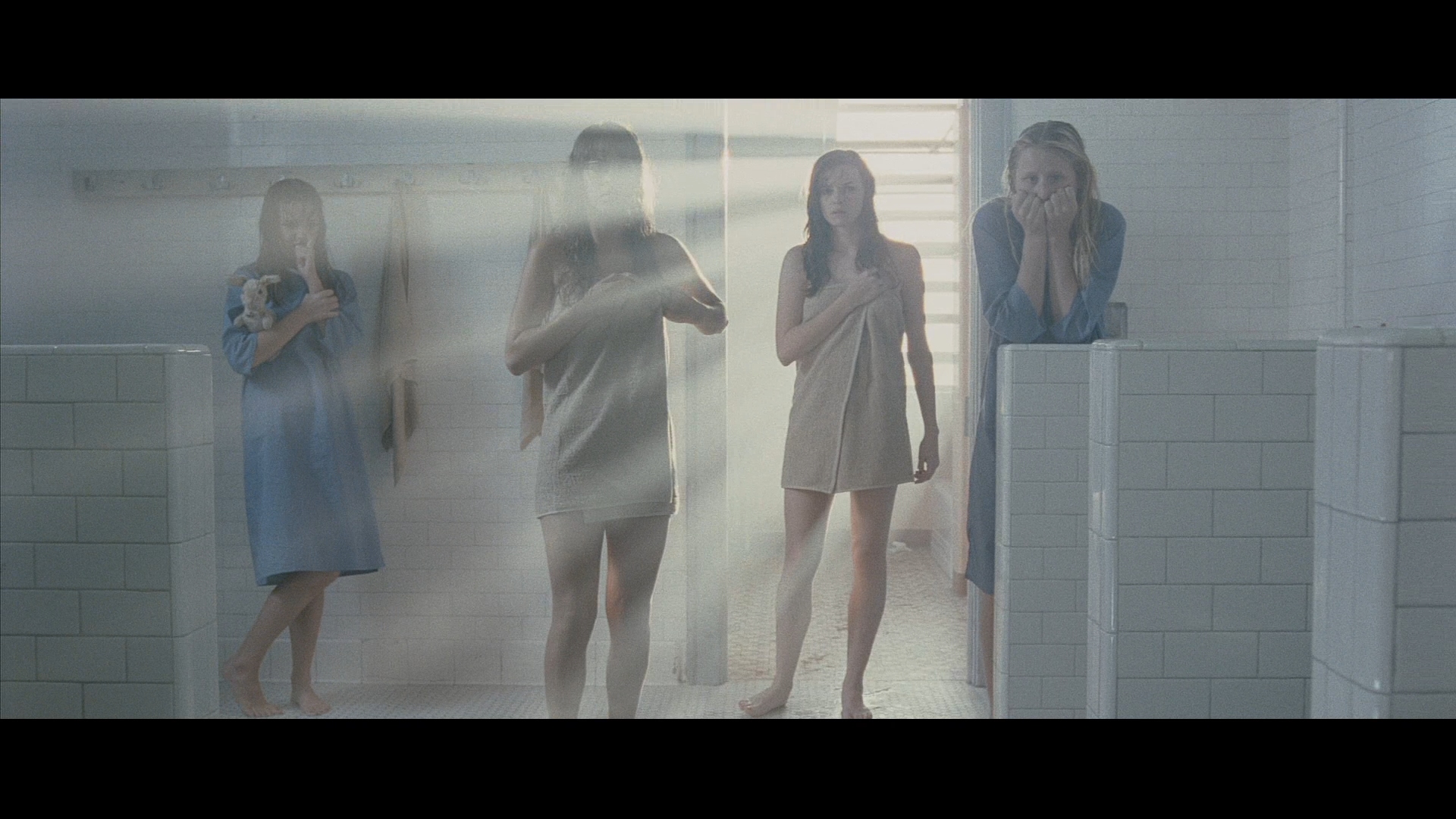 Arc Entertainment issues this one to Blu-ray, an AVC encode that can’t hold its own against what appears to be a routine grain structure. It’s breaking down with regularity, damaging an early view of a house burning to the ground as it collapses under the pressure of the smoke, and delivering banding on the walls of the institution. Mild spikes send it into a frenzy, and few frames appear held together like film should be.

Hints of aliasing and some harsh edges certainly don’t help, the film ever so slightly sharpened for reasons not entirely clear. Mosquito noise, another fault of the inadequate compression, makes objects stand out further. Mild halos give the image an imperfect quality, as if it didn’t already have one.

Black levels are drab, The Ward certainly going for an intentionally washed out appearance. Contrast never reaches a high point outside of dream sequences (where it blooms for effect), the bland fluorescent lighting never enough to help the visual flair. Then again, it’s not supposed to. Colors follow the same bland path, scrounging for any intensity yet never finding it. The Ward looks like something almost untouched by a digital intermediate, scanned right from the negative and untampered with. That’s actually not the case.

All of these drab, mundane qualities cannot detract from an adequate, pleasing level of definition. Close-ups are strictly defined and presented with regularity. Medium shots are not working in tandem, carrying a slightly filtered, flat look that is likely caused by the irritations of the encode. Exteriors, despite the aliasing and/or shimmering, provide the best shots of distance, bricks individualized and precise.

Sonically there’s little if nothing going on, the score totally forgettable and hopping into the surrounds with hardly any zest. Jump scares are resoundingly loud and wildly out of balance. Much of the movie deals with the girls trying to sneak out of their confinement, quietly working their way through the facility. There’s not much opportunity to work the surround setting.

Even when it does, say an action scene where the ghost is taking charge, The Ward might as well not even acknowledge that it carries modern sound design. Dialogue isn’t spaced at all, the barren rec room offering an echo that sticks to its devices in the center. How dreadfully boring.

You can view the trailer, or watch the film again with commentary from director John Carpenter and actor Jared Harris. The extras are as dry as the rest of the content.