Priest’s final line of dialogue is, “It’s just beginning,” that in reference to a vampire horde regaining a foothold on a battered society. Writer Cory Goodman probably didn’t write that in the script, because why would he? It doesn’t make sense from a story standpoint, it doesn’t click with the audience, and it assumes that just because Priest has some vampires, it would have a sequel.

Well, it won’t. Priest flopped domestically at the box office, which mostly means in eight years when no one remembers it, Sony will toss out a direct-to-video dud utilizing its name and not much else. That’s all the market will really bear anymore.

That’s not getting into the heart of the issue and why no one will remember Priest, and that’s mostly because its stupid. We have vampires that have been sent to interment camps, the Catholic Church which rules over a Blade Runner society, and a finale pulled from the most inept western ever filmed. In other words, Priest is a sci-fi, dystopian western vampire movie. It rolls right off the tongue.

It’s the type of modern Hollywood that just wants to show itself off, bringing forth scenes of lavish action just so some 3D effects can be inserted in slow motion. The vampires are either a mixture of human/vampire or some bland blind blood suckers, another aspect that rolls with the punches. The CG creations are not fickle about their meals, continually attacking Priest (Paul Bettany) despite his endless extinguishing of their kind.

Priest concludes with the American western stand-off, hero and villain facing off to settle their differences without any regard to the audience’s boredom level. Maggie Q pops in to inexplicably blow up a train with a motorcycle, explosions happen, and Paul Bettany teases the sequel that will never happen. If it does though, let it be like the opening narration, a wonderfully animated bit of backstory that is gloriously violent, unique to look at, and about three-minutes of bliss in an 80-minute movie. 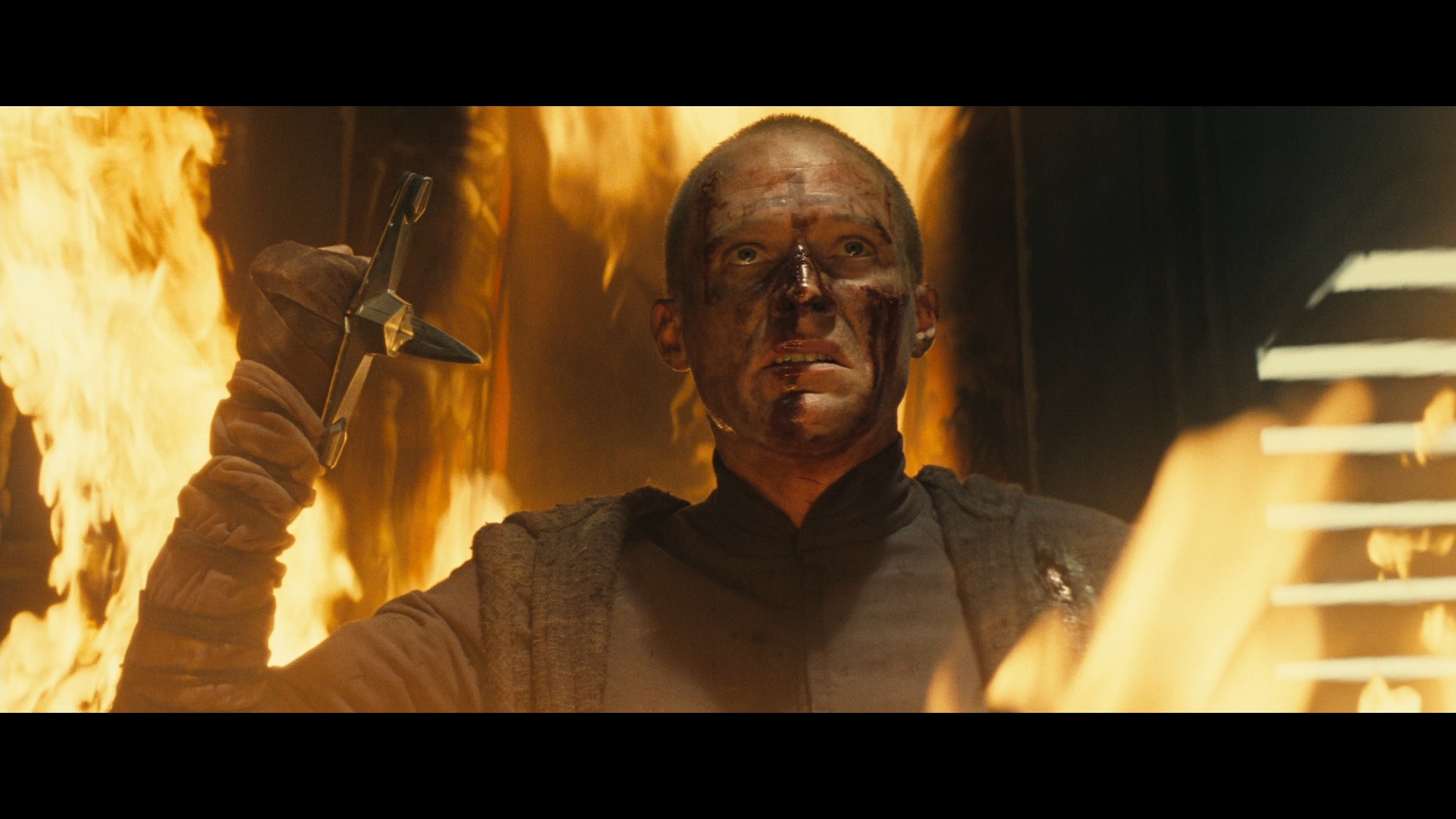 There are two lighting schemes in Priest, one meant to instill some sense of horror and fear in underground caverns, the other existing to shock the system or wake up those who fell asleep. The latter is the blazing outdoors, the alternate Earth not only devastated by a vampire war, but also succumbing to a sun that must have moved a few light years closer to the planet. If nothing else, the light play is vivid and undoubtedly contrasty, and the Sony AVC encode doesn’t do much (if anything) to hamper it.

Sadly for all involved, Priest was shot in color. No, it has nothing to do with a longing for black & white, just a need to see, you know, color. Interiors are drenched in deep blues and pale flesh tones, meaning vampire or human are tough to tell apart. The train cars look like someone vomited teal over the film frames, blood suckers here a monochromatic bunch. Whatever the reason, it’s ludicrous. Exteriors veer a different direction, the impossible to miss, heavy light sources washing the frame of its teal sins, pale in the extreme yet somehow still more pleasing than elsewhere.

You’ll struggle to find the grain structure, although rest assured that Priest benefits from the natural flair of modern film stocks. Retained as a result is lush texture, even on the goopy vampires who seen more concerned with drooling all over themselves than looking cool. Close-ups of Bettany and crew are richly textured, and the long cloak that seems totally inadequate for vamp brawling appears as a thick wool. Even in the darkness of the caves, not much is lost. Medium shots prove exceptional too, the definition and clarity providing the images with all the support they need.

All that’s left for discussion is the opening animation, beautifully sharp and producing no discernible artifacts. Lines are crisp and wholly defined, while the few colors utilized prove pure. Blood is certainly carrying considerable weight here, the reds vividly leaping from the screen, far more so than in the live action feature itself.

Priest is a stupidly showy movie, one that firmly believe it will dazzle with excess, an idea carried over to the audio mix. It’s less than six minutes before Priest will unleash everything, an assault on a small cabin home capturing vamp movements as they scurry about the roof and pound on the doors.

Diving into the not-Blade Runner cityscape, ambiance is generated from the speakers mind-numbingly telling people the church is saving them. Motorcycle engines rev up and take off to the outskirts with brilliant tracking, the stereos no stranger when it comes to movement. Fights will prove heavy and boisterous, dominating punches crunching bones with total unreality, and stiff winds will swirl around in convincing fashion.

It’s all building to the ending, the final brawls fought on a train with its booming engines and debris scattering abilities. Weapons are thrown towards the screen, zipping by gracefully. Maggie Q begins spinning her chain at 1:09:17, the effect exaggerated slightly, but it’s oh so satisfying anyway. Booming explosions will rattle the sub some more, and the loud, swelling score never gets lost amongst the chaos.

If you’d like someone to explain this mess then director Scott Stewart, writer Corey Goodman, Paul Bettany, and Maggie Q will honor that request with a commentary. If you still want more (who wouldn’t?), then a picture-in-picture feature titled Crossed and Crucifixes will suffice. Stuff contained inside of that bonus are not available anywhere else on the disc.

Seven deleted and/or extended scenes are included just because, followed by your traditional studio making-of, The Bloody Frontier. Tools of the Trade details weapon and vehicle design, and aside from trailers/BD-Live access, this disc is done.