Paul is about, well, Paul (voiced by Seth Rogen), but it’s also celebratory. It cherishes geek culture, is enamored with alien invasion movies, and worships the ground raunch was created on.

It’s certainly not apologetic about any of it, and the heavy-handed anti-religion jabs are hardly kind. Yet, it’s patently offensive with a firm purpose and sense of being. Paul doesn’t dodge touchy issues or sidestep them; it runs through them full force, head first, and comes out the other end unscathed.

Then again, this is from the geek-riddled mind of Simon Pegg and Nick Frost, Paul not necessarily a parody like Shaun of the Dead or Hot Fuzz. It has the elements of the traditional road trip flick, just with an alien who helped Steven Spielberg make E.T. in tow.

Pegg and Frost team up to save the little guy with a glaringly large package (yeah, what popped in your head is what it means) from government black suit types out to take him back. Paul crash-landed here on Earth decades ago, and the guys at the top decided now was the time to take him apart to see what alien innards look like.

Sure, it’s as threadbare as a plot can be, yet constructed carefully with a breezy pace and populated with likeable dolts, idiotic suits, mysterious voices, and a fun little twist in the end. That’s more than what expectations probably offer. Paul has a number of gloriously funny contrivances, written as such to make them into running gags, not painful plot devices. It’s staggering how many times these people manage find each other.

There’s a distinct audience for Paul, the type that will appreciate a hick town bluegrass band playing the Star Wars Cantina music, fireworks dinging the Close Encounters theme, and types who can pick up the one-liners from Jaws, Aliens, plus more. It’s not just endless pop culture jibs and clairvoyance, written with enough spice, wit, and satire to haul in those on the fringes of geekdom. Welcome aboard noob. 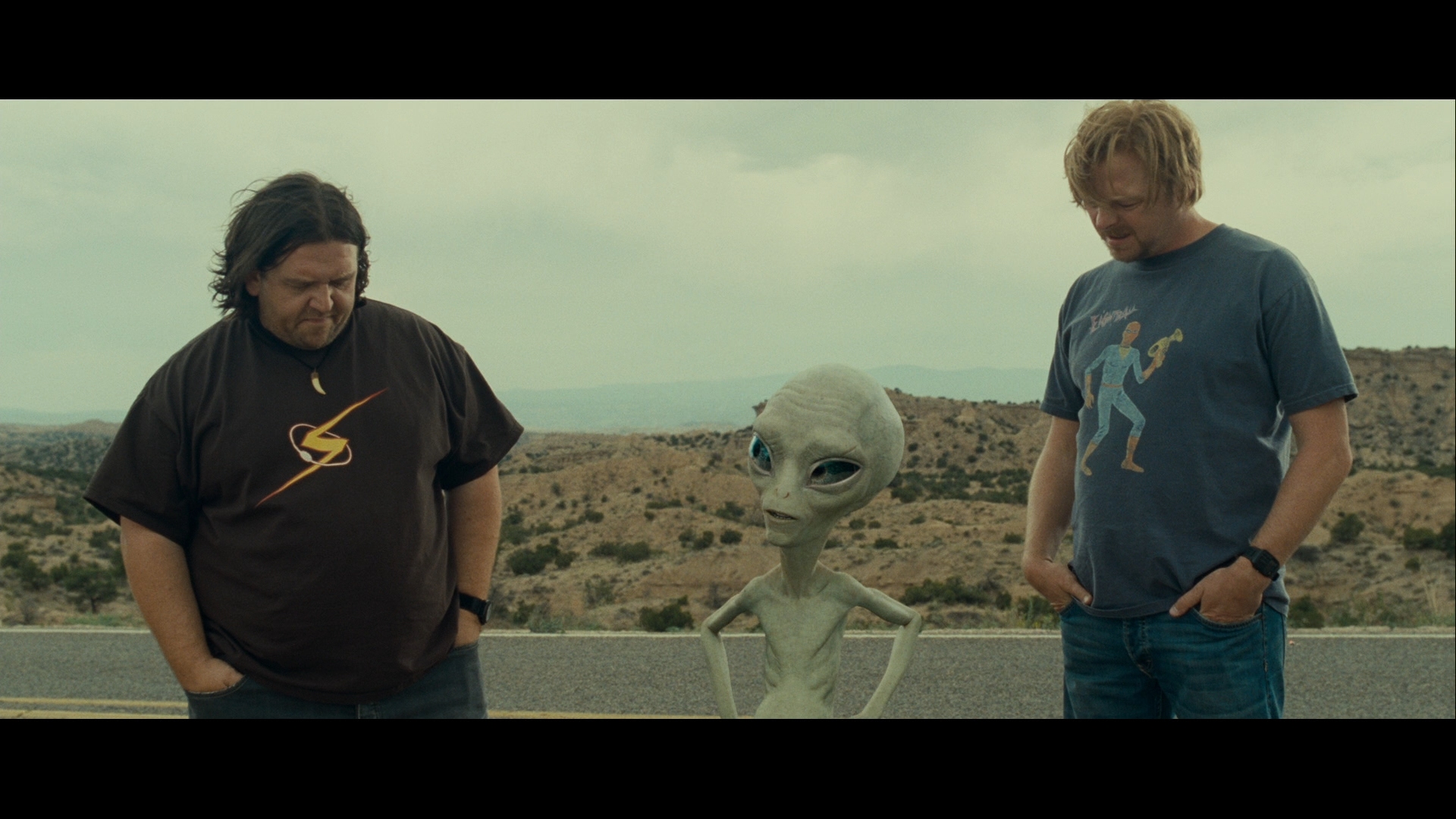 Universal delivers Paul to Blu-ray with a wondrous AVC encode, brilliantly clear and digitally rendered to perfection. A pristine grain structure dominates the image with a purpose, the compression never at fault or even entering the discussion. Heavy visual effects work don’t add any noise or other abnormalities, Paul sitting in as naturally as any human character.

Brightly, richly saturated, the film is standard comedy fare, flesh tones natural and primaries bold. Clothing is generally heavy on the color, the entirety of the film layered with various shades and hues. It never dives into a singular palette or scheme, a merciful change of pace from everything else in modern Hollywood.

Black levels prove exquisite, defining the dimensionality that will carry the film through to the end. Night skylines prove dominating and rich, the finale taking place in a dimly lit forest filled with superlative depth. Black levels never give up their end of the visual fight.

Textural detail is pristine too, everything from t-shirts to hair to facial definition. Paul himself is an admirable animated creation, his close-ups revealing complex eyes and slightly bumpy skin. Pegg and Frost are given a number of memorably defined zooms, while the intensity of the light always adds to the visible pores, hair, and stubble. Nothing about Paul’s transfer isn’t pleasing, superior sharpness never giving way to shots with an off-focus. Even the mid-range is a success, preserving the naturally occurring detail.

Paul’s DTS-HD audio mix is actually quite the disappointment. It has explosions, gunfire, UFOs, crowded bars, etc. None of it brings itself up to the standard expectation, totally drab from start to finish. When a house explodes in the end, you’ll wonder why the opening Universal logo offers more of a kick. It’s as if the sub doesn’t exist.

Surrounds are flaccid in their execution, the best part of the disc being cars and the RV panning through. Tracking is admirable, the stereos and the surrounds working in tandem for convincing positional work. That goes for a car wreck in the beginning too, fairly boisterous considering what else is here. Nothing else sounds like it cares. This DTS-HD mix can’t be bothered with the little stuff.

If anything, it’s balanced well; that’s something after all. Dialogue, including a little bit of appreciated positional work, is always precise and clean. Even amongst crowds, the key lines come through distinctly. It’s missing a lot of key stuff, although it’s never all that terrible either. Pass.

Blooper reels are always great, and this extended one at 10-minutes is worth it the whole way through. Between the Lightning Strikes is a 40-minute making of, natural and without a lot of the usual padding. Eight behind-the-scenes featurettes come in around an hour long total, each focused on something unique. Like the making of, these are worth watching too.

The Evolution of Paul is a 15-minute look at his designs and the decision to use CG. Simon’s Silly Faces is a brief bit of behind-the-scenes shenanigans, one of the few things here you can skip. Who the Hell is Adam Shadowchild is another weak one, a character montage of sorts that will only make sense if you’ve seen the film, and even then it’s a skipper. Three still galleries, trailers, D-Box support, and BD-Live access are left. It’s a great package even with the stupid stuff.