Preface: Kudos to the real Bethany Hamilton, redefining the word “trooper” and sending an international audience more inspiration than most of the planet would be capable of.

As for the movie based on her courageous rise, it’s a train wreck. It’s the worst type of emotional pandering, inserting singular purpose characters who do their thing because they have to. Poor Malina Birch (Sonya Balmores) is dreadfully written as the most stock villain to ever appear in a sports film, Carrie Underwood on the opposing side. She’s there to spout off something religious or positive, and then disappear from the script.

Sean McNamara directs with an eye for surfing, no question the menagerie of images captured inside and outside of the waves is utterly spectacular. Shoved into endless montages, they plague whatever minimal momentum Soul Surfer had going for it, although there’s a documentary crew out there dying for this footage. Soul Surfer has a story to tell, which it seems to forget with alarming regularity.

Bethany, here played with impressive skill from AnnaSophia Robb, is the surfer who made all of the headlines around 2004-2005 when her arm was tragically bit off in a shark attack. Soul Surfer doesn’t end the agony after a bloody paddle to the shore. After she leaves the hospital, it begins to pile on the pity, a family lunch sequence forcing Bethany to try everything imaginable with a single arm. Can she cut a tomato? Nope. Open the bread? Nada. Peel the plastic off some lunch meat? Of course not.

Soul Surfer never stops beating the audience over the head, wringing and forcing every ounce of emotional drama it can squeeze from its stale exterior. The height of its inanity comes as reporters begin latching onto the story, piling up outside Bethany’s house. Inside, her father is clearly waiting for Bethany’s arrival, yet doesn’t head outside until she arrives at home and the camera crews do their thing. How do you miss 40 people gathering on your lawn? Did the news trucks not make any noise? Was their chatter silent? In Soul Surfer’s case, it doesn’t matter. Whatever it can do to force the emotion is considered acceptable to this script. 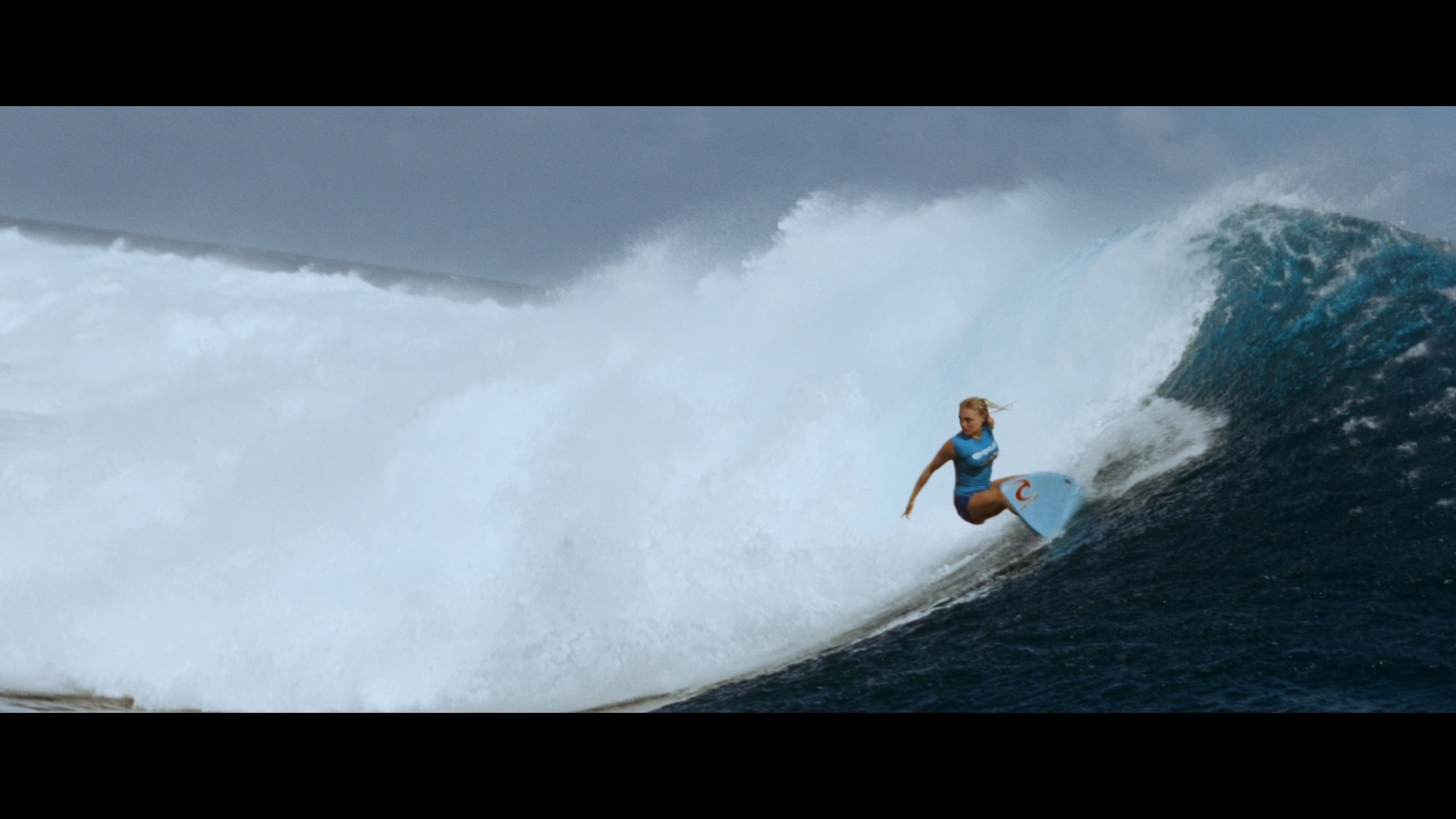 Shot appropriately on location in Hawaii, the digital intermediate phase warms this one up considerably, making the proper bronzed flesh tones work in its favor. Colors have a definite, rarely seen intensity here, the lush greenery of the islands and the brilliant blues of the water producing extraordinary pop. The location shoot was certainly not wasted.

Given a firm film-like appearance, the AVC encode from Sony proves sufficient to keep the sometimes jumpy grain structure at bay. Brief moments reveal definite compression faults, the grain taking on a noisy, digital look that doesn’t come across as the best it could be. These moments are limited to backgrounds, usually a solidly colored wall for a brief flicker of time.

Soul Surfer was shot with a firm focus, any anomalies in sharpness usually centered around Carrie Underwood who seems shot with some type of softening filter. The rest of the close-ups and medium shots produce extravagant texture, delivering a natural, crisp series of images that never lose their spark.

Set mostly in the brilliant sun that dominates daily life in paradise, Soul Surfer makes no attempt to elude the hot contrast provided by natural light. Instead, it soaks it up, giving the images a grand sense of dimensionality, and on the other end, the black levels are marvelous. A nighttime surf against the full moon is equally striking.

For a movie that surrounds itself with fantastic waves and constantly rushing water, the DTS-HD mix doesn’t do a whole lot. Sequences of Bethany inside the curls sound static, focused more on their visual prowess than the audio which doesn’t complete the illusion. Competition feels lackluster, competing surfers battling it out and entirely in the fronts.

When there is surround use, it’s not exactly satisfying, limp in the sense that the surrounds never make their presence felt, nor does it feel like they’re trying. Crowds gathered at the shore cheer their favorites on without any presence. The PA announcers have a better echo than the entirety of the ocean.

That leaves the music, a few select pop tunes enough to invigorate the track into something with a little spice and energy. Clarity is superlative, and lyrics bolt from the center with force. The whole thing offers balance, dialogue mingling with the ocean swells well enough, but misses its true calling.

Eight deleted scenes don’t fill in any burning questions or expand on any character, a waste of four minutes. A making-of is as standard as they come, while Surfing for the Screen becomes more interesting as it details the training the actors endured. Becoming Bethany has Robb detailing prep for the role and meeting the real Bethany.

Heart of the Soul Surfer is a half-hour documentary that follows Bethany’s true story, well worth watching. It’s better than the main feature. Bethany Hamilton on Professional Surfing details the pro surf scene and what it takes, leaving BD-Live access and some trailers in its wake.