Blitz uses its killer, a cocky, arrogant Aidan Gillen, as more of a suspense builder than a threat. Playing Barry Weiss, giving himself the media savvy nickname Blitz, Gillen creeps around the shadows dancing, playfully picking off cops, and weaseling his way out of trouble.

Any appearance by the media favorite Blitz comes with distinctive, ominous music. His first kill against an unknown officer going through the motions of a foot patrol nails it, disturbing and viciously violent. The next, as this serial killer seeks his vengeance, feel like they’re going through the motions. Eerie music, a couple of shadows, shots of the cop, guy in a hoodie, murder. Sure, serial killers are known for their precise ways, the ability to evade capture, and somehow avoid identification. Blitz manages to make every murder seem familiar.

That’s not to say post-death doesn’t ramp up the crazy, Blitz slaughtering a detective in his own apartment, sticking around for a bit to eat some snacks and play along with a TV game show. He is unnerving, almost too collected as he seeks his wildly misguided revenge for his prior arrests.

Counter-acting Blitz is Tom Brandt (Jason Statham), an absurdly hard drinking, heavy smoking, sexist wreck, most of the character traits stuck in the bottom of a bottle. He defies authority in an effort to be edgy, sort of like TV’s House, but without the spark or the genius. Blitz carries a needless subplot about a fellow officer spiraling into a mess of cocaine and alcohol, Statham’s character saving her from a self-induced demise if only to shine a positive light on a character that barely has any.

Brandt and Blitz never dig into the mind games, much of the film spent seeking clues, following trails, and dissecting witnesses. The film feels more concerned with patiently building a case to make the aggressive finale contain a little more kick than the rest, that surge of adrenaline coming too late for a police procedural.

Still, Blitz’s transition from the pages of Ken Bruen’s novel to Nathan Parker’s screeplay has tension behind it, even if it feels a little exploitative of its killer. Statham and Paddy Considine induce the film with enough credibility from their widely separated performances to keep the film afloat through to its speedy conclusion, even if it needs a life raft to get there. 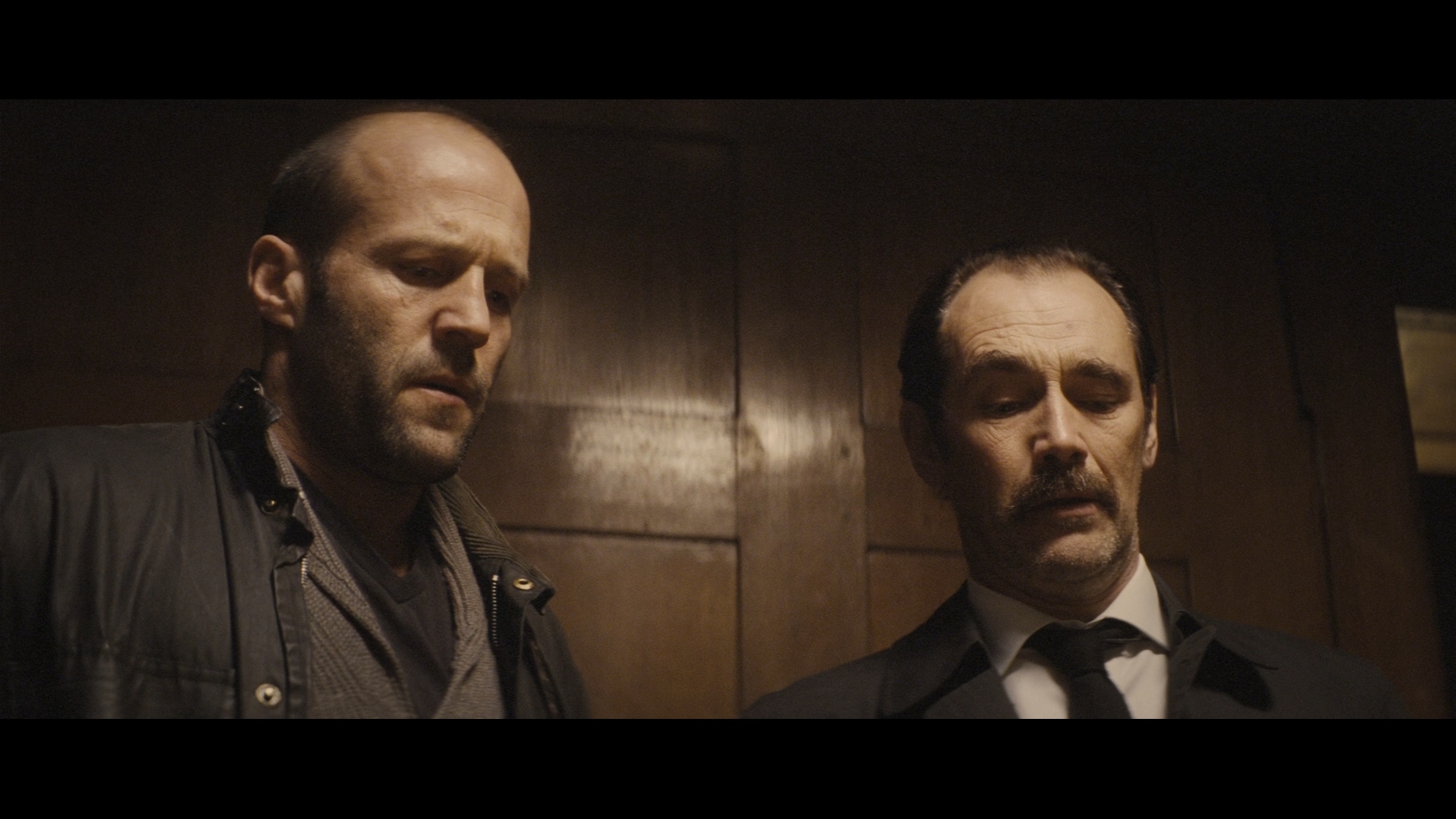 Blitz was captured on a film stock defined by a hearty grain structure, Millennium’s encode doing it justice in terms of preservation. The AVC codec works wonders to keep it controlled and contained, the darker interiors and dimly lit walls offering plenty of opportunity to collapse. It doesn’t.

The lens doesn’t reach for much in the way of fine detail though, limiting in terms of crispness. Blitz’s hi-def highlight are the city exteriors and aerials, superior in their sharpness and lifelike qualities. On a more human level, things have a sort of vintage look to them, both in terms of color and a light softness.

Dominated by warm, earthy yellows and browns, the film looks downright sickly. Faded is an appropriate word as well, black levels sapped of their intensity and the contrast slightly clipped within the grim interiors. If you left a film stock in the sun for a few days, this could be the end result. Then again, it’s just the digital intermediate talking.

Close-ups offer detail jumps ranging from superlative down to flat, medium shots much the same. Blitz never finds a detail groove, finding it sufficient enough to dabble in its hi-def glory and leave the rest to fate. While not sparkling or particularly pretty, there is a very controlled, purposeful mood being generated by the visuals. The transfer to Blu maintains that.

Millennium makes the choice of TrueHD for this UK theatrical effort’s home port, a miniscule audio design holding it back. The film just sort of starts, ignoring any credits, Statham wandering outside to thrash some punks robbing a car. He slams them into the windows and the metal, sick thuds providing the subwooder with a little bit of work. Future gunshots and the occasional beating will offer a reprieve from the mundane.

Outside of that, there’s little to even talk about, some electronica blaring at an exaggerated volume to makes its point felt. That’s more of a rarity than the action though. Dialogue takes a crisp, natural focus in the center, never splitting away to the sides. Cars drive past without any directionality and the streets are weirdly quiet, completely lacking in atmosphere. As dialogue driven as it is, there’s not much in the way of expectations for this either.

Cast and crew interviews are crammed together as one extensive feature that takes 32-minutes to get through, featuring the usual character dissections and reasons for taking the job. A behind-the-scenes section is comprised of raw footage from the set, always useful and appreciated. A stack of trailers remain.

Full disclosure: This Blu-ray was provided to us for review. This has not affected the editorial process. For more information on how we handle review material, please visit our about us page to learn more. Blitz has a street date of August 23rd.