Vampires bleed green goo in From Dusk Till Dawn, an attempt to push the movie past the censors, and it only makes you wonder why. The bar is titled the Titty Twister, heads are sliced off, a still beating heart is toyed with, a kid is eaten alive, the band plays a “body guitar,” and the number of shotgun blasts might be incalculable. Does it really matter what color vampires bleed after that?

Of course not, but this is Hollywood and the MPAA, so you’re better off playing it straight. Besides, what would the world be like without From Dusk Till Dawn? Probably a better, gentler place in all honesty, but hey, it gives Cheech Marin three entire roles. Isn’t that a fair exchange for the partial downfall of humanity?

Dawn is a gloriously gory effort, a B-movie given enough cred through Quentin Tarantino’s ludicrously funny dialogue. He’s probably the only person in film who can draw an audience into a vampire flick with a conversation between a low rent carry out staffer and a local sheriff. The opening banter is wonderful, loaded with quips, hypocrisy, and laughs, establishing a film where no one is considered a clean cut hero.

This is a two-fer of course, half heist thriller, half creature feature. Both prove effective, and the mix, as bizarre as it may be, somehow finds a way to click. George Clooney’s (then) wildly out of character cool, collected bank robber is enough of a central focal point that it can carry this increasingly absurd narrative through to its conclusion.

Slap that together with some appreciated practical suit work, rod puppetry, and now dated CGI, From Dusk Till Dawn becomes a little slice of ’90s exploitation heaven. Hell, it even has a point, if only for about three minutes. The local news media is picking on the robbery, offering an on-screen death toll tracker as the Gecko brothers make their ways towards Mexico, and unwittingly to a bar full of vampires. See, all of the boobs, vulgarity, and religious desecration do serve a purpose: to make a mockery of the sensationalist media. 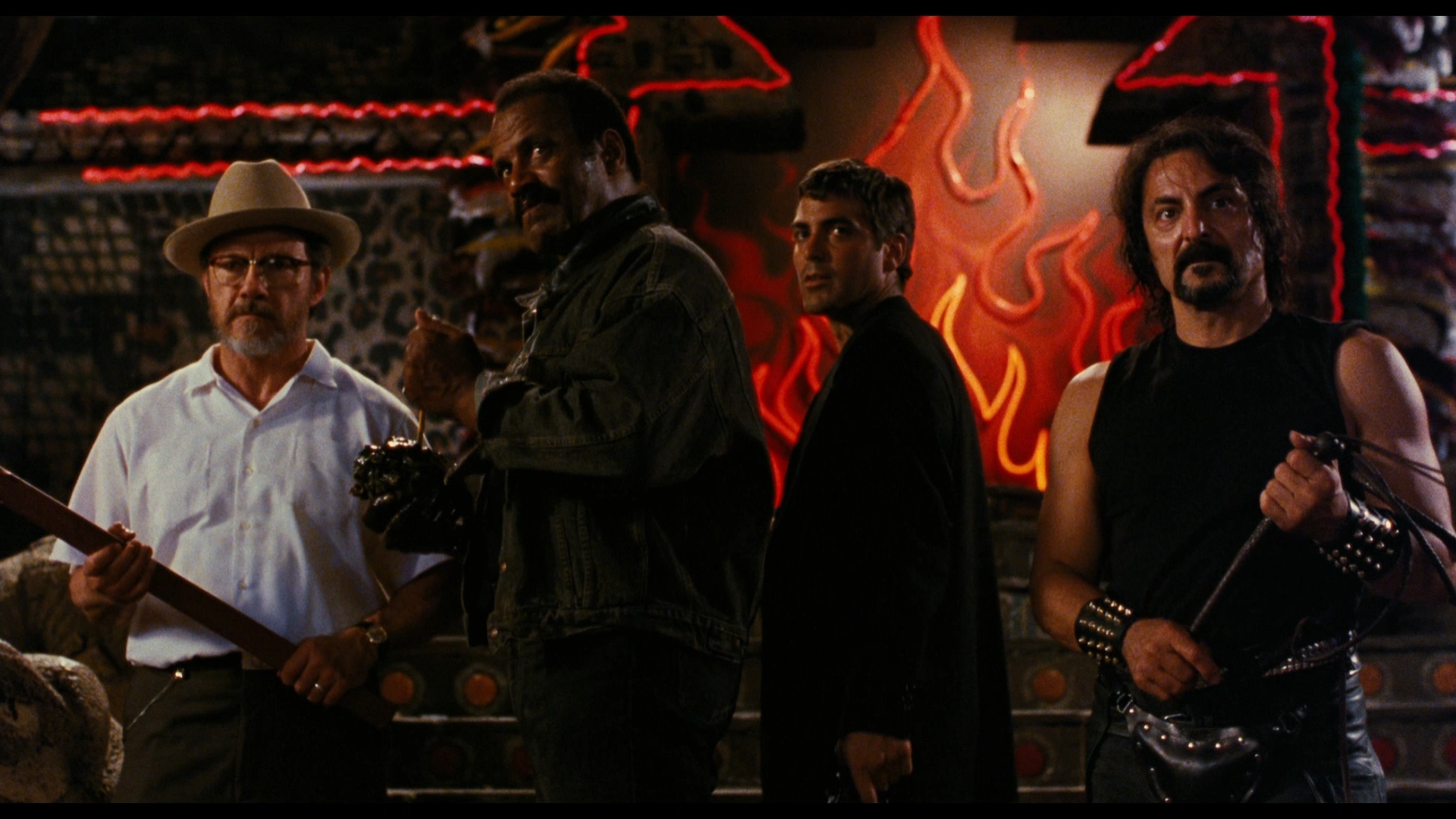 Well, one thing is for sure. When Echo Bridge bought out some of the Miramax catalog to release to the HD market, they could not have cared less about the elements they received. Dawn is a mess, the type of transfer that even the best encode isn’t going to salvage. Praise whatever all mighty being you worship that it’s at least a clean print, damage never a factor and the elements preserved. It’s safe to say no restoration work was done.

The master used here is the problem, an impossibly dated, soft, and inappropriate-for-Blu-ray piece of junk that never should have seen release. Black crush is beyond severe, the black suits worn by the Gecko brothers singular pieces for much of the film. Shadow detail doesn’t exist, giving the image a murky, dim quality for the entirety of the runtime.

If you want a comparison without having to watch it, switch your set over to “vivid,” or some other equivalent. If it’s already there, well, we need to talk… Anyway, what that’s going to do is slaughter your color (amongst other things), much like this disc which runs insanely hot. Reds bleed and flesh tones are scorched. The film was always warm, although not on this scale. Subtlety isn’t the film’s highlight in any regard. This, however, is something else all together.

Grain lacks any crispness, mushy and at times barely even part of the image. With most of what Universal is shoving out these days, maybe we should be glad there is any hint of the film stock left, and it’s not like the encode is causing it to appear noisy, right? The sole saving grace are the close-ups, at times wonderfully defined, although that has more to do with the intensely focused lighting than any skill in the mastering process or boost to the resolution. It wouldn’t even be that surprising if it were merely upscaled from 720p.

Audio has been given even less attention, the DTS-HD mix barely passable. Fidelity is the key concern, dialogue hampered by a hollowness and faded quality, not helped by an imbalance with the action. Gun shots, for all of their muffled pops, seem mixed a couple of notches higher.

Everything here sounds dated, again a total lack of restoration work gnawing away at the Echo Bridge name. If they had any credibility going in, they just lost it all. Sure, there’s some pleasing surround use, the bat assault once the front door opens active enough. Guns fire off in specific channels, the opening shoot out in the shop especially focused on pushing stuff into the rears, if for nothing else, just to have something going on back there. Directionality is limited though, and the high end doesn’t really exist. It’s all situated in a muffled middle, hardly worth the upgrade.

One word on the extras: nothing. It’s a small miracle there’s a chapter select.