Beverly Hills Cop wouldn’t be the same without its music. It’s not about some cheesy “pure ’80s” style, but a backdrop that becomes the perfect accompaniment to the shenanigans of Axel Foley (Eddie Murphy). It’s about the vibe of the film, setting a tone that is part ridiculous, part utterly convincing.

This is a classic, not just of the ’80s, but of all time. Eddie Murphy was in his prime here as the foul-mouthed, quick-witted, and in many ways brilliant Detroit detective tracking down the murderer of his friend. He weasels in and out of authority, pressure situations, and is quick to think on his feet. And thanks to that score, brilliantly conceived techno synth, you know when he’s about to pull something.

Conceived as a vehicle for Sylvester Stallone, it’s doubtful we’d be here discussing the film had it followed the path as initially written. Murphy is that spark that drives the film forward from the opening scene, undercover as a cigarette swindler, tracked down by officers who don’t know any better. What follows is an action chase sequence that only The Blues Brothers could top in sheer devastation. Police cruisers become expendable, and the city streets are more or less laid out for maximum destruction.

It’s impressive that Beverly Hills Cop even stands a chance after such a destructive display, yet once Foley becomes the proverbial “fish out of water,” the film draws in an additional life force. Murphy’s imitations and multiple personas defines what he could do with no restrictions, that current family friendly trend producing an actor that is Axel Foley, just without the wit, class, style, and all of the out of place confusion.

This is an iconic character, one the audience can latch onto and fall in love with. For the studio, it was a goldmine, at least until the series went under the direction of the otherwise capable John Landis. They couldn’t have picked anyone more inappropriate for Beverly Hills Cop III, the first film a masterpiece of tone, pacing, and flair. The third one not so much. For the audience, the first remains a piece of pure film bliss, a decade-defining comedic treasure. 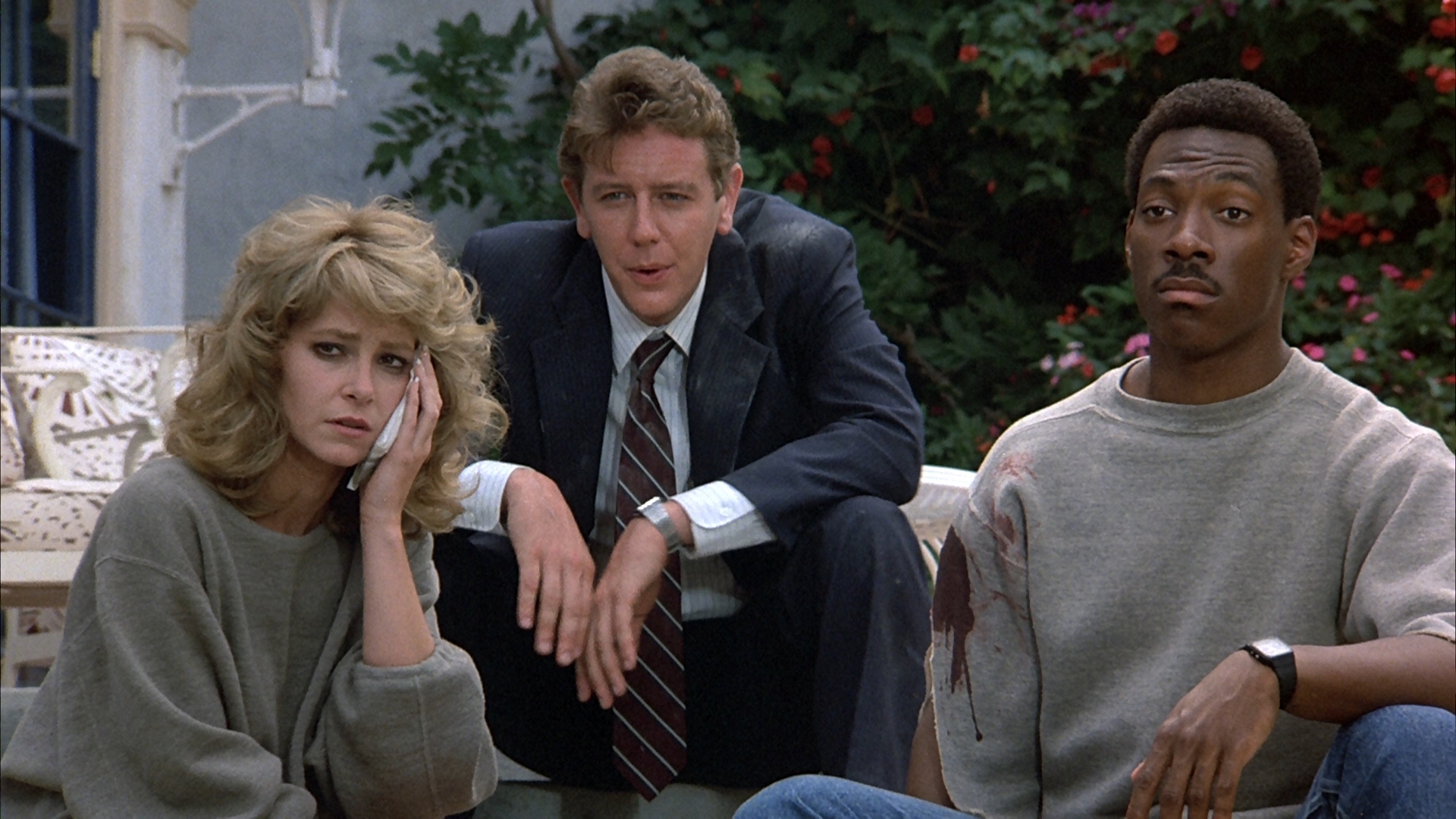 Paramount issues the film to Blu-ray as a single release, the two sequels left out in the cold (at least for now). This catalog effort is iffy although generally pleasing, the source material clean and well cared for. Specks and scratches exist over the physical title cards, free from interference for the rest of the feature.

The grain structure sits heavily over the image, but is left intact. This produces a visual appearance that is generally natural and firm, the disc looking like an ’80s film stock presented in digital form. The encode handles a number of minor spikes, artifacting cleared of any harm. Close-ups retain high-fidelity material from pores to fine hair. However, things begin to go awry when the camera pulls back, a wholly digital representation beginning to dominate. They look filtered and non-film like, which is odd considering the satisfying, sound look that is exhibited in close.

There’s also a harshness to the image, edges slightly unpure and even producing minimalist halos. High contrast edges at times seem to be showing a glow, again not a typical aspect of a film stock. That’s relatively minor, and mostly contained to the first act. Exteriors, such as the mansions and their luxurious, thick array of palm trees, are a perfect example of how this transfer can waver. At 59:08 as Foley begins to investigate the home, the trees are richly textured, leaves defined and clean. Minutes later at 1:02:20, the entire thing collapses, trees now blocks of mud, the definition voided.

Colors carry a little vibrancy, enough that’s it’s almost certainly the result of a little tinkering on the back-end, but nothing that invalidates the integrity of the source. If anything, it’s a matter of bringing the film back to its original luster. Flesh tones are pure, and primaries bold. Black levels, while sucking some of the shadow detail under certain lighting conditions, provide dimensionality where needed.

Paramount does the audio right, providing an uncompressed 5.1 mix that leaves the surrounds alone aside from a mild soundtrack bleed. It gives the songs some pep, “The Heat is On” lively filled in with the help of the surrounds over the opening credits. Fidelity is exceptional, and the stereo split effective.

The opening chase sequence proves a little dim though, the score overwhelming the sea of crushed metal and destruction. Some of those cars barely produce a sound when they’re blasted head on by a semi, the design diluted for the sake of the music. Elsewhere in this DTS-HD affair, gunfire does not suffer the same fate, the seemingly endless barrage of automatic weapon fire lazing ground with pans side to side. Some will find the lack of surround use distracting (and the low-end takes the day off), while purists will appreciate the limited tampering. The purists are correct.

Dialogue is free of any harshness, crackling, or other audio defect, balanced well amidst the action or music. It comes through the center naturally, and can easily stand out for something this aged.

Extras are pulled right from DVD intact and complete. Thanks Paramount, although you’ll still need the other two films to replace that DVD box set. A great commentary from director Martin Brest is well worth your time, followed by a fun half-hour retrospective, Beverly Hills Cop: The Phenomenon Begins. A Glimpse Inside the Casting Process details Stallone’s involvement, followed by another piece on the music, everything here produced with care and avoiding that boring promotional tone. A location map is what it says, linked to even more featurettes on how the set designers did their part. There’s a trailer for completeness sake too.