Love Actually’s sole crime is that it makes you fall for its characters. So, when Colin (Kris Marshall) introduces his plan to travel to America for the sole sake of picking up woman, we lose him. He’s gone from the film. We’re waiting impatiently for his return, eager to see if his plan was a success. The same goes for aging rocker Billy Mack (Bill Nighy), disappearing for long stretches, briefly seen on TV, and then so utterly forceful and brazen, you have to love the guy.

Love Actually is built around an all-star cast, the driving force behind this narrative that is intertwined in the various aspects of romance. The young, the old, the cheater, the loner, the Prime Minister, and the Billy Bob Thorton presidency. How could this movie go wrong?

This Richard Curtis piece (writing and also directing for the first time) gets away with a lot. It has the meet cute, two people bumping into each other when they reach for something. It has “the run,” where the male must make the run through an airport before the love of his life takes off forever. Unlike the other modern romantic clunkers, it presents these elements naturally, and wrapped up such an adorable, breezy, and at times dramatic package, they always make you smile. It’s as if Love Actually is showing how those elements can be used in the presence of legitimate material.

The film forces its cast into awkward situations, uncomfortable greetings, and a slew of familiar romantic devices that are familiar only because they actually do happen. It feels like the cast has room to breathe and make the material their own, Hugh Grant given a priceless dance number, and Bill Nighy running with his eccentric written rocker personality.

Each character connects with a co-star in some meaningful way, the female cast more than just fodder for the males, given their own set of ranged emotions and snappy timing. It dodges becoming the standard issue weepy too, Emma Thompson forced to cope with a potentially cheating husband and ramping up the Joni Mitchell for effect. It’s a pivotal moment, played for dramatic flair then quickly offset by the presence of young Thomas Brodie-Sangster, quickly learning the ropes from his stepfather.

Everything Love Actually does pulls you closer to its heart and warmth, never missing a beat. The whole cast seems affable, the type of people to want to watch and be around. This is a long one, breaking from the two hour mark, and in all honesty, the original three and a half hour cut Richard Curtis was working with would have been okay. 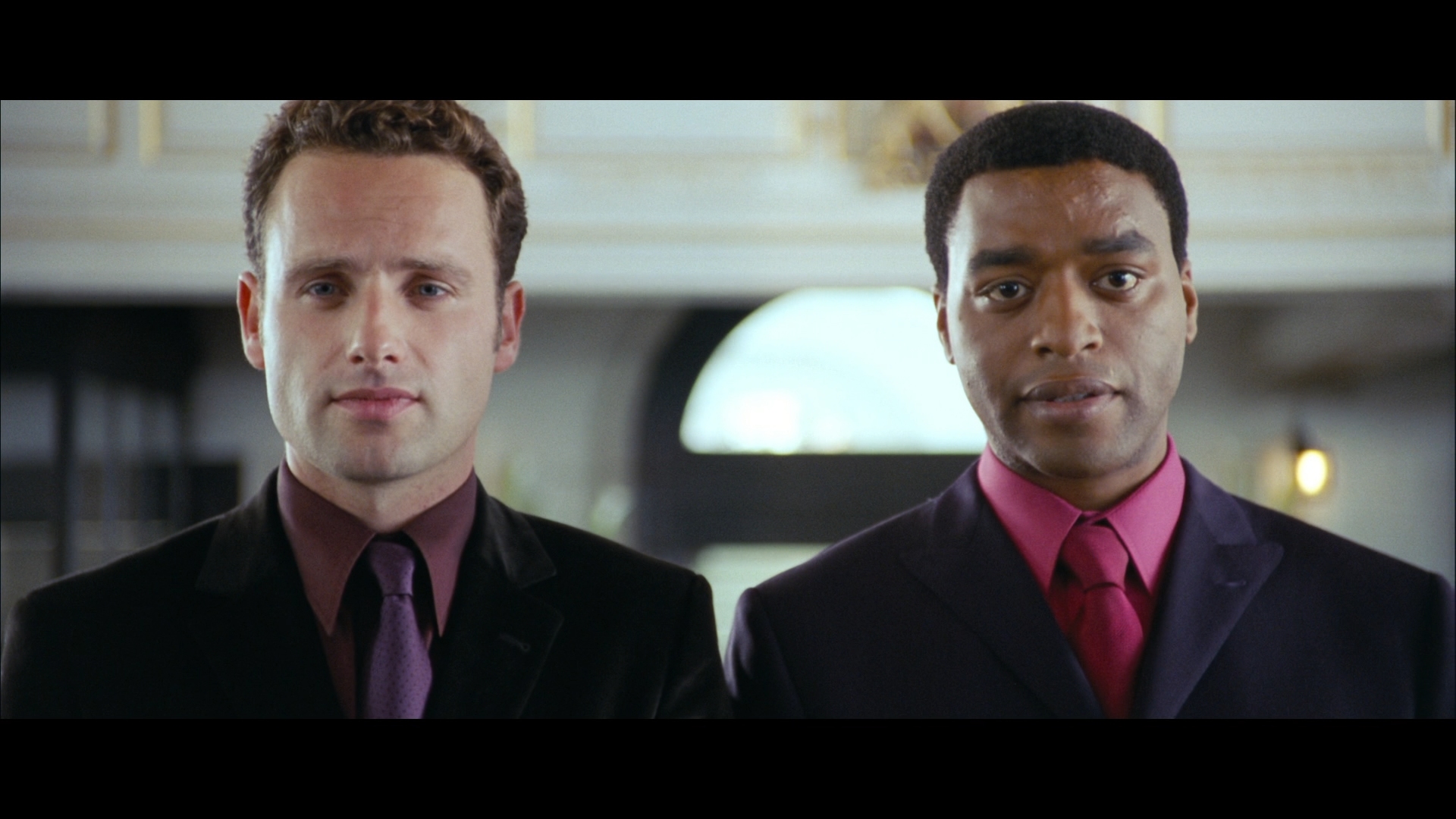 Universal issues this 2003 catalog title with an admirable VC-1 encode, cleanly presenting the material without too many faults. Most of it comes back to some fairly heavy chroma noise against certain walls, or a slight softness to the image that more or less suits the material. In other words, the latter isn’t worth getting worked up over. Arguably the most important thing here is that Universal let a catalog title be  released without issuing a sub-par master or slathering the thing in DNR or edge enhancement. Then again, it’s only from 2003, so it would be difficult to present this one poorly.

Love Actually carries with it a film-like look, the pleasing-to-the-eye level of film grain intrusive only when the compression fails to keep up. Slight moments of minimal damage are a sign this might have been tossed out there without too much care, but then again, the end result speaks for itself. Most of the detail is kept in the various London exteriors, whether those are houses or city views. Buildings are given exceptional definition, fine architecture exquisitely defined. Interiors can be well rounded too, kitchens dotted with various items, and the slow intrusion of widescreen TVs in the 2003 homes clearly visible.

Other details… well, they’re not so great. Much of this one is shot at medium length, keeping the camera out of a range where high fidelity facial detail can shine. It seems to get better come the second hour, while the first sort of flounders. There are no offensive instances of smoothing or other manipulation at work, leading to the quick assertion this is all part of the material.

Even better, the digital intermediate doesn’t swarm this thing in gaudy oranges. Flesh tones are beautifully natural and untampered with. Primaries are allowed to breathe and shine, elevated enough to give them life. Contrast tends to run a bit hot, especially in the airport sequences, while the black levels don’t quite share the same intensity. Indoors they even pout a bit, not delivering their end of the bargain. Still, they’re not awful, just not deep enough to really leave a mark.

Universal delivers a DTS-HD mix for this one, a surprisingly powerful at times track with plenty of clarity and weight. The highlight is a school musical, the sheer power coming from the lyrics and crystal clear drums (critical to the plot) simply brilliant. The film sits behind a number of pop songs, all of them elevated to a higher standard within this mix. All of the tracks are given a bit of vigor and life, even the ’80s stuff as Hugh Grant makes himself look like an idiot.

Numerous parties and other occasions creates crowded rooms/auditoriums, people in the background chatting or clapping where appropriate. The room-filling qualities are exceptional, the wrap-around effect keenly calibrated. Dialogue is consistent and pure. It’s one of those tracks that sneaks up on you given that the material doesn’t really call for much aggressive  sound design.

A commentary kicks off this set of extras, writer/director Richard Curtis joined by cast members Hugh Grant, Bill Nighy, and Thomas Sangster. Deleted scenes are intro’d by Curtis, and there’s a lot of them, about 37-minutes worth. The Music of Love Actually takes the viewer through each key musical moment. The Storytellers details this familiar romantic comedy team up (many faces from Four Weddings and a Funeral are back here). Two music videos, including the priceless Bill Nighy piece, “Christmas is All Around” are here, along with typical BD-Live access.