John is an alcoholic, and you will learn this. Oh, how you will learn this throughout Sacrifice. Is one sequence of him sitting in his kitchen, downing entire bottles enough to make the point? Sure. Sacrifice has to repeat it though, then show him in a church drinking gleefully with a priest, surround him with bottles full of liquor, and rarely show him sober.

Of course, there’s a reason for John’s alcoholism, an undercover job that went south after the fact, his entire family the victim. Don’t worry if you miss the first flashback either. You’ll be treated to at least three of them depicting the slaughter, a perfect example of how this is all weighing on him, and the patience of the audience.

You could merely yell at the screen, “I get it already!,” but that won’t make it stop. Only the fast forward button has the capability (or if you really want to put it to bed, the stop button works too), a merciful benefit of the direct-to-video clunker.

This all needs to wrap around a plot, John inserted into a drug investigation through a series of contrivances that have absolutely nothing to do with the murder of his family. Out of the window goes the usual revenge movie trappings, and introduced we are to a sluggish, sloppily put together film that never finds a way to connect the various going ons. Sacrifice has no structure, although even if it did, it still wouldn’t have much of a chance.

The film wants to wring dry every bit of emotional drama from this flaccid script, using kids in dangerous situations because no one would care otherwise. Sacrifice even abuses the privilege, John’s own daughter not only slaughtered in a home invasion, but another little girl enters his path, Angel (Arcadia Kendal). She’s being raised by her brother after their parents went kaput in a series of tragic instances, again a plot device to shove this forward with no real goal.

Sacrifice wants to make a point… or something. It book-ends with a bunch of static factoids about the war on drugs, and if the movie is against the fight on narcotics, it’s sort of hard to see that wrapped up in a narrative about a former cop who ruined his life due to alcohol. It truly is a shame to see Cuba Gooding Jr. stuck in these roles, especially when he’s surrounded by a pitiful supporting cast who fling out expletives to cover their total lack of emotion. He deserves better, and so does the audience. 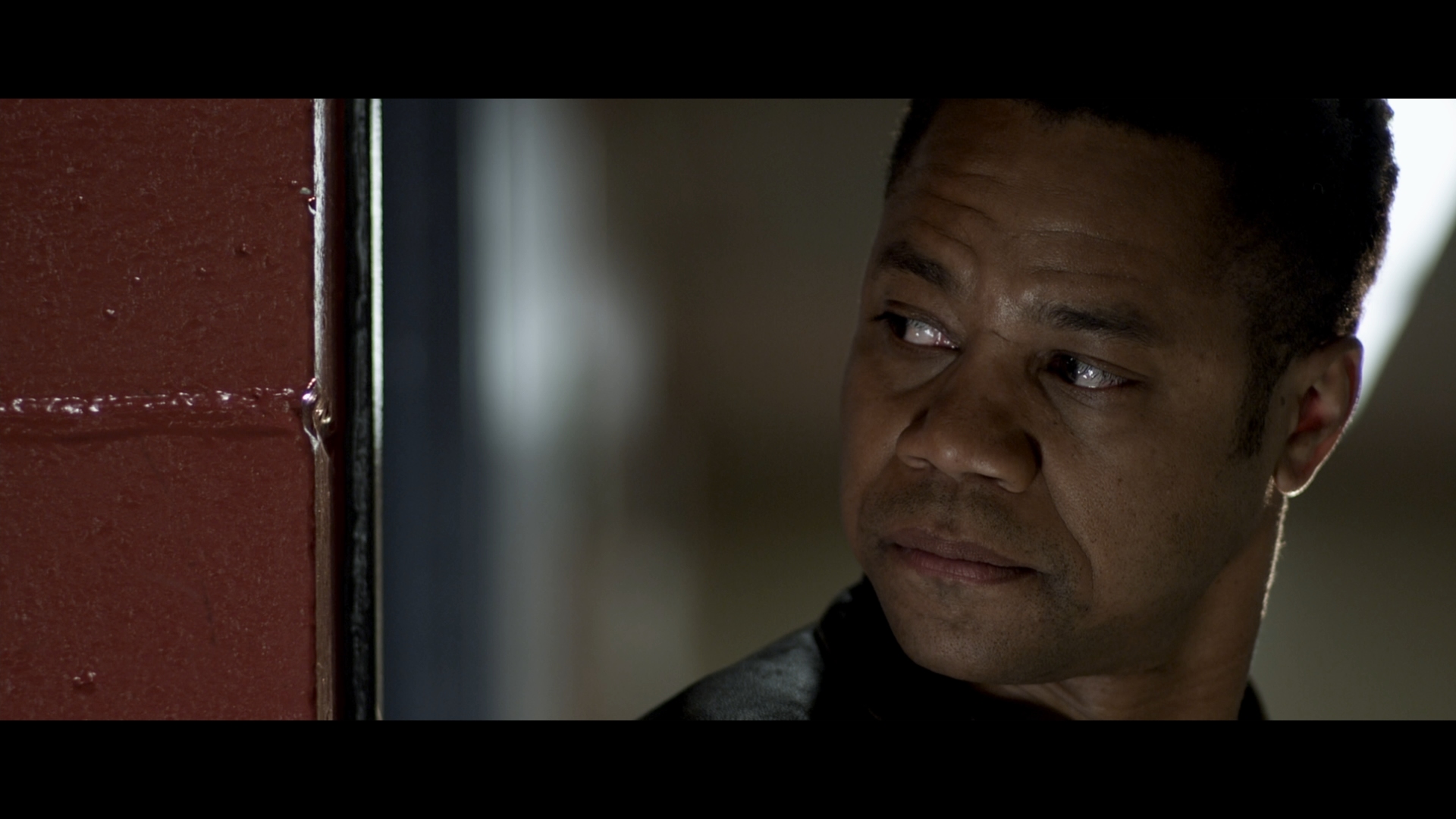 The popular, digital Red One gets put into use here, and from the opening shot of the movie, that of a house at night, the black levels are in trouble. They’re faded, bland, and completely fail material that needs all the help it can get. In fact, there’s hardly a scene anywhere in this movie where they come alive with any real depth or weight. Day or night, they keep this lackluster, blueish tint that is insufficient for just about anything really, let alone this project.

Maybe it’s a stylistic choice, the color palette intentionally dimmed and bland. Flesh tones are meager, primaries never engage, and the closest thing to a highlight is the opening action scene inside the hockey rink. The footage of the game is fairly lively, while the rest never comes close.

Everything appears soft, not far from what could be considered a natural softness mind you, but still soft. That means definition in medium shots fades into obscurity, and close-ups lack the consistency of the best digital productions. That’s not to say there’s nothing to gawk at, certain tightly framed shots appearing with rich facial texture, and some exteriors are superb.

Other typical digital anomalies make their presence felt too, including some limited banding, noise, and when the black levels are at their worst, visible vertical lines become far too apparent. Millennium Entertainment’s AVC encode is generous enough not to be adding to these problems, codec compression free and clear from this one.

For a movie featuring such light action (this one definitely more drama than anything else), the sound design doesn’t do much to make the action stand out. In fact, gunfire is so faded, routine, and dull, dialogue might have more impact. When Cuba Gooding Jr. goes on a rampage with a shotgun, those shots should be killing the subwoofer. Instead, this source material doesn’t even bother with the low-end.

The surrounds are much the same, under utilized to the point of being distracting. There’s a shoot-out inside a crowded club, patrons fleeing the scene screaming while shots are fired off. Suddenly, the surrounds don’t even exist, the design so dreadfully dull it’s hard to believe they were even mixed.

At the very least, this is a TrueHD mix that keeps fidelity firm in terms of dialogue, which is after all where it counts. There are small moments of success too, including a boomy title card, music in the same club mentioned above, and a brief car crash that show some signs of life before the whole thing flatlines again.

The only extra aside from a wide array of trailers is a making of that runs nearly 12-minutes, a nice piece with plenty of “fly on the wall” set footage.