Remember Frozone? If you’re an hour into The Incredibles, you probably don’t. He’s completely forgotten at that juncture of the film, Mr. Incredible and family investigating a secret island possibly run by a master criminal. If they don’t need poor Frozone then, it’s a mystery why he suddenly shows up at the end. Sort of takes everything out of the family, doesn’t it?

Then again, maybe it didn’t need to go there at all. Yes, The Incredibles is a loving homage to the ’50s and ’60s golden age of superhero comics, and with a jazzy score, clever oh-so-American lawsuit infested intro, and kinetic action, it’s fun. It’s a missed opportunity though.

Let’s face it: we’ve seen that all before. Unlike say Scream which was self-aware, always winking at the camera, Incredibles doesn’t do any of that. It’s a grandly animated superhero movie, and a fun one. Those opening sequences is where the charm comes in, Mr. Incredible (Craig T. Nelson) trying to adjust to the average, middle class worker’s life. He has a family, he can barely drive his car, and only wants to help those in need despite the wishes of his stuffy, corporate minded boss.

Of course, he still has super powers through all of this, and can’t stand the idea the government has imposed a ban on, uh, super hero “stuff.” That’s the movie right there, and midway through, all of that has vanished. There’s potential for better character depth, some nicely wound emotion, and plenty more that just gets dropped, much like Frozone (Samuel L. Jackson).

That’s not to say The Incredible’s is a terrible movie, or lacking in class, visual prowess, or anything else Pixar is capable of. For a younger target audience, it’s fantastic, while the older set is treated to a flurry of well-rounded references to an era that wholly embraced the fantastical adventures of these heroes without seeing them on the big screen. It has imagination, a spark of brilliance even, but if all you’re going to do with it is make a familiar (redundant even) superhero movie, why bother? 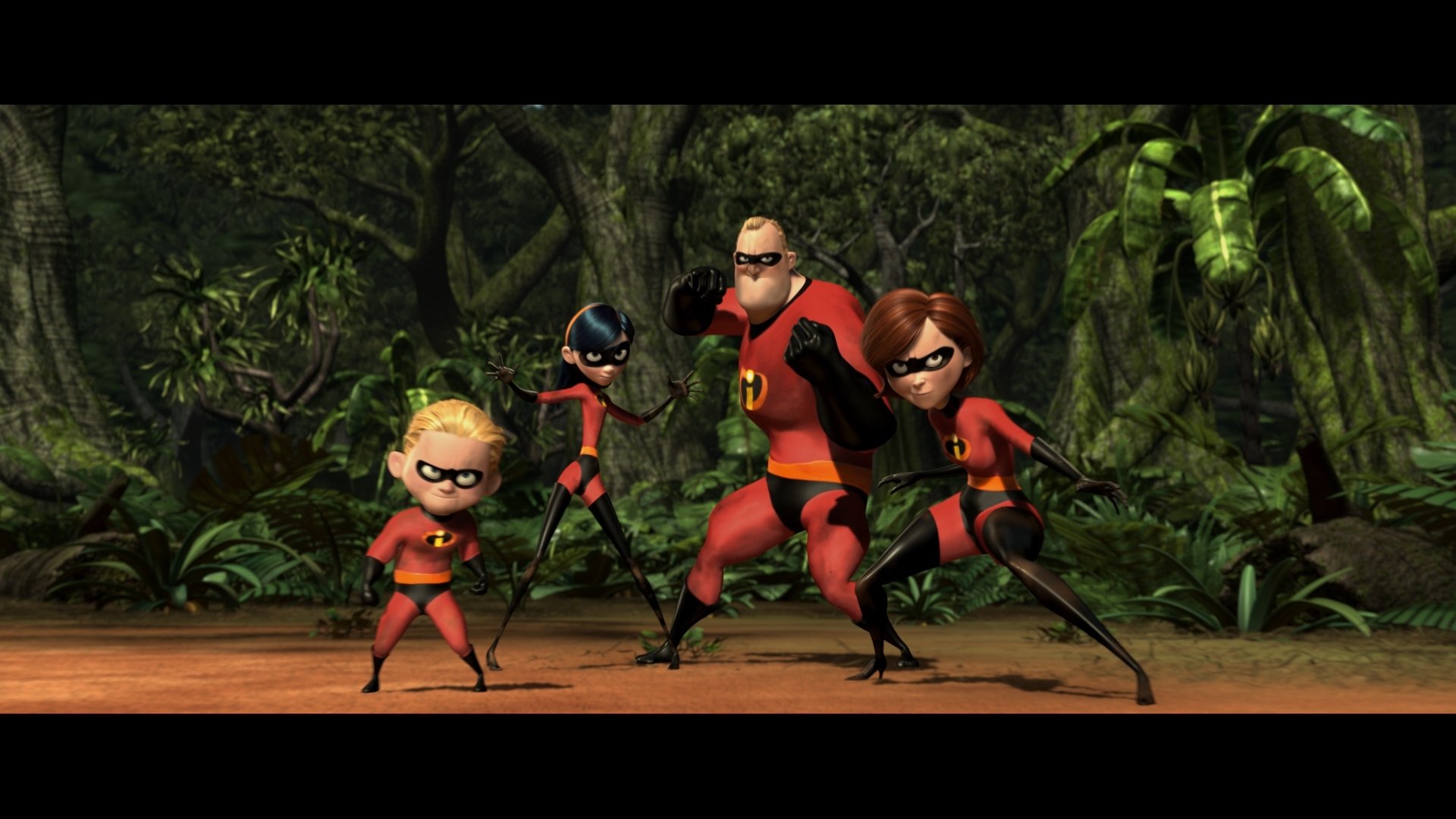 Yep, The Incredibles Blu-ray is just about perfect. Not sure what everyone was expecting from the Pixar/Disney duo, their quality control apparently coming from some other planet in a galaxy we haven’t discovered yet. They are mildly fallible of course, although only because the technology and resolution still isn’t quite there. Yes, the common aliasing trouble almost all computer animated features suffer from is here in limited form, fine lines on car doors or the vacuum cleaner show slight breaking-up.

It’s a problem so miniscule for this AVC encode, that is might as well be a waste of time to mention it. Do you even care? Probably not, but in the interest of being thorough, it’s laid out in text. The rest of the disc is a marvel, the film overlaid with brilliant, blistering color. From the island’s jungle greens to a reddish orange of the final suit designs, nothing is left unchecked. Prior to all of the adventuring, the depressed state of our heroes is presented in a constant state of stale desaturation, perfect for that bland corporate world. The contrast between the palettes has never been better.

The Incredibles came out in 2004, and upon looking back, that’s not easy to see in action. The movie is rife with fine detail, from the stitching of the suits, work shirts, and bed spreads to the massive layer of trees on the island paradise. Even some modern animation struggles to reach this level of visual acuity. Pixar even adds a light layer of skin texture on close-ups, effective and pleasing. Hair is stunning as well, every strand now visible individually.

Black levels are immense, a fairly sizable chunk of the movie taking place at night or in a cave. Shadow detail is preserved and easily appreciated. Sharpness doesn’t waver, and there is no loss of fidelity regardless of the background conditions. On another note, the film opens with virtual film, flashback interviews and the story up to the point where this one kicks off. It attempts to replicate the look of 16mm and 8mm, and while it’s not particularly successful (the fake grain looks, well, fake), it doesn’t present any encode problems either.

You don’t have to wait long for this DTS-HD ES track to get rockin’, the opening sequence (past the flashback) presenting a wild car chase and eventual criminal stoppage with a tree trunk. Gunfire pans around, cars split the stereos aggressively, and the score becomes a beautifully enveloping element from the get go.

Bass is never withheld, the multiple battles with increasingly dangerous robots generating a rumble as they stomp, roll, or kick. Explosions are tremendously satisfying, and the sound of a plane hull smashing into the water below might be the best low-end jolt of the whole movie. Rockets launch, heroes run through burning buildings, and engines pack a whallop, all of those instances backed by a marvelous, powerful bit of subwoofer support.

Range and fidelity are flawless, while the stereo channels treat positional audio as carefully as the surrounds do. The jungle chase has villain vehicles spreading the front soundstage, taking over each channel independently. Voice work at 50:41 resonates from the stereos and then into the surrounds for a brilliant, convincing echo. This track even excels in those quieter moments, providing plenty of ambiance to enjoy during downtime. Brilliant.

Extras are split across two discs, the first housing dueling commentaries, the first with director Brad Bird and producer John Walker. The second hosts a whopping 13 members from the animation team, obviously the more technical of the two. The typical Pixar short, Boundin’ is also given a commentary, and if you still didn’t have enough chit-chat, the “fill in the blanks from the main narrative” short Jack-Jack Attack is featured… with commentary, this time aided with visuals. The Incredibles Revisited is a roundtable discussion with some of the crew reuniting for this disc, telling stories from behind-the-scenes for 22-minutes.

Disc 2 continues the feature assault, beginning with Path to Pixar, a six-minute look at story artists. Studio Stories is a short piece on how birthdays were celebrated during development followed by a look at the end credits design (also short, about three minutes total for the two). The New Nomansian is a interactive gallery that details how the island was put to use after the movie ended. Seven deleted scenes include an extensive alternate opening, in total running 21:31. A wealth of DVD features are pulled over, 17 to be exact, ranging from making-ofs to the technical challenges. All of the 11 easter eggs are collected too, including the sock puppet recreation that was far too enjoyable to remain hidden. Trailers mark the end of this one.