Much like the prior film in this series, Dathly Hallows Part 1 isn’t complete. Character arcs are on their way to completion if not there yet, the overall narrative is still a step away, and we’re still waiting for things to take a turn southward for Potter, Weasley, and Granger.

Why is Deathly Hollows still satisfying then? Despite being naturally incomplete by design, Warner’s extravagant budgets and David Yates hauntingly dark photography still give this half-entry life. Danger is prevalent, the film opening with energy as Potter (Daniel Radcliffe) is chased through the world of Muggles by Death Eaters, an extravagant, lively and engaging bit of action that will remain the highlight of the film’s action-oriented tension.

There’s still plenty left to do, although the main characters spend most of the time on the run, this aside from a bold invasion into an overrun Ministry of Magic. They’re after pieces of the Horcux, the only thing that will eventually kill an ever-powerful Lord Voldermort (Ralph Fiennes). To make it that far, Harry must return to his home, visiting his parents grave site in a somber moment, and even breaks up with Ron ((Rupert Grint). Emotions run high through this piece, and romance blossoming.

Dumbledore’s death weighs heavily on the proceedings, the shock of it all running through the veins of this winding adventure. That’s a pivotal moment for this entire franchise, Potter under increasing pressure, protection, and danger. He feels vulnerable here, more so as other characters begin dropping as the story continues to stack the odds.

Part 1 ends like it should, and were this a four-hour epic, it’s easy to put up a title card saying, “Intermission.” Part 2 will be more aggressive, intense, and bold, that tone now established via the set-up here. The prior movie took care of the characters, this one ensures they’re ready for the slaughter. That’s exactly what it needed to do. 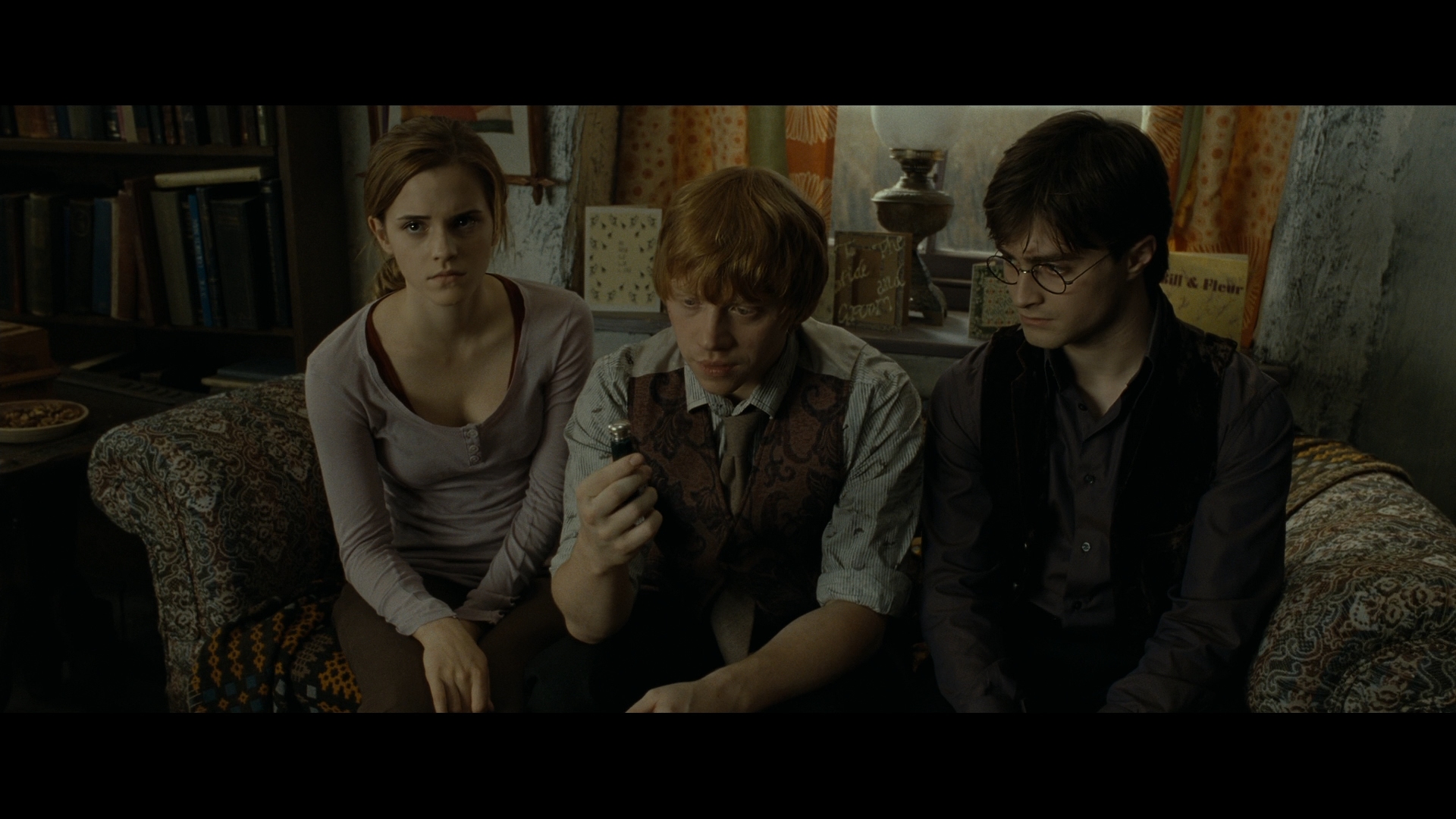 Warner’s filtered, processed and all around ugly Blu-ray transfer for Half-Blood Prince should leave some reservations here. In the time span from that encode, Warner has changed their tune, switching codecs and offering some added breathing room in terms of compression. That’s all made a world of difference, if not quite leading to perfection.

Of utmost importance here are the black levels, the film forever cloaked in dim lighting, sources typically a cold moon or lightly warming flame. They hold brilliantly, the image always full of depth and foreboding moods. Shadow detail is sublime, the video rendering fine object detail regardless of the limited light resources, and there are no scenes where the blacks fail to be reproduced to the fullest.

The transfer carries with it a natural film sharpness from the opening frames. High fidelity detail is pure, faces rife with texture and clarity. Clothing is defined and stitching visible, while the various landscapes are spectacular in their beauty. Fine grain sits over the image, for the most part resolved, natural, and transparent to the source. Color is well replicated at home, what limited selections there are showcasing some depth and boldness. From the killer blues of the night to the warmly tinted daytime interiors, Part 1 is effectively saturated as need be.

This is however a Warner transfer, and they still have a ways to go before reaching the lofty expectations of their competitors. Edges still feel harsh and a bit unnatural, light ringing evident amongst many high contrast edges. Grain can appear floaty and static, the worst of that coming as Ron battles the Holocrux around 1:41:00. Faces seem glazed over with an unnatural layer of grain there, special effects in the shot or not. Some shots come off as overly processed and a bit muddy, detail inconsistently displayed in medium shots. There’s also a moment of insufficient compression against a tall grass field at 2:12:27 that is simply a mess. These moments of lackluster encoding are few and far between this time however, and the end result is an overly pleasing, clean, and precise effort worthy enough for the material.

Warner’s DTS-HD mix is masterful from the opening logo, a creaking, rusting studio hallmark zooming towards the screen, the clarity and fidelity of it all on full display. It’s only the beginning of a rousing, aggressive track, the hefty opening action scene as Potter and crew take to the skies skillfully replicated to capture flying Death Eaters, smashing trailers, engine bursts, and spells casting. On top of it all, there’s a beefy thunderstorm rocking the low-end with each jolt of thunder.

Voices swirl around the soundfield as characters endure increasingly vicious dreams or visions, and crowded cities provide tremendous ambiance. Cars horns honk and pedestrians won’t shut up as they pass by, everything in balance with the main character dialogue. The overall effect is sensational and immersive.

It remains the action scenes that power their way into the living/theater room, strewn magic panning around through the stereos and surrounds. Every channel remains adequately engaged. The apparition that attacks Ron at 1:40:35 produces a booming voice and swirling images, each channel picking up the slack and keeping their elements pure. None of these sequences disappoint or lose any of the luster set by the one before it, and they’re spread out enough to keep them consistently popping up across the runtime.

Warner produces a Maximum Movie Mode pop-up feature for the first half of the final installment, hosted by Jason Isaacs. This track covers everything, extending the overall length by about 25-minutes. If you don’t want to watch the whole thing, you can pick up the focus points, six of them that total about 19-minutes. Obviously you’re missing out if you take that route.

A second disc is housed inside this case, this one kicking off with five featurettes for about a half-hour, focusing on specific scenes to special effects. A separate featurette focuses on the score. Eight deleted scenes will sap 11-minutes of your time, followed by an exclusive sneak peak at Part 2 of this chapter. A tour of the new Wizarding World of Harry Potter attraction is featured, J.K. Rowling and Daniel Radcliffe leading the way. Some general BD-Live functionality is available too.