Rule for a third slasher movie: Cameos are lame and desperate if the person isn’t being killed. Scream 3 has a lot of them. As such, yes, this one is quite lame and quite desperate.

This was not a smooth production, undergoing rewrites and ditching former series writer Kevin Williamson for newcomer Ehren Kruger. The styles are vastly different, Kruger gunning for the typical Hollywood summer movie approach (he’s also responsible for the Transformers sequels, and you can see it here), Williamson far more subtle. Maybe Scream 3 was meant to be broader, the law of diminishing returns meaning you need to widen the potential audience. What that does is grab the heart of this franchise, stab it, throw it to the ground, and step on it.

Scream 3 turned into a riff on all of Hollywood, not a simple genre. The second film, while still broadening the horizons, stuck to its guns. This trilogy maker just seems to throw its hands up as it seeks out any worthwhile ideas. About the only cool thing the third Scream brings to the table is the killer’s methods, picking up on a script for the upcoming in-movie Hollywood retelling Stab 3. That’s the way the victims are chosen, although this one is quite the cheater. He doesn’t have one voice but many, breaking a tradition.

Maybe the series died with Randy (Jamie Kennedy) in Scream 2, here forced into the movie in the clunkiest way possible. His never before seen or mentioned sister makes a single scene appearance to deliver the rules of the trilogy via Randy’s tape recording. The movie’s tone is already gone at that point, so maybe it doesn’t matter anyway. Kruger’s script is half-hearted and overly comedic, again that whole “lack of subtlety” coming back to clamp this one down.

Scream 3 still has energy, the chase sequences are fun, and the bumbling killer remains enjoyable. It’s not a total wash, and the Jenny McCarthy cameo is close to capturing what made the first two work. Oh, and for the record, making Scream 4 completely ruined the ending here which if nothing else, was a great send off. Thanks for nothing. 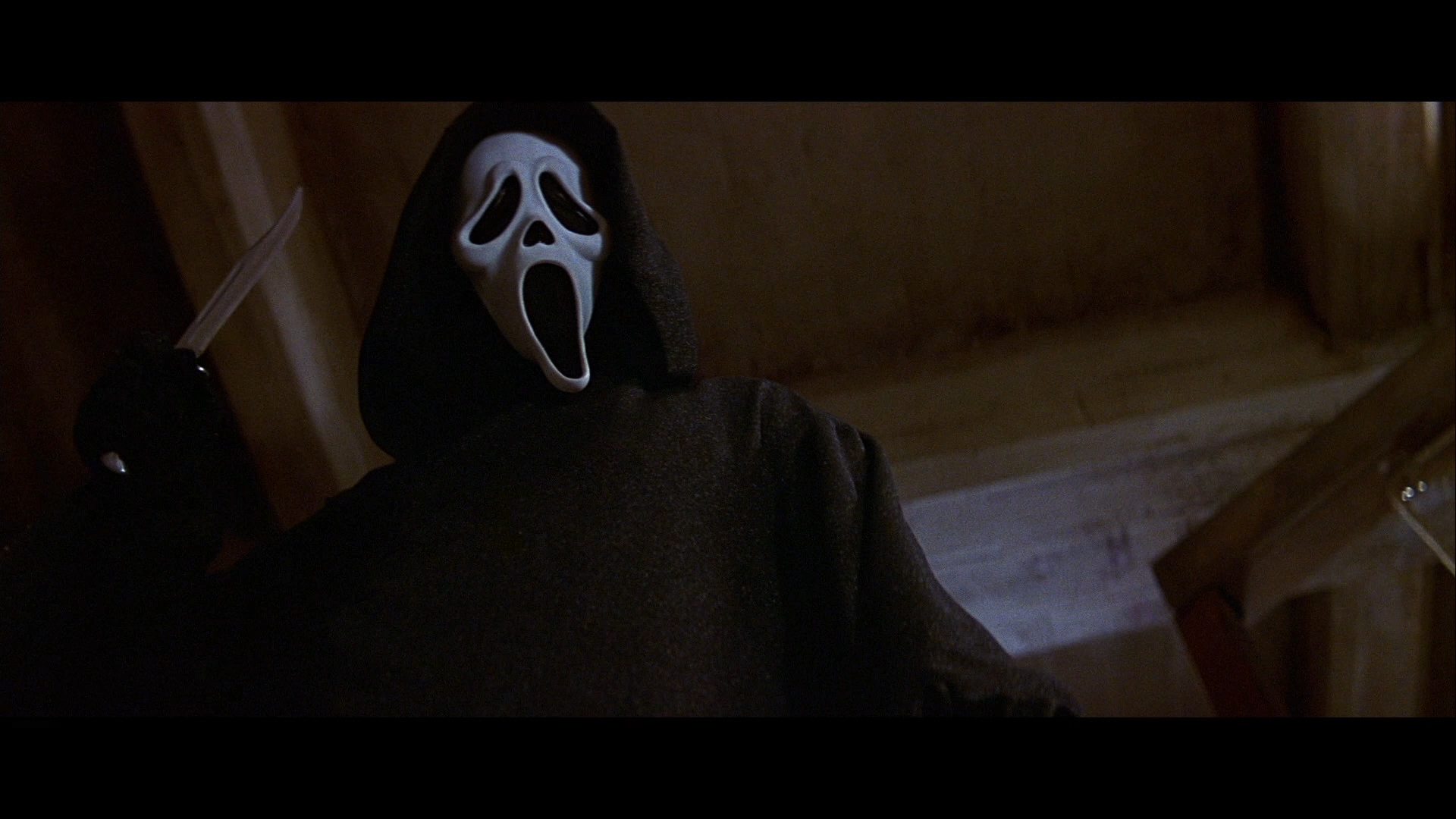 It’s funny that each each of these Blu-ray releases have a completely different grain structure from the others. The first film appeared mushy, the second overly compressed, and this one all-around unnaturally perky. There’s no cleanliness to Scream 3, this one not avoiding the troubles that plagued the predecessors, but the grain is unique. It swarms everything, bright white objects like paper, houses, cars, etc. look like they’re being assaulted by gnats.

It’s of course the sharpening yet again at work, leaving halos all over the place with no reservations as to where or when. Maybe the edge enhancement is the least intrusive here overall because the film is so dark, benefiting from the same black levels to hide obnoxious outlines. This is probably the darkest of the three movies currently available, so it’s a winner by default (and that’s still not saying much).

Colors remain overdone, Gale (Courtney Cox Arquette) first appearing in a red dress that sets the screen on fire, and not in a positive way. That thing is bleeding all over the place. Primaries are still a mess, and flesh tones pitiful. They range from ghastly to burnt sienna and with little to no correlation to the scene they’re in. This is yet another Scream transfer that looks like it was mastered back around the time it was released, not that the expectation was any different by this point.

The three originals are at least consistent when presenting facial detail, close-ups here remaining firm and a little harsh. Fine object detail at a distance is still a hi-def disaster, existing on some other planet from the close-ups. Facial definition should count for something, and if that has to be the minor positive we take away from these three releases, so be it.

Four years in technology is an eternity, and it certainly benefited Scream 3. The sound design is significantly wider and busier. There are numerous instances of positional voices panning around, Sidney (Neve Campbell) reminiscing about the first movie’s events at 1:03:40, swirling dialogue surrounding her and the viewer. The whole thing repeats itself a few minutes later.

The first explosion of the series happens here, a house going up in flames while the surrounds capture an effective, pleasing debris field. What’s missing is any satisfying bass, and that’s really the case with the entirety of this DTS-HD track. The low-end seems lost and forgotten, guns firing, people slammed into things, crashing through doors and more, none of it offering a substantial bump… or any bump at all.

Fidelity has certainly improved, the score offering better dynamics than any did previously. Music is richer, and in a little better balance so those numerous jump scares aren’t quite as forceful, but natural. Dialogue follows the same pattern.

Wes Craven returns for another commentary, the crew from the second following, producer Marianne Maddalena and editor Patrick Lussier. Some awful looking deleted scenes run 13-minutes, separated from an additional 10-minutes worth of an alternate ending. Both of those come with an optional commentary. Some amusing outtakes is followed by a behind-the-scenes montage that covers all three films in just six minutes. A music video and a stack of trailers are left.