There are only so many horror cliches to prey upon, so Scream 2 needs to broaden its horizon. The budding relationship between Dewey (David Arquette) and Gale (Courtney Cox) reaches a peak here, meeting in a school video room before going through the motions of the meet cute, even the head bump.

It’s a sure sign that Scream 2 is losing its grip, this sequel, necessary to keep the gag going, longer than the first without as much material. Everything feels a step below, from the slightly off-key writing gags to the reliance of general film anecdotes, the classroom banter over sequels in particular moving in a new direction.

Then again, maybe it’s a push to keep Scream 2 feeling fresh. Admirable for sure, but then why does it feel somewhat stale? All horror sequels are going to lose their luster, the killer(s) having already taken the key prey the first time out. Sequels need to introduce a new set of characters that exist purely to be killed, and possibly flesh out the old ones. Scream 2 handles that deftly, bringing forward the relationship, spooking out Sidney (Neve Campbell) as the man she put in prison is free, and everyone else… well, they’re simply back.

Source material is respected again, both in terms of prior slashers and the original Scream. Potential suspects are given plenty of motivation, misdirection returns en masse, and when the killer is revealed, well, it feels like a cheat. It’s another slasher reference, although one that takes more credibility with it than it was probably worth. Suddenly the kooky charm seems lost, half of that problem credited to the lackadaisical script, a quarter to that twist, and another quarter to languished pacing.

Scream 2’s intro is as good as it will get, a wonderfully brazen riff on the original film, set in a theater that would make you ask for your money back. Omar Epps and Jada Pinkett Smith rag on the stupidity of the first, which has now been turned into a feature called Stab, all the while committing familiar horror movie mistakes. There’s a sense this one could match up to the original, but it all goes out the window (literally, oddly enough) after a car crash as Sidney takes her own turn for the stupid. She may be a strong female lead, and we need more of them, yet we can’t forget they have to show a shred of intelligence when dealing with their stalkers. 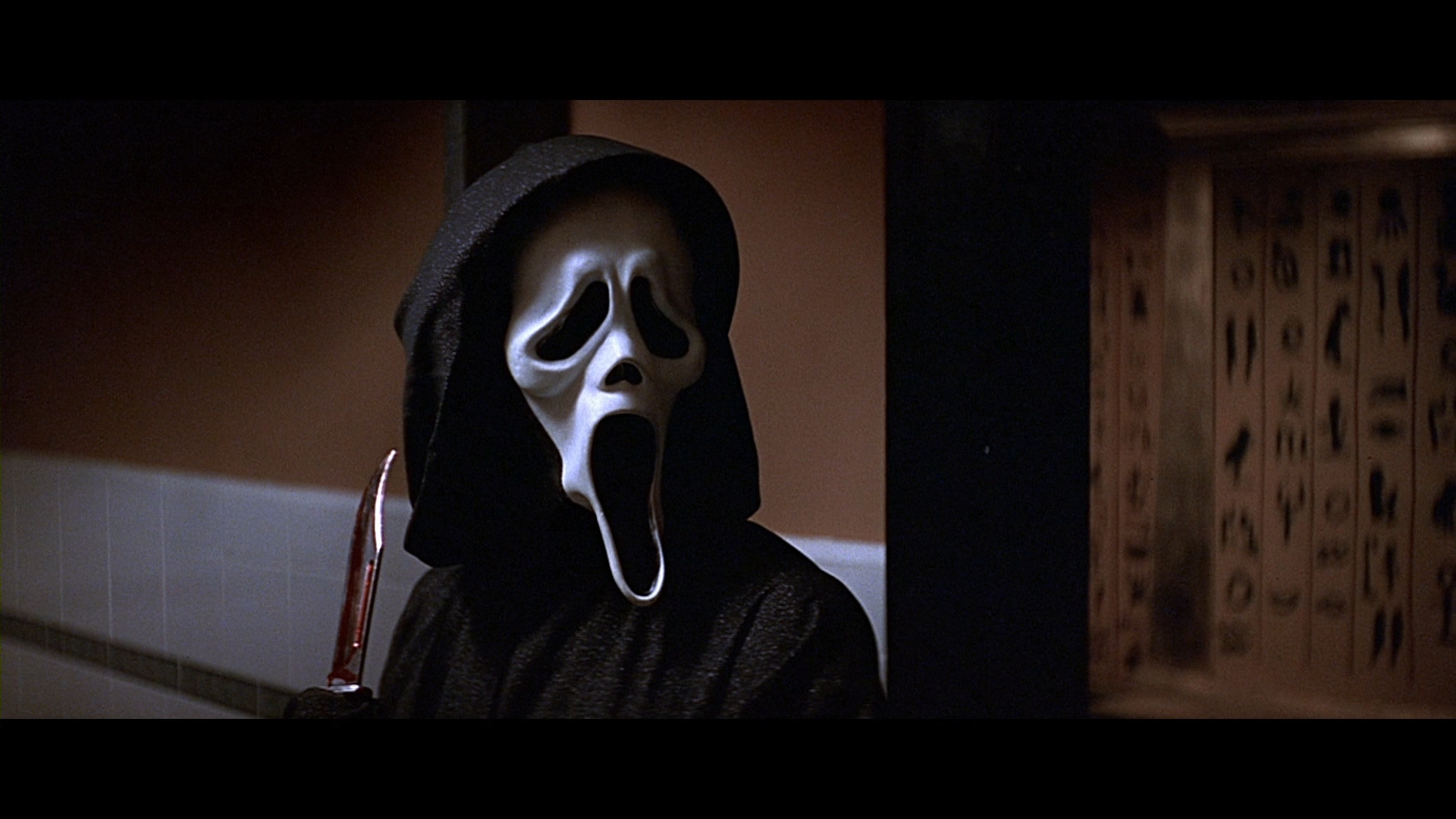 Well, here’s the good news about Lionsgate’s Scream 2 AVC encode: it looks different than the first. For instance, the grain isn’t as overly pronounced, a bit slicker and even resolved a little bit. Oh, and… well… there’s that one scene… actually, no. Forget it. It might even look worse overall.

There is something seriously wrong with the compression here (despite a decent bitrate), and it’s not as easy to trace back to the sharpening. Fine objects, from the glare coming off someone’s glasses, siding on a sorority house, trees, or equipment in the AV portion of the school, are rife with shimmering artifacts. Motion at times looks interlaced assuming the camera is situated with some distance between the focal point and the lens. Trees were just about a disaster in the first film’s encode, and here on this college campus, they’re twice as bad.

Plenty of sharpening is still present on nearly every frame. Facial detail on close-ups is still evident, harshly defined, but evident. That has to count for something. That’s the abusive sharpening at play for sure, and the glaring edge enhancement can be atrocious. Any high contrast edge gleams like some freshly washed glass in some dishwashing detergent commercial. Dark halos, light halos, they all come back for the sequel. How nice of them.

Color is gratuitously overdone, the grass on campus outrageously over saturated to the point where a team of radioactive clean-up specialists wouldn’t go near it. Flesh tones have a wavering mind of their own, deathly pale in one scene to a pronounced orange inside the police station. If they paid for those tans, everyone should be getting a refund.

Black levels are about equal to the first film, meaning they become fairly damaging to any shadow detail from time to time, although they give the image some depth. Print damage remains unacceptable for a film that can hardly be considered vintage, softness can play a regular role, and the whole thing reeks of pathetic quality control and ancient, lazy mastering.

Thankfully, the audio is a step up, the fidelity issues present the first time around left to the wayside for this sequel. No, this isn’t perfection, some lines giving off a tremendously obvious ADR effect, while the rest is fairly stable. As CiCi (Sarah Michelle Gellar) is stalked by Ghost Face, he tumbles over some stuff upstairs, the sounds planted firmly in the rears. Audio choreography is strong overall, stereos plotting the movement of cop cars, and the surrounds keeping busy with ambiance like birds or insects chirping.

The subwoofer is given some clean, tightly calibrated low-end work to play with, from the killer pounding on some glass at 1:22:53 to the score which when ramped up, gives off some solid range on both ends. The music wraps-around effectively, or at least as strongly as the theater crowd in the opening scene. They scream, yell, and holler with the best of them, this DTS-HD mix capturing the world’s most annoying theater to perfection.

Director Wes Craven comes back for the sequel’s commentary, this time bringing with him producer Marianne Maddalena and editor Patrick Lussier. Craven continues the chat over some deleted scenes, while nine minutes of outtakes stand on their own. A studio promo featurette isn’t going to deliver much detail about anything, some music videos are included for completeness sake, and there’s a small boatload of trailers.