With 16 extra minutes to play with in this Collector’s Edition Extended Cut, those new scenes breathe some additional life into James Cameron’s tale of interplanetary warfare. Avatar needed some richer characterization in its theatrical cut, and it finally has it, just at home.

Jake Sully (Sam Worthington) has some real weight as a hero, his backstory better fleshed out and his reasons for joining the Avatar program deeper. Grace (Sigourney Weaver) is also crucially fleshed out, a dramatic scene inside an abandoned school room loaded with bullet holes explaining not only Grace’s emotions towards the Na’vi, but the latter species’ reluctance to accept the humans. Now it’s more than just the living planet destroyed, but mistrust, multiple layers of anger, and a deeper personal connection.

It’s that rare director’s cut that doesn’t just add in some new visual effects (although it has those too including a stampede that foreshadows later events), but significant purpose and reason to sit through this again. At just shy of three hours, it’s crucial the material stand out amongst what most of the planet saw in theaters, and it’s time well spent.

It’s enough to raise the DoBlu rating a notch, really the sole complaint of Jake not being much of a hero now eliminated, and there’s nothing left to critique. The world is fuller, richer, and the reasons for it all stronger. For a full rundown, you can view the original theatrical Blu-ray review. 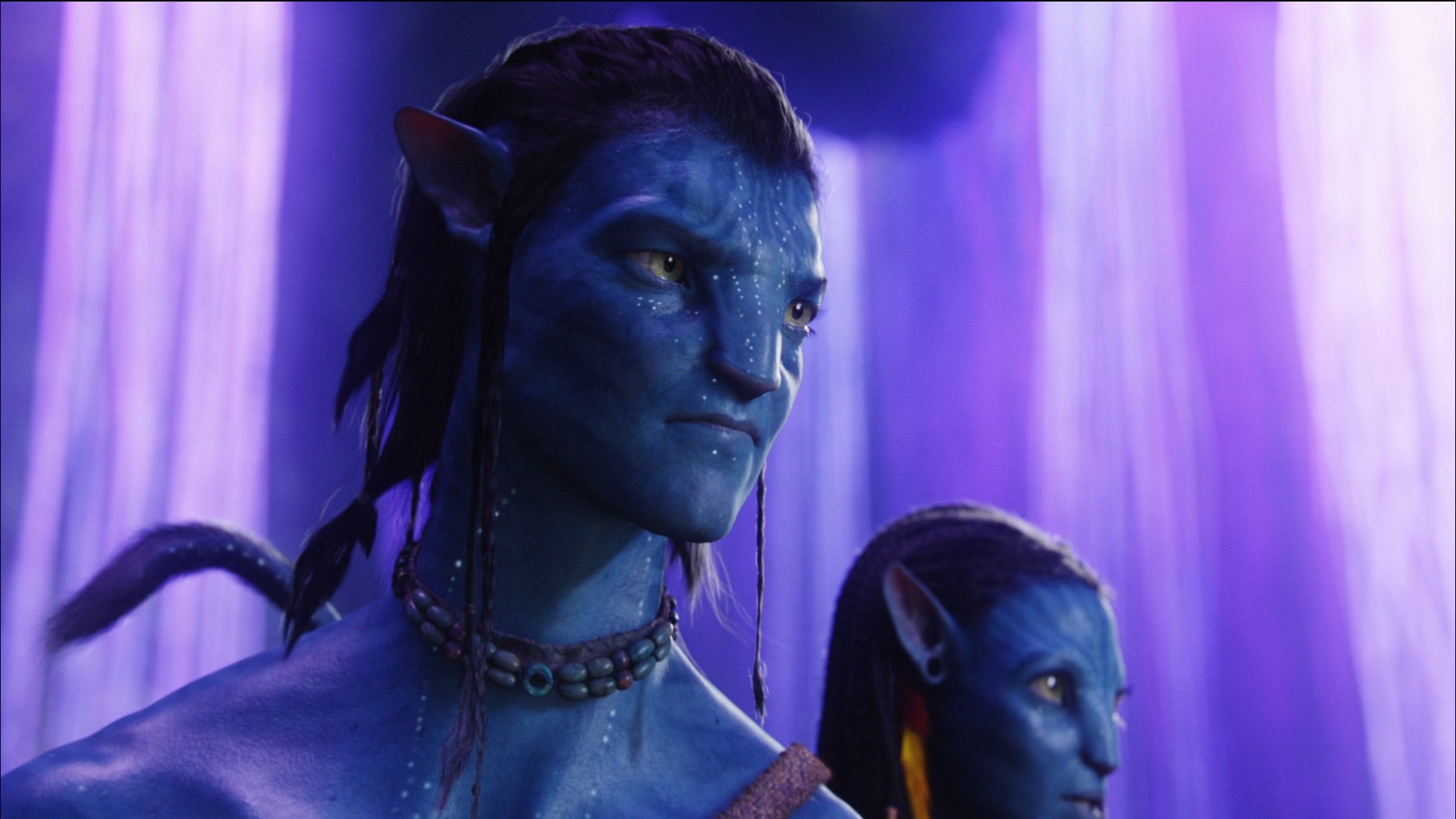 There’s a lot of content on the first disc (of a three-disc set), including the main audio track, three versions of the movie, and a secondary audio mix that pulls a Steven Spielberg and deletes all of the questionable language for family viewing. See, it’s okay to watch a bunch of guys take arrows to the chest, but naughty words? That’s a no-no.

Business decisions aside, Avatar is just as pristine here as it was originally. The computer generated Na’vi are an absolute marvel of visual effects, this AVC encode from Fox just as immersive and impressive as it was previous. From the light clothing worn by the natives, usually animal skins or beads that are meticulously resolved, to their visibly porous skin, nothing is lost. It’s hardly a shock to say Pandora is just as visually striking, the plethora of plant species on display, their individual leaves visible, are immense. Rock formations are just as outstanding, those complex flying sequences around the floating mountains unbelievable.

It’s also great to see a movie showing desperation in terms of survival so loaded with rich color. The familiar Na’vi blue is awe-inspiring and the almost neon-glow of the nighttime environments delivers a bright, rich glow. The skyline handles sunsets and the reflecting light of the surrounding planetary bodies with such grace, it’s truly a masterpiece.

Shot of course as a showcase for 3D, Avatar overloads the senses with its tremendous, reference level dimensionality. Black levels are jaw-dropping, keeping shadow detail pristine. Images backed by multiple colors, sometimes the ground and plants working in tandem, boost the contrast without losing the movie’s grandly scaled attention to detail. Even better, some of the very light, hardly noticeable noise issues from the original transfer seem to have been addressed here, and no visible artifacting has been introduced. That’s remarkable considering just how active this movie can be.

There is a caveat to all of this. Everything mentioned above refers to those visual effect scenes that make up the majority of the story. The PACE Fusion 3D simply does not impress when capturing live action. Even when the detail is there, and can it ever be right there, it’s still coarse and unrefined. At some distance, the image looks filtered and muddy. After two attempts, there is no doubt this is purely a source fault and nothing to do with the disc(s) itself. The sharpness and clarity of digital remain anyway, so it’s one for the videophiles to debate.

As the second round for this reference audio mix, there’s no doubt this one is better purely because there’s more of it to go around (that is assuming of course you’re watching the three-hour edition). The highlight of this fresh Blu-ray cut is the stampede, where loads of creatures trample the ground below them with tremendous force at 1:26:17, mind-blowing in its raw power. The surrounds take on a life of their own too, as if anything changed since the first time around.

Ambiance is pure in these new scenes too, the opening bar sequence on Earth carrying music in each channel. It blends right in, the spectacular ambiance of the hangar seemingly even better this time out, and the shaking instruments inside the trailer about 2:06:00 so immersive it’s ridiculous. This is a film that sets a goal, that of total immersion on this new world, and reaches it. Pandora is alive not just visually, but sonically too.

Not many people are putting this in to hear alien birds chirp though. They want to hear stuff blow up, and as if on cue at two hours in, things start to crumble as missiles blast into the tree. While the bass from each and every impact is filled with overwhelming power, the debris field as wood splinters is just as perfect. It’s a mix that surprises you, because no matter how many times you’d had simulated gunfire pass over your head, the effect in Avatar is so flawless it can easily make you duck.

There was some concern amongst the community in regards to the first release over the collapse of the tree, the bass not sufficient enough to convey such a mammoth object hitting the ground. That hasn’t changed. A text box pops up explaining the audio options when you’re in the menu, stating that if you have the equipment, this is exactly how it should sound. Why is there no bump when the tree hits? Who knows? Whatever the case, it’s a mild disappointment in a sea of overwhelming audible bliss.

As stated before, there are three discs here, the first housing so much movie content, it’s amazing they put anything on here… well, they didn’t really. The only real extra is the option to skip right to the new sequences without have to watch the entire movie, nothing that takes up space. The other selection is live extras, BD-Live access that takes you to some screen tests and look at WETA.

Disc two contains 28 deleted scenes in various stages of completion, totaling out to over an hour of added content. Capturing Avatar is the main making-of doc, 90-minutes worth of material that provides a great idea of what it took to bring this together. It’s enormously detailed, if not ranking up there with some of the best making-of docs out there. A Message from Pandora is a piece on the environment, 20-minutes worth. Production materials houses an additional 90-minutes worth of stuff, from special effects to storyboards.

The final piece of plastic begins with 17 scene deconstructions, each with three different levels of completion to watch. Featurettes are also split into 17 sections, ranging from pieces on designing the creatures and ships to the language, down to the cameras used to piece it all together. A selection titled Archives houses everything else, including trailers, scripts (yes, plural), and the “Pandorapedia,” which covers nearly everything about the virtual planet. The only thing missing from all of this is a commentary, but it would seem redundant given the wealth of information within.

Note: Time stamps for these screens will most assuredly be wrong due to Media Player Classic not handling the seamless branching well.