It must be nice to be Hayden Christensen. All he has to do in Takers is wear a goofy hat, try to act slick, and punch out a few one-liners. In fact, that’s all most of these characters have to do, the thinly scripted, high class bank robbers given minimal backstory.

Takers never really comes together because of that, muddled through a dreadfully dull second act where some grand plan to rob armored trucks is set up… slowly. Some of these crooks have personal problems, others just seem to disappear and reappear as needed. Chasing this group down are two cops, Jack (Matt Dillon) and Eddie (Jay Hernandez).

Takers does a lot wrong, and it’s not long before it’s hitting you over the head with idiotic cliches. The introduction includes that familiar shot of the explosion in the background while our criminal masterminds walk in front, paying no attention. See, experienced criminals blow up helicopters all the time and don’t worry about debris fields.

There’s an embarrassing fight inside a trailer over the acquisition of C4, shot so jumpy and edited so poorly, the whole thing looks like a test screening for a soap opera. Then there’s a big heist itself, set-up by Ghost (T.I.) who distracts the drivers with a traffic cop routine, running his mouth off the entire time. Apparently, being inconspicuous in the midst of a multi-tiered shoot-out never crossed his mind.

Giving credit where it’s due, Takers does find its energy not longer after, a wonderful chase sequence through the city streets that doesn’t seem to want to end bringing the film up from the lows it had sunk to. This leads into a final hotel shoot-out, loaded with plenty slow motion camera work that actually makes the whole thing visible in full. It’s all too late by then, the investment in the characters null and the end result wildly predictable. 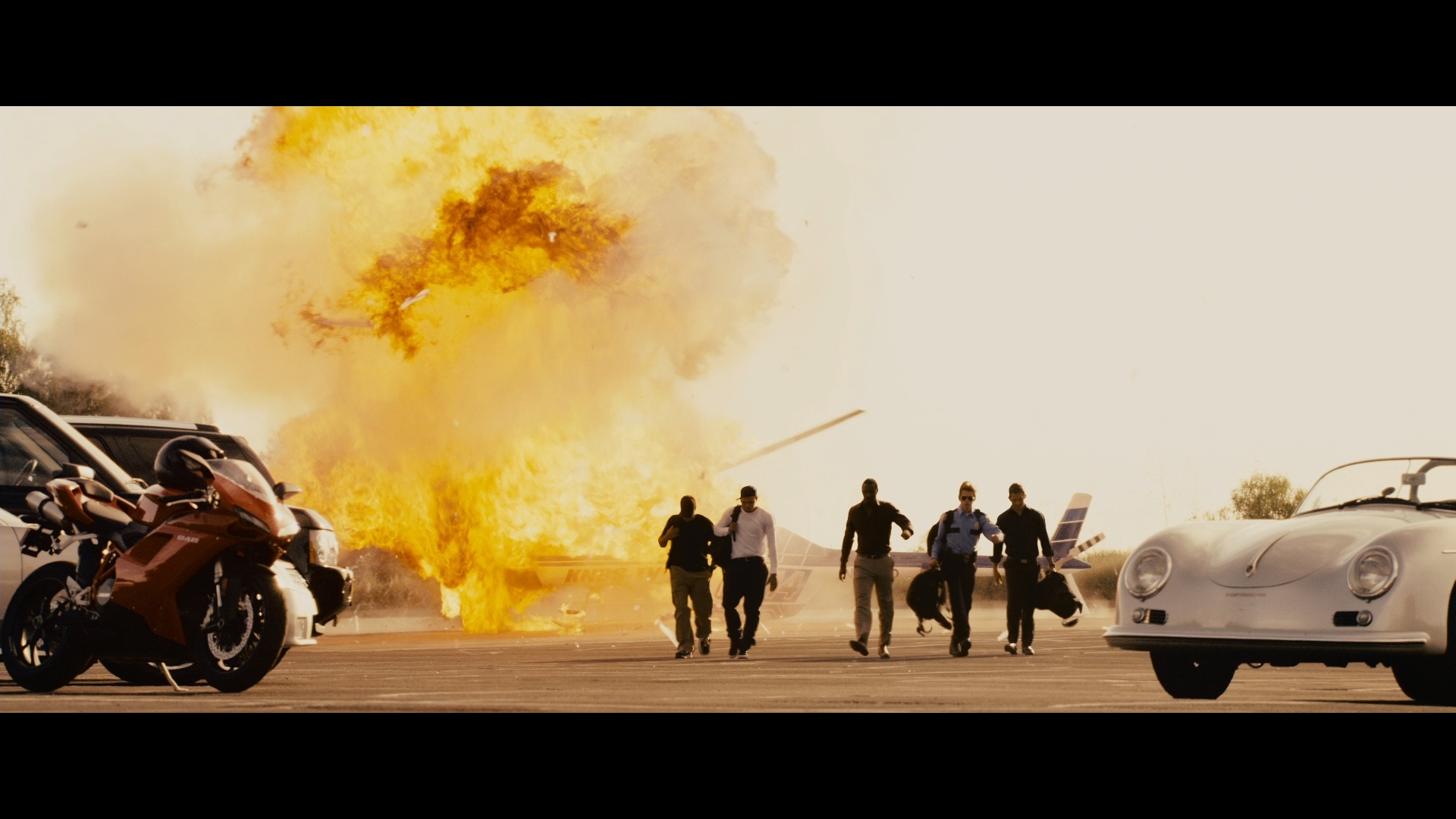 Director John Luessenhop chooses digital for this one, his camera of choice the Panavision Genesis. Immediately apparent are the striking black levels, producing an image of outstanding dimensionality. Shadow detail is well preserved, and the depth never lets go even in situations where digital would normally falter. It does introduce some noise, readily visible in the opening interior car shots, but kept at bay for the rest of the movie.

Colors, when natural, are fine. There are a number of exterior scenes where the natural hues are allowed to breathe. Clothing is bright, plants are lush, and sunsets are vivid. Somewhere in the digital intermediate this thing got ugly, hilariously color corrected to the point where characters look more like Smurfs than humans. The cold blues are of course dominated by an orange tint, because those are the only two choices that seem to exist anymore. The whole scene inside the bar around 23-minutes in is simply atrocious and hideous. Director’s choice or not, this is one of those situations where it’s detrimental to the experience.

Beyond that baffling choice of palette, Takers’ AVC encode from Sony is perfect. No anomalies (aside from the noise) are present, the image maintaining not just clarity but precision definition. Facial detail is easy to pick out when the camera stops waving around, excellent both in-close and at distance. The mid-range is actually outstanding, the rare disc that keeps things in focus at all times.

While not always consistent (there’s enough here to know that it’s digital beyond the lack of grain), Takers makes up for it with a dazzling array of city aerials. The helicopter escape from the opening moments showcases how substantially detailed those will be. Sharpness is superior to almost everything out there in these views, and there’s not a hint of aliasing to go around.

While peppered with some impressive action, Takers has a scene that already enters some contention for 2011’s best. The final hotel shoot-out, completely removing the mids and highs (except for dialogue) is a small miracle for those who can’t get enough bass. It’s all that exists for at least four minutes, every single gunshot reverberating in the subwoofer with enormous power beginning with the shotgun blast at 1:26:10. This is a blistering piece of audio design, and while it may not be realistic, it suits the moment far more than trying to turn these heist members into Avatars.

Prior, you have the usual suspects of modern audio design. Gunfire captures glass shattering in all channels during the chase sequence, the stereos as much a part of the design as the rears. The truck heist features two of the armored vehicles crashing down below the street surface delivering a jolt of bass only bested later. This occurs while tons of crisp gunfire swirls around in all directions.

Takers’ DTS-HD mix even starts off strong, a bit of gunfire followed by clean pans as the news chopper passes through the camera field. Dialogue is well balanced, brought to life with a bit of interior and exterior ambiance, light enough that it doesn’t intrude.

A commentary brings director John Luessenhop together with producers William Packer & Jason Geter and actor T.I. Executing the Heist is a dim, studio generic making-of piece. Take Action is pretty blatantly about the action, more promo than anything. A music video, trailers, MovieIQ, and BD-Live access are included too.