After a fairly routine car chase in which our lead Carl Lucas (Luke Gross) escapes from the cops, an edit takes us to a shot of the aftermath, cop cars flipped upside down. Look to the left though: there’s the sound guy, camera track, and someone running out with a fire extinguisher to help the stuntman. Why would that edit even stay in? You can’t miss such a mass of people standing on the side of the road, especially when the guy holding the boom mic is almost dead center in the street.

What’s one lapse of judgment though, right? Death Race 2 doesn’t just have one, and we’ll let the jumbled mess of the race itself pass because of the chaos. The first 50-minutes of this dull clunker is all about hand-to-hand combat you see, not because it’s telling some rich backstory on the death race (this is a prequel despite the title), but because human brawling is a whole lot cheaper than dressing up some cars and taking them to the track.

Even here though the continuity errors are unbelievable. One of the inmates, 14K (Robin Shou), is slashed on the back by his opponent, blood seeping out his wound. With one edit, that blood is gone, his shirt returned to a pristine white as he crawls up onto a bus in the middle of the arena.

When we’ve reached the races, or finally reached the races, we know what Death Race 2 will provide. There’s some pointless nudity in the beginning, Danny Trejo’s character has no point, Ving Rhames couldn’t be more miscast, and it has no trouble showcasing throes of violent content. The latter works out pretty well, a couple of splatter kills about the only thing that sets the proper satirical tone of the Roger Corman original and 2008 remake. Death Race 2 isn’t even close to smart enough to try anything of the sort.

Mixed into this garbled mess is a subplot about a bounty on Lucas’ head from his old boss, relatively meaningless since everyone is out to kill him anyway on the track. In the world of Death Race, everything happens in slow motion too, so catching Lucas shouldn’t be that difficult. Every explosion, wreck, and fight has some slowdown, as if the limited runtime isn’t enough torture.

Some credit is due to director Roel Reine, the final race sequences filmed with some care even if they are unable to match the scale of the first. Editing issues are abound here too though, as with only three cars left, a quick edit to a view in front of the oncoming traffic reveals… five. No doubt this was pressed for time to shove a sequel out the door resulting in these blatant errors. It’s about on the same level as the disclaimer that pops up before the unrated version stating that it has been modified to include new content not present in the original release. Isn’t this the original release? 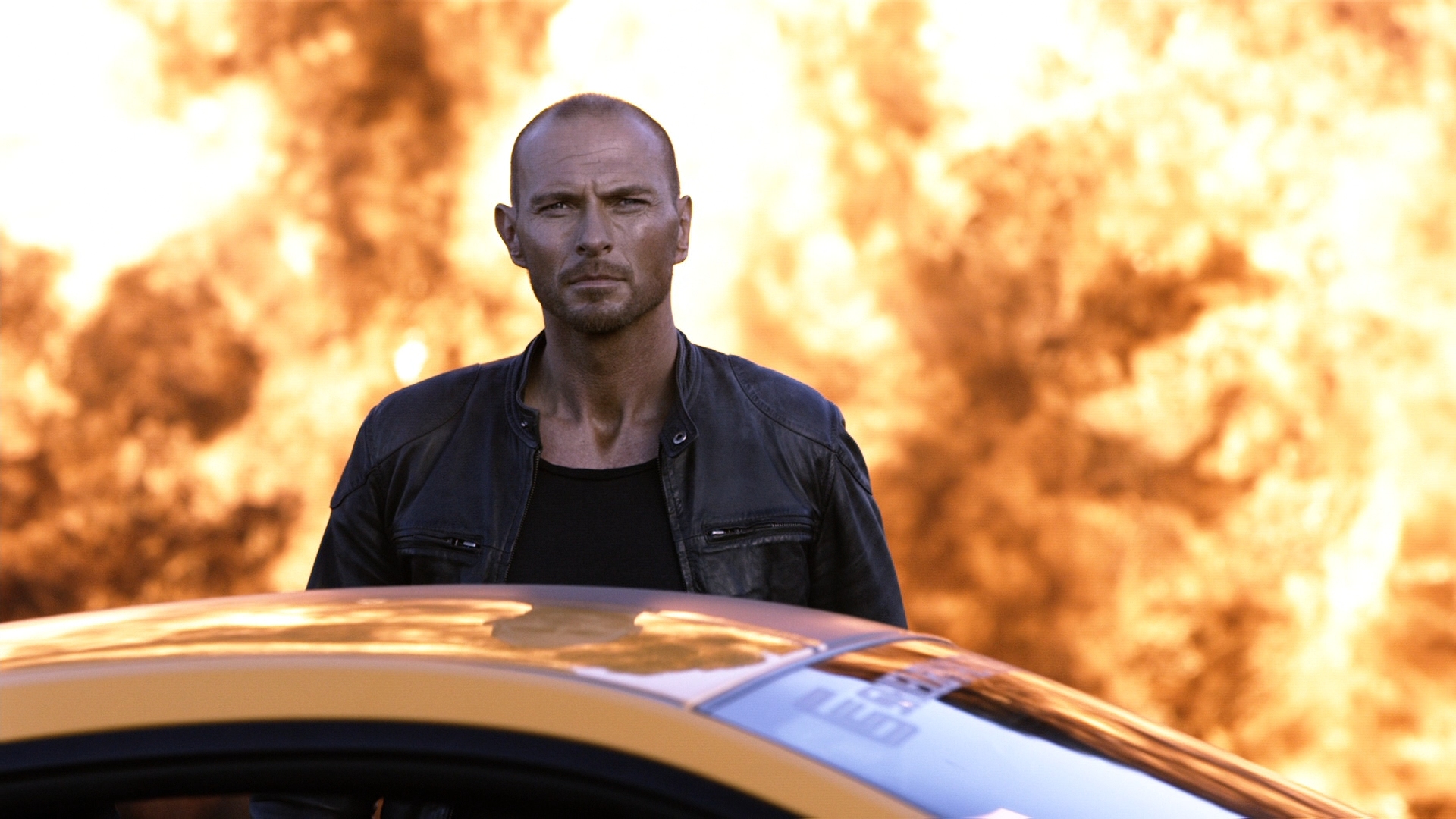 To keep things cheap, cheap, cheap, Death Race 2 was shot digitally, although to no ill-effect for this presentation. The heavily muted color palette means flesh tones are impossibly pale, primaries desaturated to the point where they would be lost, and the light earth tones are not aiming to please. Even the over-the-top blood is lackluster and flat.

That’s the design though, coming close to matching the 2008 remake this sets up. This one does excel quite often, facial detail truly outstanding in a number of instances. The benefits of digital are not lost, the clarity superlative. Sharpness, while taking a few dives in a couple of sequences, typically is substantial enough to preserve that richly textured layer of facial, clothing, and car detail. More dazzling are the brief views of the prison exterior, every brick, speck of concrete, and fence rendered without fault.

Noise is standard issue for a feature like this, causing some slight disruptions by the pool at Markus’ (Sean Bean) home. Oddly, most of the barely lit prison interiors are free of this issue. Black levels, while not super-rich in their depth, are satisfactory enough to get a pass. At the very least, they are consistent.

There’s one other issue of note, and that’s an odd flicker to a few of the darker scenes. The first is at 18:04, the screen awash with this sort of active banding effect vertically across the image. It’s as if the shutter is rapidly closing and opening, but without any image loss. It happens in three shots during the film, each time impossible to miss.

Universal delivers in terms of audio, a DTS-HD effort that adores the low-end. Every explosion creates a genuine rattle in the room, sufficient enough to satisfy any bass hound. If the overdone slow motion effects aid anything, it’s bringing those flames to life for a little bit longer than they would have. It doesn’t even have to be an explosion though, the flamethrower fight at 40:50 taking care of any lulls.

Once the cars finally start appearing in the races, the surrounds are brought in with a frenzy. They were a presence before too, the loud prison crowd expressing their joy in all of the brutality. When the driving begins though, it’s on a whole new level. Cars zip through the soundfield front to back, the presence of the stereos equally strong. The split is wide too, vehicles fading behind the viewer as they pass virtually overhead.

The generic soundtrack bursts just as freely around the speakers, aggressive and pleasing. In-between it all is some well balanced dialogue, free of any abnormalities or volume issues.

Director Roel Reine delivers a solo commentary, and introduces a six-minute section on deleted shots (not scenes, shots; unique stuff). Deleted scenes are up next, running near the same length, minus intros. The Race Begins is a short making-of feature, barely breaking six and a half minutes. Cheating Death details the impressive stunt work, while Fast Cars and Firearms is all about the vehicles. D-Box and BD-Live support are left.