The Flower Duet by Leo Delibes has never been so beautiful. In fact, it might be the most beautiful thing ever written, or maybe it’s just because Kelly Brook and Riley Steele just got done swimming to it nude under the water. Could go either way.

Regardless of what makes that bit of music great, it’s not hard to figure out what makes this “remake in name only” a new icon of the creature feature genre. It’s a mess… of blood, strewn body parts, gushing wounds, boobs, and Jerry O’Connell’s digital penis. You can’t make this stuff up.

Piranha has no boundaries. None. That’s why it works. In a really stupid way, it may be the smartest movie ever, just letting it all out on screen. It lets Christopher Lloyd ham it up as a pet shop owner, Ving Rhames do what Ving Rhames does, and create some of the best on-screen kills ever (stuff the Saw series would dream about).

This thing moves blazingly fast, a quick nod to Jaws before the opening credits and then we go full bore into the sun and babes of spring break. It’s sexist, sure, and like everything else, Piranha is not out to make apologies for what it is. This one just revels in all of its gory glory, and when the chance comes, blatantly overuses the 3D because no would care if they did anyway.

From the tongue-in-cheek visual effects that literally have the critters peer into the camera to the nudity that gives the R-rating a new meaning, this is just a fun movie. What else could you expect about a flick dealing with ravenous prehistoric piranha that just happen to assault teens and underage drinkers during the busiest tourist season ever? It’s a creature feature that fully understands what it is, not trying to find an identity in the ’50s sci-fi cycle or become a serious knock on Jaws. Piranha’s goal is to overload every parental viewing guide on the planet, and it does it with a smile… and blood… and boobs… and computer generated floating penises that are later burped up by a piranha. 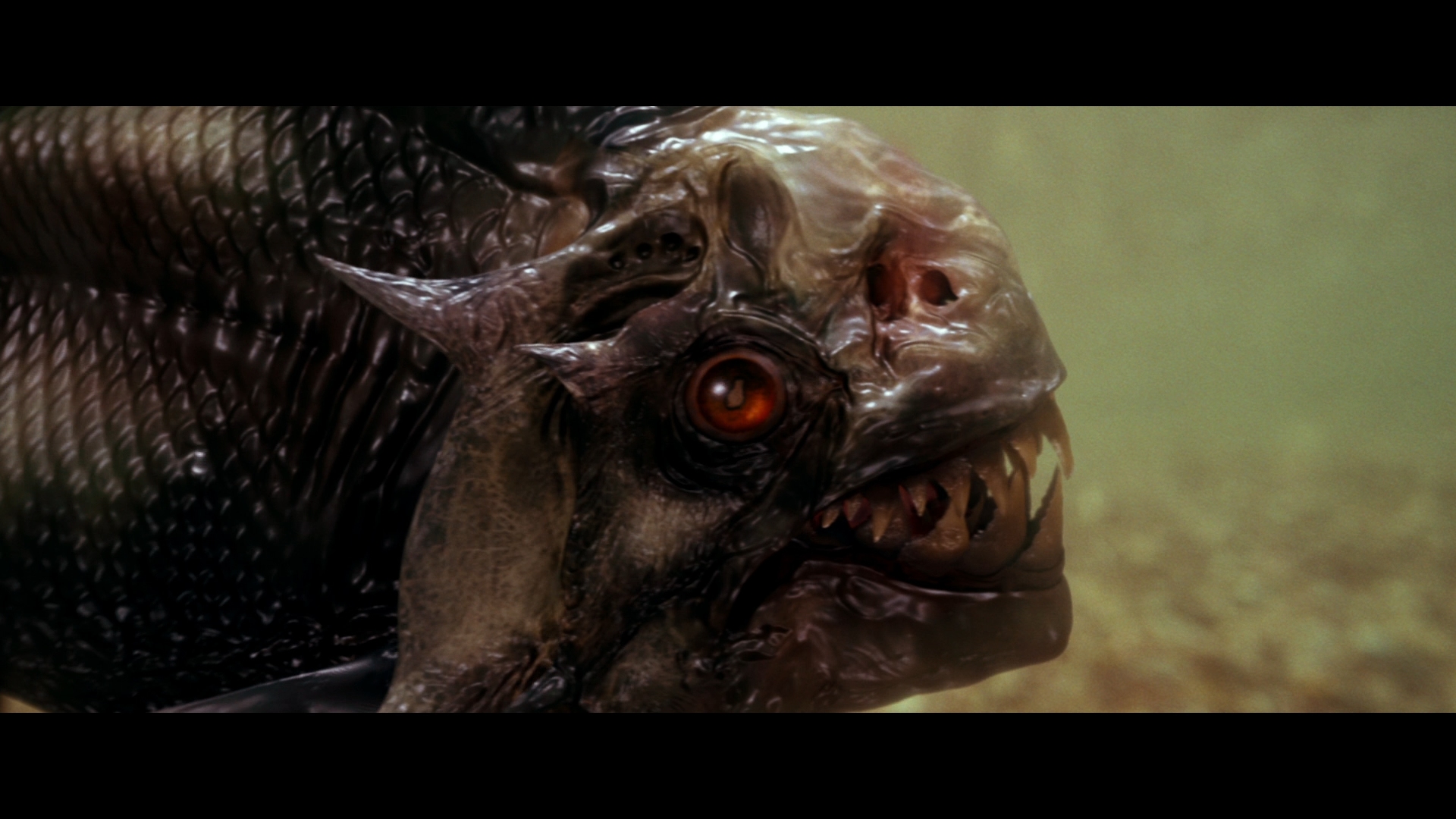 Because it was post-converted into 3D, Piranha was actually shot on film. The result is nothing less than eye candy, and those concerned about grain have zero to worry about. The effect here is that grain is so finely rendered, you’ll never see it short of those underwater sequences, oddly the same time the banding creeps it. The latter is especially rough during a cave exploration about 35:00, the focused light sources not kind to this AVC encode.

Beyond that, this is basically perfect. Colors are unbelievably saturated, intense and bright. Flesh tones don’t suffer as much as you would expect, the somewhat orange-ish tan effect making some sense in this sun-drenched environment. Nothing can be stated as natural per se, even the mass of blood that fills the lake completely exaggerated. There’s little doubt that this looks awesome though, the swarm of ridiculous primaries and bright bikinis about the limit of what this format could handle without bleeding. Even the water is absurdly blue.

Texture is rich and full, close-ups resolving a wide range of skin detail, and this one has a lot of skin. As Kelly (Jessica Szohr) starts doing shots off another girl’s stomach, every tiny hair and pore become visible as the camera pans in. Facial definition is superlative, the generally active, bouncy camerawork not leading to any smearing or other fault. This is all consistent, with no scenes that distract besides some shots that involve effects work. Action is so lively it sprays water and blood mixed in with those poor spring breakers, and no matter how intense, there are no signs of artifacting.

Contrast runs hot by design, suiting the exaggerated look and never taking any detail with it anyway. The black levels reciprocate, under or above the water, losing no shadow detail while providing the utmost dimensionality. These are striking images, so sharp and clear, it only serves to make those wonderfully cheesy visual effects of the fish stand out further.

Piranha opens on an earthquake that takes hold of the subwoofer and basically serves as a guide for what you’re about to experience. Any time the camera dives or edits into an underwater shot, the low-end sucks the air out of the room to provide that eerie jolt that more or less serves as notice that fun is on the way. Never fear though since that’s not all. The deep, powerful dance soundtrack is still there to overload things, and the shotgun blasts fired off by Ving Rhames at 1:06:37 are as spectacular as they come.

Think there’s no surround work? Ha! Any movie with this many stupid 3D effects gets plenty. Anything that is passing through the field of vision travels appropriately, from a thrown cup early on to the swarms of piranha seeking a meal. Oh, and when they find it, it’s an audio assault too, the sounds of flesh being ripped apart captured in all its glory. Countless screams are scattered around

The music serves a secondary purpose, to swell up and hit not only the stereos with a wide split, but the rears too. There’s quite a bit of ambiance elsewhere, from waves crashing up onto the shore to the party always being a presence. Through it all, the dialogue remains tight, never overwhelmed or understated. Great stuff.

A commentary comes to us from director/producer Alexandre Aja, and additional producers Gregory Levasseur & Alix Taylor. Six deleted scenes continue the commentary optionally, while some additional deleted scenes only made it to storyboards. The real highlight here are 10 featurettes, coming in with a combined total of over two hours, 40-minutes longer than the movie itself. It’s all here, and the stuff on the gore effects is great. Trailers and BD-Live sections are left.