The problem with making a sequel to 2005’s Nanny McPhee is expanding what is a simple, storybook tale, and without remaking the same material. Nanny McPhee Returns tries. There’s a new setting, now sometime in the ’40s during WWII. A single father is replaced by a single mother. A couple of animals are replaced by numerous ones.

At its heart, it is all the same, McPhee (Emma Thompson) still endearing as a magical nanny who steps in to help the overburdened parent instill five rules onto the children. At least, that’s the overall goal. In-between it all is some family drama, the father off fighting in the war creating added tension. The unscrupulous uncle tries desperately to sell the family farm to pay off gambling debts, putting added pressure on the mother tied up in all of this, Isabel (Maggie Gyllenhaal).

It leads to various antics, many of the them wildly necessary. The first film had an out of place smiling donkey, while the sequel ups the ante with a full-blown synchronized swimming sequence involving piglets. It’s there for some action, something lively to keep the kids entertained since even the little ones will realize the core material is awfully familiar.

There’s another scene where McPhee takes two of the children into London, spreading magic around town to make statues comes to life and fly on her motorcycle. The stylings are unique at the least, with exaggerated buildings and fine stand-off between father and son shot mostly at a low angle to accentuate the tension in their middling relationship.

Returns’ story is broader than the original, taking a sequel where it should go, building on the foundation and expanding it. The set design is even better, especially the general store where Isabel works, loaded with knickknacks and color. The kid’s bedroom is lavish and overloaded with random stuff that gives it character. As mentioned, the story has multiple locations, from the muddy farm to the gloomy city, each with distinct looks and style. It’s all appropriate for the age group this is aimed at, but doesn’t carry over the immense delicate charm of the first film. The extended effects seem needless, and no matter how great the kids are, their talents can’t save the average material given to them. 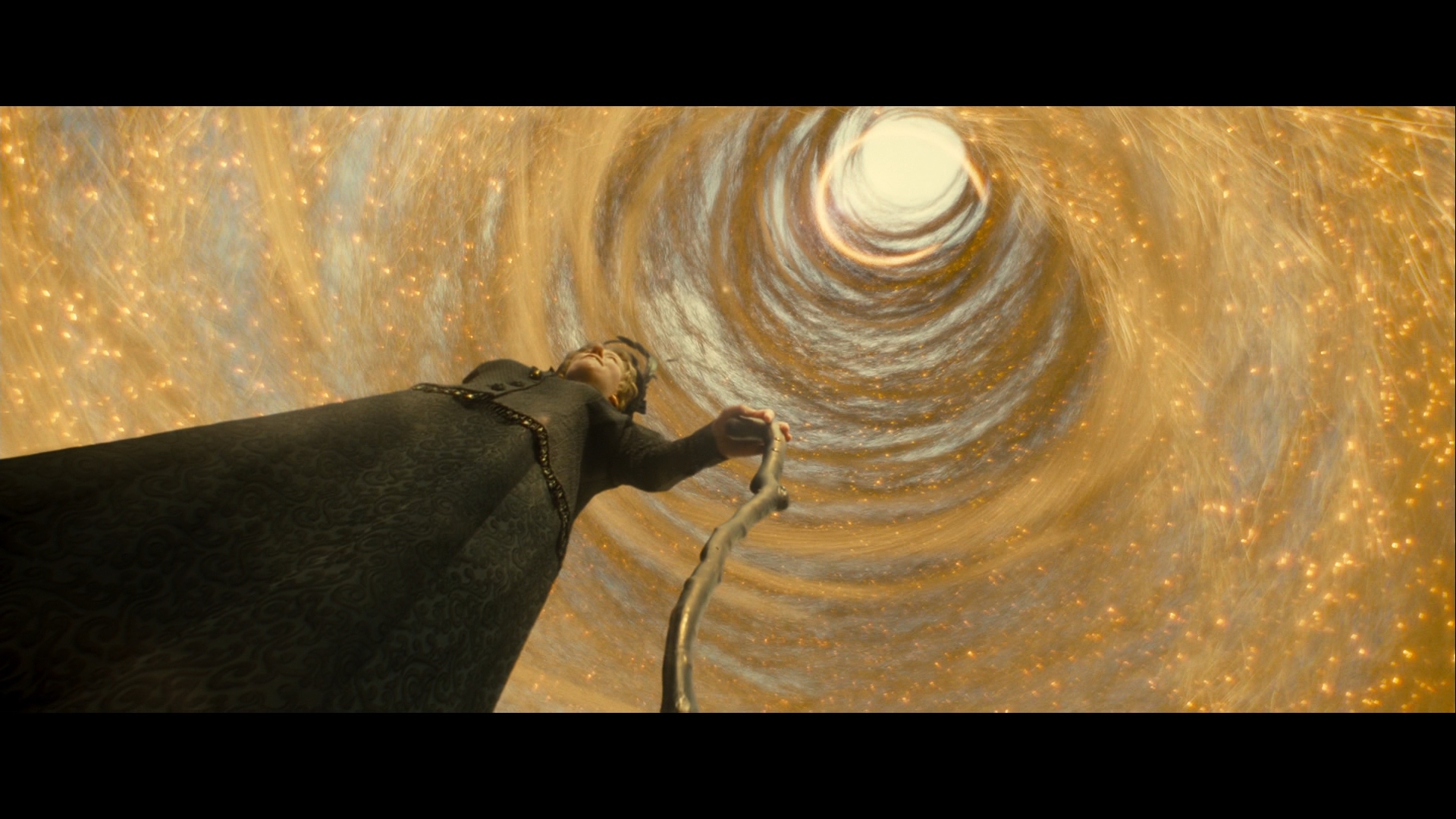 Nanny McPhee Returns is given the VC-1 treatment on Blu-ray, sufficient enough to handles this bright, colorful material. Everything is exaggerated, the world carefully constructed to maximize the primaries, then saturated in the digital intermediate. The end result is an eye-popping experience in terms of its color, every hue rich, bold, and a joy to look at. Even basic objects, like the pale wheat fields, are given life they wouldn’t have in reality, a golden yellow that is far more pronounced than it should be.

Black levels, aside from a minute number of scenes that don’t quite gel with the rest, are satisfying. The movie generally takes place during the day, giving the images a resounding level of depth. Contrast is better controlled here than it was in the first movie, on a consistent level without running hot.

Interesting is the London sequence, obviously digitally constructed leading to a rather flat, smooth look that clashes with the typically film-like scenes elsewhere. There is little grain present anyway, but this whole sequence, aside from the close-ups of Ralph Fiennes, are distinct in their variation. What grain is evident elsewhere is fairly well resolved, with a hint of a noisy quality evident in the backgrounds at times.

Next to the color, detail is a secondary strong point, from the gooey (and other… stuff) covering the ground of the land to the strewn objects around the house. High-fidelity facial detail is adequate if all over the place in terms of consistency. Even if it’s not evident, the definition overall is excellent, a hair softer than the original maybe, but nothing that detracts from the general quality on display here.

The sequel was originally titled The Big Bang, yet that title still has merit for this DTS-HD effort. Each time McPhee slams her cane down to begin her magic, a tremendous jolt is generated in the sub. However, none are more staggering than the finale, where the bass is awe-inspiring. At 1:31:00, her powers set off a chain reaction of increasing audio bliss, beginning with that air-sucking shot of bass that rumbles, rattles, and runs through the room. Clarity is spectacular, and the shaking enough to takes some stuff off the walls at the right volume.

Following her strike is some wind, where objects are picked up and strewn about the soundfield with grace and flair. There’s a tornado (of sorts) kicked up, the intense breeze swirling about through each channel of this 5.1 mix, enveloping the viewer as well as the characters.

Even prior there’s some surround use to take note of, McPhee’s appearance greeted by some voices popping up within the general store with familiar chant of, “What you need is Nanny McPhee.” The placement is precise and specific, hitting each channel distinctively. Everything is up to modern standards in terms of fidelity and clarity, no faults to take note of.

A commentary comes from director Susanna White, followed up by a dozen deleted scenes totaling around 15-minutes of screen time. Six featurettes cover the basics (also around 15-minutes) including make-up and working with the pigs. A Look Inside barely qualifies as anything other than a trailer that happens to feature interviews. BD-Live has two movies available to view, although you can only choose one, the choices being Curious George 2 and yet another Beethoven sequel. The disc is also D-Box enabled.