What Salt seems like is not what Salt is. What seems like a standard Hollywood thriller, the CIA agent inadvertently exposed as a mole who now must prove their innocence, is not that simple.

Salt twists and turns like few others, Angelina Jolie playing the title character Evelyn Salt who is the target of increasing CIA pressure to turn herself in. A Russian informant claims Salt is working for the rival country, turning the tables on her otherwise normal life… as the audience understands it.

This leads to “those” action scenes, Salt forced to leap from truck to truck and weave between cars to escape the hails of bullets fired her way by agents. There’s an eclectic mix of action here though, strained credibility or not. Some moments are aggressive, others more passive with a higher emotional toll. Almost all are expansive and lengthy.

No doubt this winding plot, writing credit going to Kurt Wimmer, has its own share of holes and contrivances, but the pacing doesn’t allow much time to let that sink in, the sure sign of a solid thriller. It has too much energy to wait around, tossing in either one of those “smack yourself on the forehead for not getting it earlier” twists or shoot-outs to showcase Jolie’s skills with a variety of tactics.

In fact, Salt may contain the best use of a taser this side of an episode of Cops when the drunk, unruly guy refuses to go down. Salt, captured by NYPD, knocks out the cop driving, using the stun gun to shock his body into accelerating and grip the wheel. It’s a brilliant bit of improvisation, realistic or not doesn’t really matter, the movie already setting up her skills in an opening scene with an impromptu rocket launcher of sorts.

Phillip Noyce is hardly the director for this type of frantic action, his political espionage pieces more subdued like Clear and Present Danger, but everything here is lively. It’s the right director for the backdrop of it all, giving meaning to the insanity of the set-pieces, and as such, giving them added life. Pay attention, enjoy the show, and don’t think about the whole process too deeply. 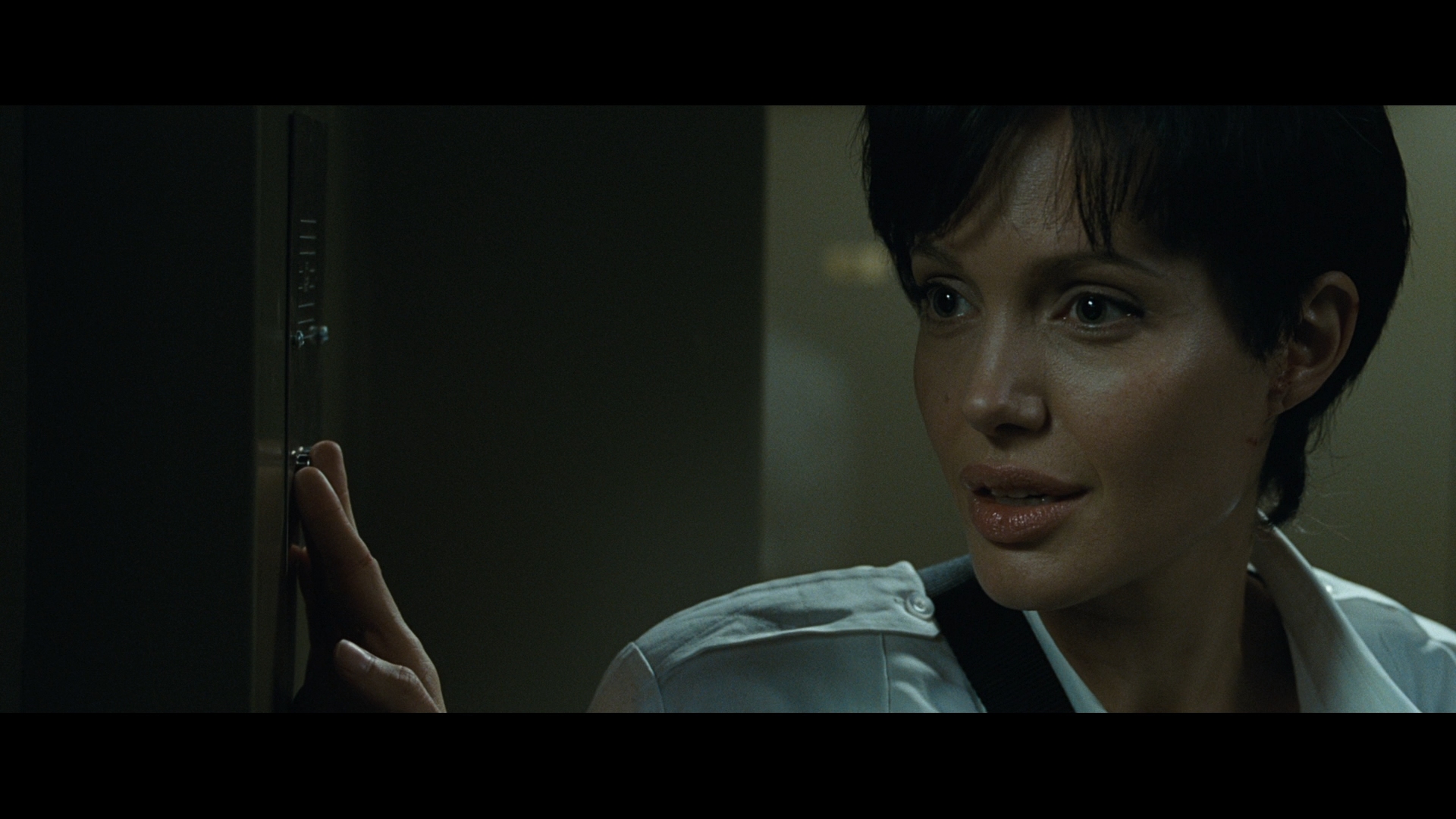 Sony’s Blu-ray release for this summer extravaganza is only “meh,” at least in certain aspects. Facial detail is typically exceptional, Liev Schreiber’s heavily textured face a stand-out. Jolie has a number of outstanding close-ups too, especially late at 1:21:44 (note: time stamps based on the director’s cut). It’s a consistent positive, medium range shots preserving a general level of texture too on faces, if not much else.

That’s Salt’s biggest weakness. Despite some superb aerials of the city and pans around to establish exteriors, the transfer never seems to grab a full hold on the material. Grain spikes wreak havoc on this AVC encode, causing backdrops to appear excessively noisy in spots, while resolved in others. Of bigger concern is a light layer of sharpening, leading to mild yet visible halos surround objects and characters. Schreiber has the worst of the lost with an impossible to miss outline at 7:13. The whole opening rescue scene is littered with it. It’s only sporadically noticeable later in the film, the dreaded high contrast edge the worst offender.

Black levels are much the same, wavering off and on as they want. At times, depth is rendered exquisitely, the image taking on a nicely dimensional quality, other artifacts not withstanding. Others fail miserably, leaving the image muddy and lacking those same attributes. It can certainly seem intentional, the many flashbacks containing distinct styles which are easily excused (heavier grain in most, intentional noise, etc.), but many of the scenes in present day carry that flatness.

Color is all over the place, succumbing to that garish teal and orange palette in spots, other times subdued, and in others briefly saturated. Flesh tones veer warmly regardless, generally within the realm of acceptability.

The rousing DTS-HD mix is more than sufficient though, a vast improvement over the video. The film starts rather routine until an explosion sounds the alarm for bass lovers at 24:25. Subtle events, like the passing of a subway train, keep things rocking in the low-end effectively, the bass tightly wound, clean, and precise.

The highlight of it all may be a series of car crashes about 56-minutes in, a slew of accidents occurring, each rocking the sub effectively without overdoing the whole effect. Eventually, one of them slips off the freeway onto a parked car below, generating the weight and power of that moment, while glass shatters into the rears to complete the effect. It’s an example of how clear the audio is here, the shards circling through the surrounds with perfect fidelity. The crispness of it all is what hi-def audio is all about.

Shoot-outs begin to dominate in the third act, bullets whipping by, pinging objects, and popping off with an appropriate level of low-end work. Jolie begins shooting some bulletproof glass in an attempt to break through late, the interior of the room echoing with a burst of activity in the subwoofer. It’s fantastic design that this home version replicates flawlessly.

Director Phillip Noyce begins a commentary track, later joined by effects supervisor Robert Grasmere and music editor Joey Rand. A pop-up track provides the usual assortment of video features, and there is no other means to access them other than watching the movie. A stack of dull promo featurettes follow. Ultimate Female Action Hero is a piece on Jolie and how perfect she was for the role. Spy Disguise details the various looks used by the actresses throughout the film. Modern Master of the Political Thriller is a praise session for Royce.

False Identity takes a look at the special effects you probably didn’t even know were there, while a half-hour promo making-of Salt: Declassified is next. A 30-minute radio interview follows that. The Real Agents is the closest thing on the disc to being good, interviewing former CIA agents about their jobs. Trailers and BD-Live access remain.

Finally, there are three cuts of the film here: theatrical, director’s cut, and extended director’s cut. The extended is the most varied in terms of changes, including a revamped ending.

Note: Time stamps for these screens are all over the place. The problem seems to be Sony’s latest round of DRM causing the run time to mess up in playback. Eventually, that will be taken care of and this won’t happen anymore.