It’s hard to say why Elf needed the Central Park Rangers, a dark, sinister fictional group of patrolman who chase after Santa as he crash lands in the park on Christmas Eve. In a film with bright colors, sanitized rooms, and such a chipper tone, the Rangers are totally out of place, not to mention completely unnecessary.

The sense of danger added to the finale of the film is the lack of Christmas spirit that fuels Santa’s sleigh preventing his flight around the world. Isn’t is terrifying enough to the younger audience that Santa might not complete his toy run? Why introduce the pointless Rangers, shot with such a dark edge, the horses all black, the Rangers wearing faceless helmets (and also dressing in black) so the younger set could surely be bothered.

It’s about the only misfire in this Jon Favreau-directed effort, carrying elements of numerous holiday classics along with it, initiating feelings of nostalgia for Miracle on 34th Street (Gimbel’s department store a key element, amongst others), while generating its own idea of elves. To be clear, there are three jobs for an elf, and one of them is a cookie maker, a section of the elf employment industry that carries distinct danger in the dry season.

Buddy (Will Ferrell) is perfect for this fish out of water story, completely unfamiliar with the big city, sent to New York to find his estranged father. Pouring syrup on spaghetti, eating gum off the subway entrances, getting hit by taxis, spinning in revolving doors, taking too many flyers, and becoming overjoyed when Santa’s visit is announced in the store are scenes written for the over-the-top comedic actor. He does it all with charm, not with any aggressive overzealous nature, the role originally written for Jim Carrey who almost undoubtedly would have went there.

For all of its charm and color, it is easy to overlook the visual achievement Elf is. Those other elves are full sized actors, not little people or children. Ferrell is meant to stick out, and the forced perspective, split screen, and other effects used to bring his size to life are brilliant. In fact, they are seamless, so much so that they go unnoticed, the heftiest compliment they can receive.

It may take some time yet, modern internet cynicism unwilling to accept any current film as a classic, but considering the sheer garbage being produced during the holidays (Four Christmases), Elf is a current work of holiday spirit and charm. It’s exactly what powers Santa’s sleigh, or at least if this film’s mythology is to be believed. If you’re not on board, then you’re one of those people who keeps the jolly man in the red suit grounded. 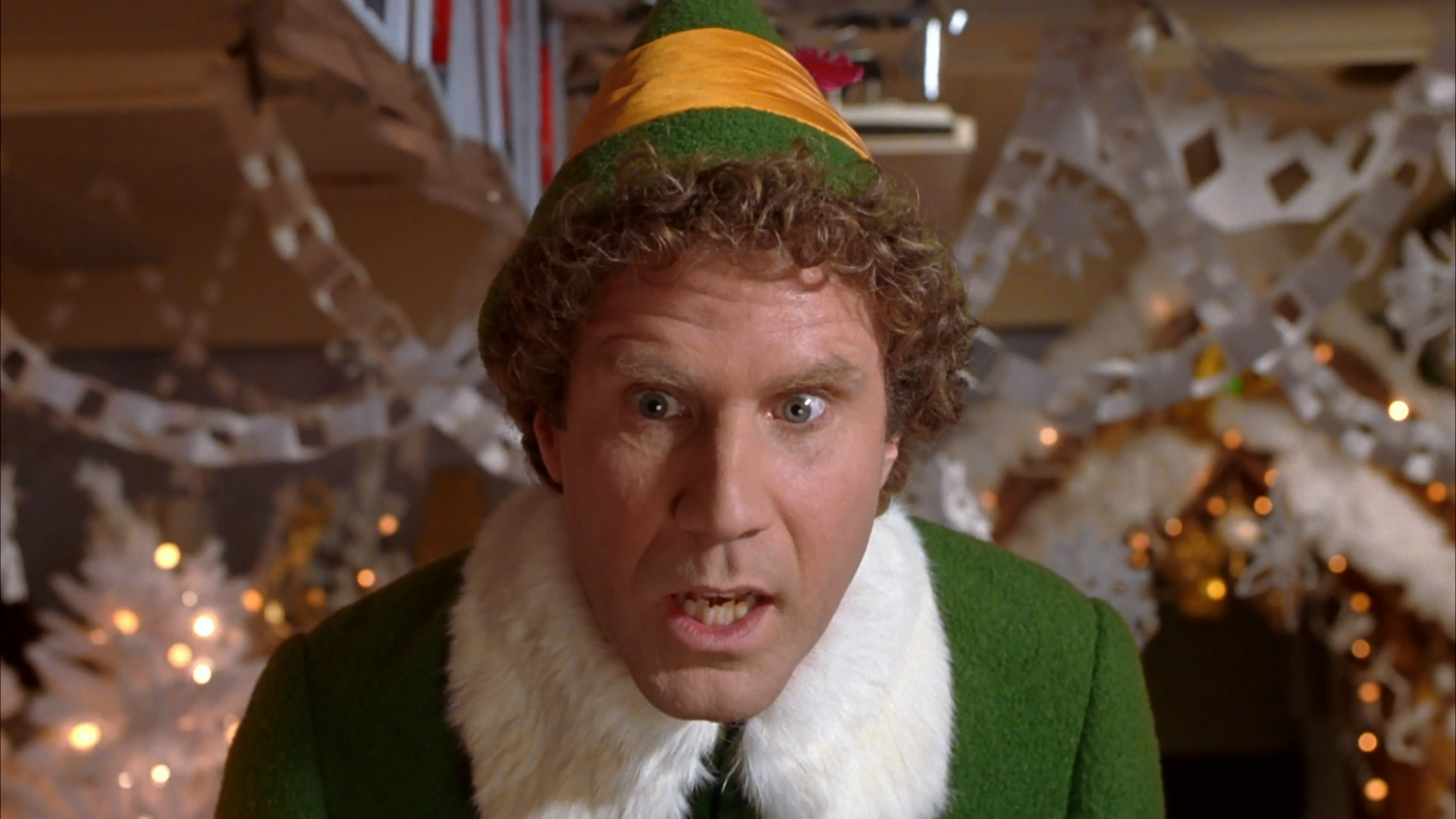 The DVD for Elf was a fairly famous example of how not to release a modern film to home video, and keeping the tradition alive, so is this Blu-ray. While edge enhancement has been toned down, it remains visible in certain scenes. Edges produce some notable halos, and that’s the least of this VC-1 encode’s problems.

Aggressive DNR is the real culprit, producing waxy, ugly faces that are completely devoid of fine detail. There is not a single close-up that produces any exceptional texture, Santa’s beard is hilariously mashed together into a blob in multiple scenes. Long shots, whether with crowds of people (the finale as they sing carols) or inside the store are simply terrible, faces barely identifiable in the masses. Some definition does survive, close-ups of the elves working in the shop revealing a heavy wool texture, but no amount of DNR will wipe all of that out.

Black levels can appear rich, which is fine until significant crush starts setting in. At 44:54, Mary Steenburgen’s black dress is nothing but a blob of darkness, the combination of poorly calibrated blacks and low light a nightmare. Even worse is the oppressive artifacting, littering walls and other objects with hefty blocks of compression. Whether it’s the encode or remnants from the DNR is a mystery. Regardless of the cause, it’s completely unacceptable.

Looking for positives (and there are few), the colors are richer and bolder than ever. This greatly benefits the workshop scenes early in the film, although enhanced saturation only increases the pasty nature of the flesh tones, or makes them appear warmer than they should. For every benefit, there seems to be a downside.

The TrueHD mix given to the film is perfectly suited towards its needs, right up until the end when it really kicks in. The movie is peppered with light Christmas jingles, staying in the stereo channels and producing a perfect level of fidelity. Any surround bleed is barely noted. Street level ambiance once into New York is meager, although some general city sounds can be made out for a bit of immersion.

Home theater fans get a treat 52:30 into the film, the snowball fight producing some great tracking effects, more so once Will Ferrell’s super-arm gets in on the fun. Each tossed projectile speeds front to back and even side to side, whatever is needed for each toss.

As the finale kicks off, the subwoofer hits overdrive, the engines of Santa’s sleigh reaching some fine peaks on the low-end. The same goes for the collisions with the ground, producing a hefty, natural jolt. Surrounds take on some action too, the sleigh passing overhead and left to right, captured in whichever channel needs to takes over the workload. Clarity is wonderful, and directionality flawless.

Extras include two solo commentaries, one with director Jon Favreau, the other with Will Ferrell. Why they weren’t just combined into one, especially since Ferrell’s doesn’t offer much, is anyone’s guess. Nine separate featurettes become one documentary, running 90-minutes all together. Two pop-up features, one a barren fact track, the other Focus Points with video featurettes, are decent. Eight deleted scenes include an optional Favreau commentary, while a couple of songs are available for “Elf Karaoke.”