Something about Madagascar 2 feels forced and dry. The opening segment of a young Alex being taken from his family to be put on display in the Bronx Zoo, an obvious take on The Lion King, does set up the original film nicely.

The viewer is then rapidly strung along on a brief ride through the original in news report form, and then another cut to the four lead characters boarding a plane to go back to New York. Why the animals would think they would be welcomed back after being banished in shipping crates is anyone’s guess. Of course, this is a film with talking animated animals, so all bets must be off.

Madagascar 2 is focused on its characters and story for this second round, and slightly less on the humor. Major laughs are rare, and the film is content to deliver general smiles. Writer/director Eric Darnell returns, along with newcomer to the series Ethan Cohen with a script that tries too hard to mimic the first.

Alex (Ben Stiller), Marty (Chris Rock), Melman (David Schwimmer), and Gloria (Jada Pinkett Smith) are again in unfamiliar territory, even if it looks awfully similar to the lush African plains of the first film. Scenes of the characters trying to adjust are repetitive and familiar, lacking the mild charm of the original. Some beautifully animated moments of sunsets cannot make up for the lack of freshness.

There is also a lack of care in terms of animation on the characters. Alex is shown to have a birthmark on his paw, which for some reason disappears and re-appears throughout the film. It wasn’t present in the first Madagascar either. The same goes for the scar on Marty’s rear before the credits, a quick gag and nod to the original that falls flat since it is only seen once.

Madagascar 2 is pedestrian anthropomorphic animal kids fare, the kind of animation studios love to push out these days. It lacks a spark or some form of originality to draw the viewer in. Kids will probably love it, although how many of them will even know why the zebra is referencing Roots will remain an unanswered question. 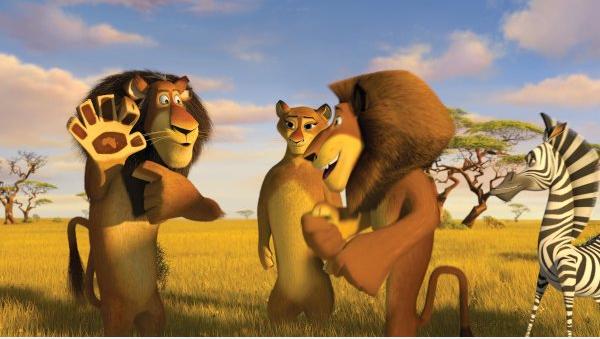 Dreamworks delivers a sparkling AVC encode that meets all expectations. In looking hard for flaws, some ringing is evident, particularly as a drunken Julian approaches the gang sitting on a rock. Trees in the background contain noticeable small halos.

You need to be looking for that however, and the majority of this transfer is breathtaking. Colors are stunning, depth is flawless, contrast is bright, and detail is immense. Complex fur and long shots of the African plains are incredible. There are no signs of aliasing, and the encode is free of banding.

A crisp TrueHD track is satisfying, marred only by the sound design. The jungle areas are flat during dialogue scenes. General animal calls, grass rustling, or something would have been wonderful to establish ambience.

That aside, action scenes are bristling with activity. A volcano rocks the subwoofer in the third act, along with a dam bursting. Movement tracks in all channels wonderfully, and scenes with a crowd (animal or human) flawlessly envelope the listener. The plane moves through each channel effortlessly, and the front soundstage is as expansive as the rears.

A commentary features co-directors Eric Darnell and Tom McGrath, and producers Mark Swift and Mireille Soria. This is also carried over into a picture-in-picture track that fills gaps in the commentary with various behind-the-scenes items such as storyboards. A pop-up trivia track is also available to view with the film as well.

A string of featurettes, including one that feels pulled from the first movie about the voice actors, fill out much of the menu. General making-of info is bland and promotional, some info on a research trip to Africa is mildly interesting, a promo for the Bronx Zoo blatant, and a Swahili lesion rather general. Two penguin shorts (including bonus promos hidden above and below this menu selection) are marginally funny, songs are purely for the kids, and a game is forgettable. Trailers and BD-Live support (with one feature) are left.