A-Team doesn’t care. B.A. Baracus (Quinton “Rampage” Jackson) is, as the card states near the beginning of the film, “somewhere in Mexico.” The movie is so over-the-top, it doesn’t matter where, so much as it matters that people are being punched, shot at, and killed en masse. That’s what it does best, so why does it matter which part of Mexico?

In fact, there’s so much going on, it takes 20-minutes before the title card pops-up on screen. Who are these characters? Who cares? With three writers to its credit (Joe Carnahan, Brian Bloom, Skip Woods), each knew the audience was well aware of who these guys are. The update simply places them as Iraq war veterans, then letting them do their thing. It’s about the one-liners, the guns, oh, and piloting a falling tank into a river.

Yes, that may be the new absurd height for modern action films, Faceman (Bradley Cooper) firing off a tank’s cannons as it falls from a destroyed cargo plane. With only one parachute still attached to the tank (they always plan ahead of course), the entirety of the sequence’s green-screened glory is a comedic treat. The whole movie is really, this despite a contrived and convenient plot wrapped around some stolen $100 bill printing plates.

Much of the dialogue centers around how this rag-tag group plans ahead for everything, and it should. The finale is so complex and ridiculous, it makes the dive-bombing tank sequence look calming by comparison. Shipping crates drop, cars flip, helicopters… do stuff, rocket launchers go boom, and in-between that wall of sound are one-liners and plot threads wrapping themselves up.

Whether you follow it or not, the goal of the A-Team is to entertain. It does that, well too. It’s mind-numbingly stupid, but it should be. The film’s opening has Bradley Cooper trapped inside a series of tires ready to be lit on fire, Baracus shot in the arm, and a last second escape topped only by a 3-D movie sequence (not what you think) that becomes the highlight of the entire film.

The casting is perfect, the foursome working well in tandem despite becoming the modern action movie archetypes, more so than the original series could ever wish them to be. It’s all setting up next summers action feast, A-Team vs. The Expendables… wait… that’s not happening? Aww. 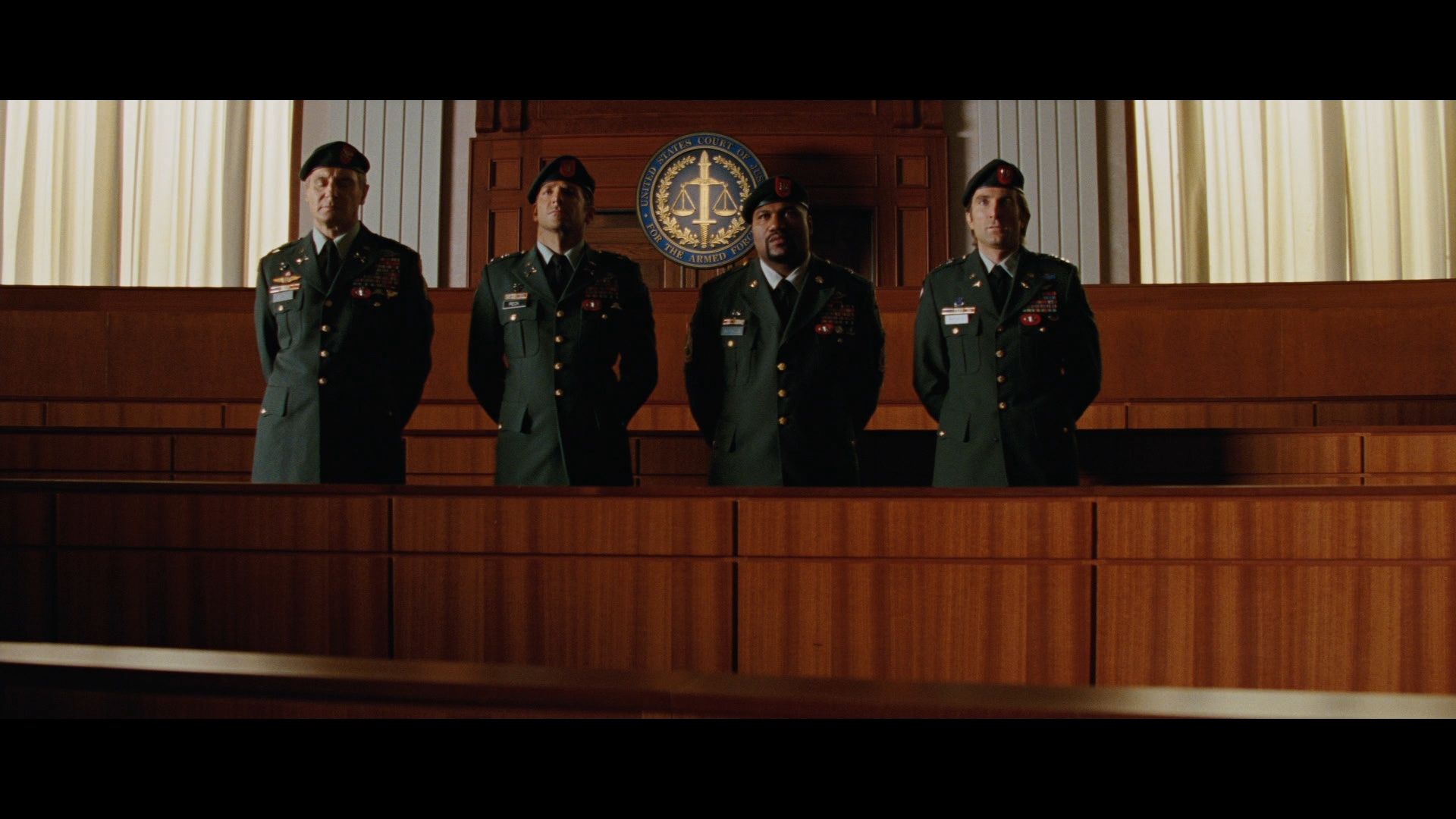 Fox’s AVC encode is pleasing to the eye, bright and saturated enough to deliver some eye-popping explosions (cliché as that may be), along with rich texture. Facial detail can be superlative, close-ups rife with high-fidelity detail at times. Even in the mid-range the definition excels, and some of those aerials are fantastic.

Sadly, not much of that is consistent, Liam Neeson falling victim to the dreaded smoothing effect that is far too pervasive thanks to the wealth of digital filmmaking, A-Team shot with the Panavision Genesis specifically. Flesh tones take a hit from the ghastly orange and teal assault, another effect of that digital intermediate. It’s comical to hear Neeson make mention of Cooper’s deep tan when almost everyone in the movie shares the same spray-on look. Other primaries are fine when they’re allowed to be, some lush greens dot the forests and the opening deserts are overloaded with various browns.

Sharpness is typically firm, maybe a little too much so as some of the city-based aerials show off a hint of excessive sharpening. Some edge enhancement is visible, along with a small layer of aliasing. It’s nothing too offensive. Other shots can be littered with noise, sporadically so. Sometimes a background will become awash with artifacts, other times a brief clip in an action scene may swarm with visible low light noise. These are all brief issues.

Generally, the problem with digital filmmaking (aside from the unnatural look in the first place) comes down to the black levels. A-Team holds firm in this regard, and in actuality excels. Few scenes dip below a reasonable level (Cooper’s trip through the sewer for one), and the source material produces excellent levels of dimensionality, with hardly any loss of shadow detail. A slightly hot contrast only seems to blot out detail that wasn’t going to be there in the first place (see: smoothing), only accentuating the image’s overall depth.

You’ll find few qualms with this boisterous DTS-HD audio mix, and you won’t have to wait long either. The entire opening scene is one massive action sequence, with powerful luxury car motors rocking the sub, to dueling helicopters buzzing through the soundfield. You even get to hear someone throw up distinctly in the right front, because surely that’s what you bought your audio system for.

The sky-based tank battle carries all the same qualities, military drones zipping around as they assault their targets, and missiles blasting into the hull of the cargo plane. Fired tank shells assault the subwoofer, their brief “whoosh” passing front to back effectively.

General gunfire during chases or shoot-outs is crisp, the low-end keeping quiet so it can deliver its full impact from a mass of explosions that send shipping crates barreling down onto our characters. Every bump is greeted by a satisfying rumble, tightly controlled without becoming overbearing. Alan Silvestri’s score completes an effective wrap-around experience, balanced amongst the other elements without fault.

This review is based on a rental exclusive copy (that contains no extras) as Fox does not send out screeners prior to release dates. Should a retail copy be obtained, this review will be updated.

Note: Time stamps for these screens are slightly off due to Media Player Classic being a putz.