Shrek has finally regained some its charm after the mess that was Shrek the Third, Forever After the spark this series needs to continue on for… oh… this is the last one, huh? Even though it made like $300 million they… oh, right. “Final Chapter.” That does sort of make sense.

Well, at the very least the series is ending on a high note, even if that note isn’t quite as high as it once was. Much of the charm of this series was seeing these fairy tales lampooned, a charm that hit a barrier once this became a trilogy. It’s still an issue for Forever After, still searching for that magic, but peppered with some truly wonderful and imaginative sight gags.

Shrek (Mike Meyers returning) signs a contract with Rumpelstiltskin to get one day of his old life back, flustered over his routine daily grind with his family. This reverts all of Far Far Away to an alternate reality, one where Shrek was never even born. Cue the regression gags, Gingerbread Man (Conrad Vernon) now stuck in gladiatorial combat, forced to fend off a herd (?) of animal crackers. The three pigs are forced into slavery, feeding ‘Stiltskin’s giant goose some ham (!). It’s dark and twisted, but all hilarity.

Our story takes us back to the first film, albeit in a different way. Shrek must win back the love of his life Fiona (Cameron Diaz), who now reigns over a group of rebellious ogres who want their kingdom back, ‘Stiltskin not kind to their type. Surely one could look at this Back to the Future style and probably discover some plot holes (would Fiona be the same pers… err, ogre her entire life and still become a rebel?), but we’re dealing with kid’s fare, and it’s all sufficient.

Familiar territory or not, Forever After is typically quite dark, a bit refreshing in these days of glitzy, indistinct animated features. It stands out a bit, and becomes a memorable part of the series as opposed to a bottom rung clunker. Besides, it introduces what might be the best of all the bit-players in this entire series, a spoiled rotten kid who continually asks Shrek to, “Do the roar!” It’s a running gag that works, and provides the spark this one needs to get moving. 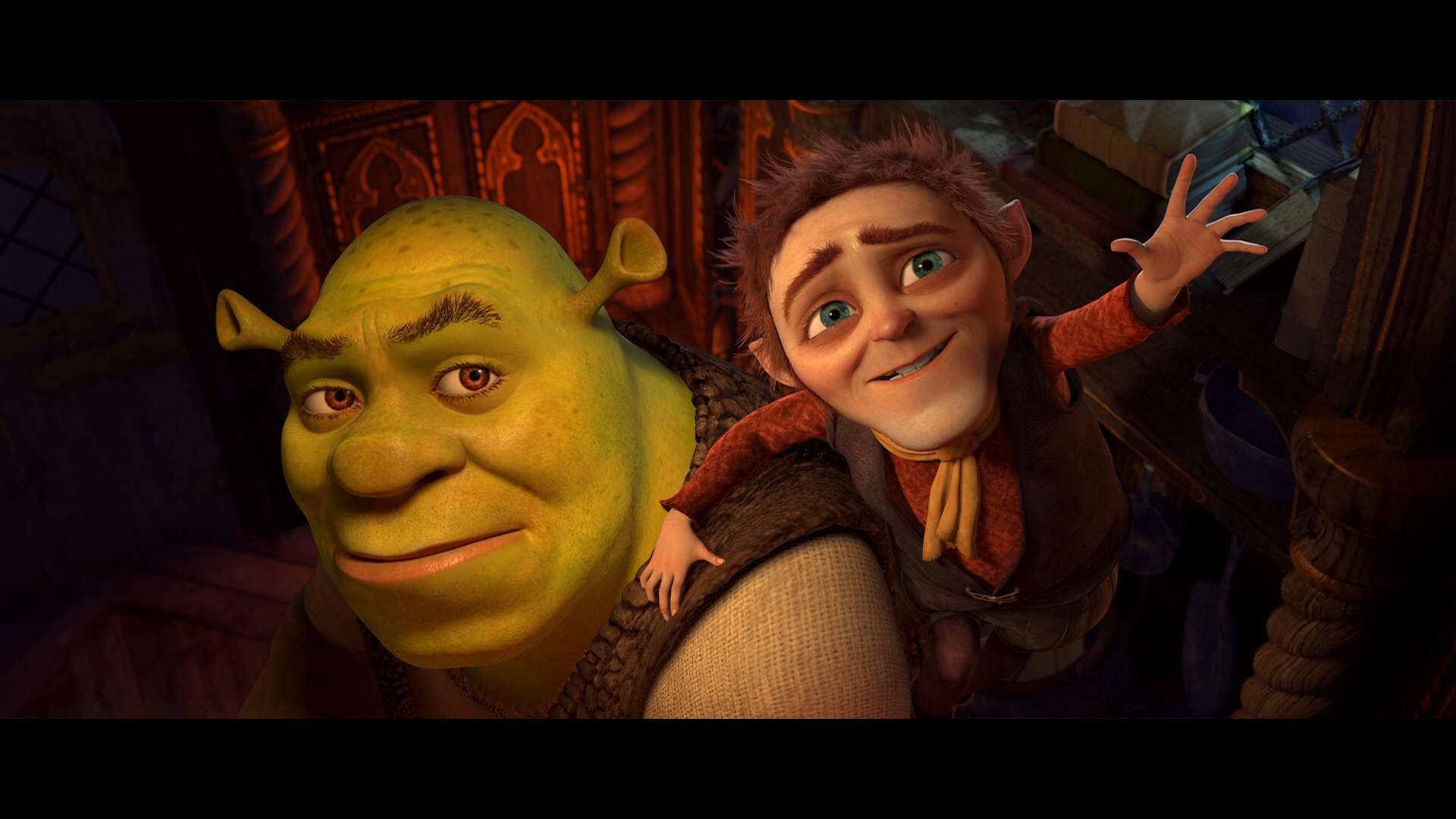 Dreamworks’ AVC encode for this final installment is glowing in the early portions of the film. Colors are vibrant, Shrek’s overwhelming green skin just one part of the extravagant palette on display. The rolling hills, the brightly painted houses, the balloons at the party; it’s all a never-ending (ironic?) parade of colorific (ugh) eye candy. That continues into the night, even into the dim halls of the ogre camp. Lit by flame, the darkness does nothing to hinder the color, the marvelous deep blues of the nighttime sky awe-inspiring.

Black levels hold too, generating some spectacular dimensionality that renders that need for 3D moot. Obviously shot for 3D, this 2D presentation still has it, those dizzying flying sequences in the sky rendered without fault. Complex or not, there are no discernible compression issues to any scene. There is a lot of movement throughout, the animation itself having more than just some limited merit. The finale has loads of action across the castle floor, all presented with some sweeping virtual camera pans, and without any break-up.

Sharpness is, of course, flawless. You’ll be hard pressed to find an animated film of this nature that doesn’t meet that standard short of intent. Texture is stunning, from the pores on Shrek’s face, the fur on Donkey or Puss in Boots, to the clothing worn by, well, everyone. Even Gingerbread Man gets some pants for the ultimate in political correctness. Views of the castle establishing the new or old kingdom are nothing short of HD perfection, the rolling hills and their thousands of visible blades of grass replicated in 1080p without an ounce of aliasing. Shrek’s humble abode is the same, littered with stray leaves and grass, each rendered precisely.

The film opens on some storybook pages, giving viewers the multi-movie plot up to this point, similar in style to the classic Disney efforts. All of the above, from the color to sharpness, are in full effect here too. Every line is defined, and every hue saturated as far as it will go. This a transfer that never once loses sight of what it should be, even in those opening frames.

A rare TrueHD 7.1 mix is included here, a rousing effort with a focus on generating depth, much like the image. This is a precise audio mix, also falling into the category of “perfect” in regards to it positional capabilities. Everything that should be tracking into the surrounds does. From the start, horses pass through the screen, their hooves and saddles rattling right on through the stereo channels and into the surrounds, actually splitting the two sets of rears. It’s not subtle, but distinct.

Party chaos is abound as Shrek tries to get a free moment, bested not long after when Shrek signs the contract at 19:36. The carriage they’re sitting in dissolves, creating a genuine wrap-around effect as objects and wind swirl about, passing through each speaker naturally. Another highlight happens as Shrek is restrained by the witches, their chomping chains taking a very specific route front to back or side to side.

If it’s missing anything it’s more aggressive bass. At one point, Shrek kidnaps Donkey, taking charge of a giant hanging ball in Rumpelstiltskin’s castle, smashing into a wall with almost no impact. When it falls from the ceiling, it makes a decent little thud, but still nothing to get excited over. Dragon roars, Shrek roars, various fights, and even fire bombs register, but not fully assault the hearing senses. It’s by no means flat or lifeless, just weaker than expected.

“Animator’s Corner” is the first extra, mirroring the filmmaker’s commentary in a pop-up feature with storyboards and other pieces scattered around the film. A rather weak interactive map produces sketches and other artwork to look at, but it would be easier with just a general menu. Spotlight on Shrek is the first in a series of lackluster featurettes, this one focused on the history of the series. Secrets of Shrek Forever After aren’t so much secrets as they are tidbits on the voice actors and character designs. Three deleted scenes (including one that would have included the Three Blind Mice) are shy of six minutes.

Conversations with the Cast is exactly what the title says, an unspecified panel with the main stars. The Tech of SFA focuses on how the animation process has improved, the closest this disc comes to actual, viable information beyond the commentary. Music videos and the typical Dreamworks Animation Jukebox are here, along with trailers.