Eat Pray Love takes you into the inner-workings of a woman, where the thought process is about a confused soul who doesn’t know what she wants out of life. Why? Because she is a female. It’s where the thought process says that when a guy is willing to drop everything to be with you, your goal is to ditch him to travel the world to find your inner self. Why? Because you are a female.

Eat Pray Love is a film of many titles, potential winners being Loved and Lost, Sleep Around Fantasy, or Spiritual Healing, because apparently getting a leg injury healed lasts all of 30 on-screen seconds. Why? Because this is about a female.

The plot here exists because it existed in every ridiculous romanticized movie, the American woman unable to find the right man, and a it takes a good guy to swoop in and save the day. The difference? Eat Pray Love has four locations with which to do this, instantly elevating the hormones, sorrow, and forced drama.

Eat Pray Love has one of those endings, where the woman must travel across the countryside to meet the man of her dreams because dammit, there were enough film reels on set to make those stunning visuals happen one more time. That boat trip and all of those foreshadowed events prior? Yeah, that can happen because Julia Roberts wished for it. That random medicine man in the middle of nowhere? Yeah, he can cure everything, and he is quirky.

The rather egregious use of immensely beautiful location shoots to add some charm to the pitiful dialogue exchanges that are so far flung from reality are only a few of the things putting a damper on this wealth of stupidity and woman-oriented drama. It doesn’t need to make sense, and it doesn’t need a plot because every true movie-going female will find what they need as Javier Bardem traverses the Bali countryside to initiate the meet cute. Why? Because it looks charming and has the air of being insightful, and that’s all women need. 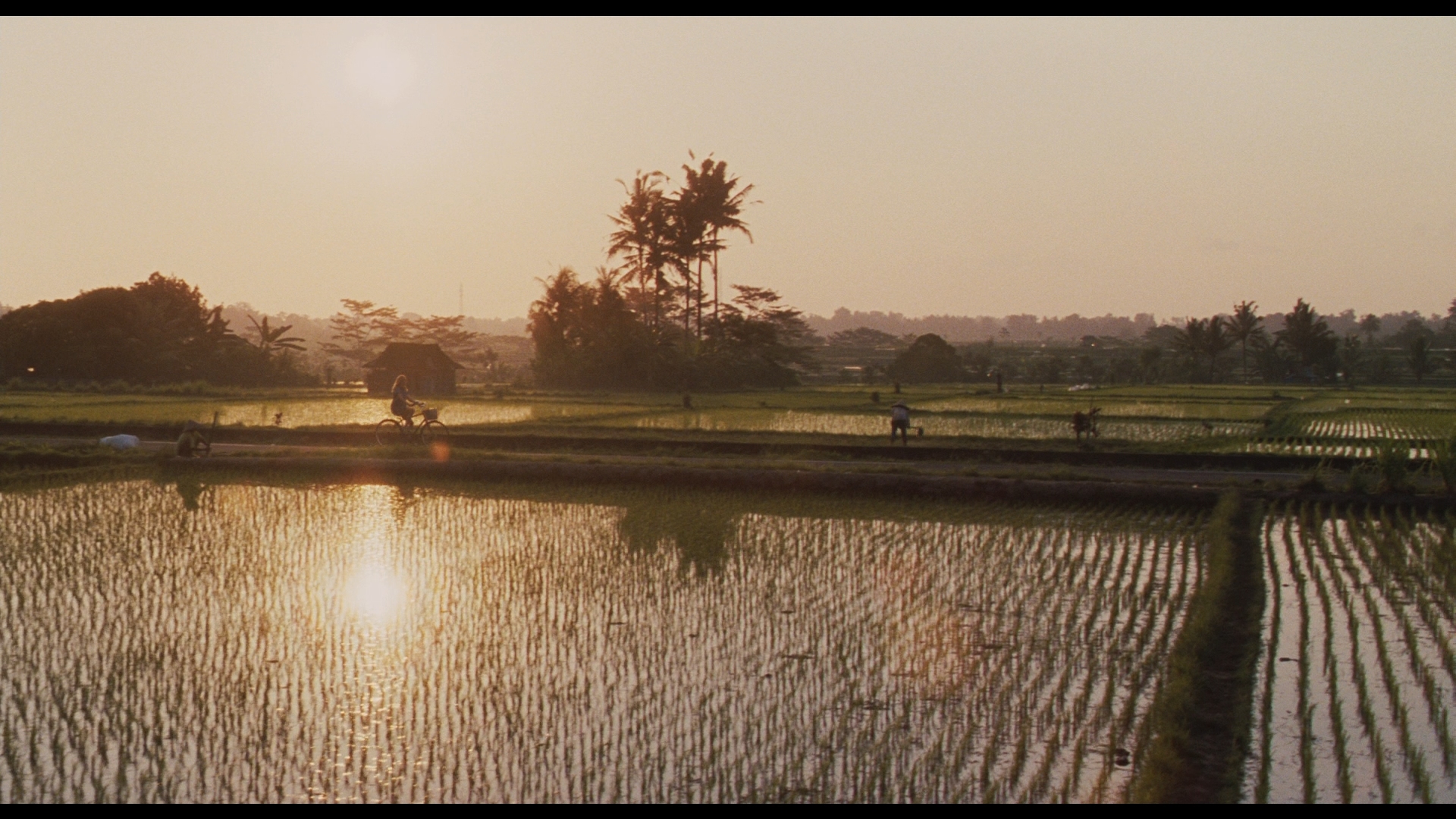 Everything in Eat Pray Love is filmed with a slight filter, at times applied more intensely than others. Light sources bloom, skin has a slight glow, and colors appear to bleed. It’s more aggravating in some scenes than others, at times appearing to make characters into saints (James Franco at 12:59 hilariously overdone), and other times making the scenery appear hazy, accentuating the already strong cinematography.

This all but eliminates the fine detail in the mid-range, even diluting the blacks if the bleed carries over. The latter is at the very least consistent, reproducing the image with a firm depth, even if it’s not the deepest. Heavily saturated colors are striking at times, the shrine during the Indian wedding loaded with lavish yellows and reds that come right off the screen. Lush jungle scenery produce some stunning greenery, the color depth truly impressive and loaded as far as it will go at times, without a hit to the generally natural flesh tones.

In close, all of that filtering is barely evident, an array of texture on display from scene to scene. Facial detail is stern and typically consistent, few scenes wavering in this regard. Richard Jenkins has a number of superlative close-ups during the India trip, and Julia Roberts is given a countless array during the film. The ceremonial wedding attire during that above-mentioned Indian wedding is a sight too, the intricate detailing and trims defined and resolved without flickering, aliasing, or other technical issues.

Sony’s AVC encode doesn’t seem to have any nagging technical issues, a hint of artifacting against some of the backdrops, like the wall at 8:20, the only notable fault. Some chromatic aberration is noted during the opening and closing credits too. Regardless, it’s an impressive bit of compression considering the film is approaching 150-minutes in its director’s cut form, also included on the disc. All of the wide, quickly panning views of the various locations hold together, and the same goes for any complex shot involving a smattering of objects. It is a beautiful film, cinematography by Robert Richardson, and this disc presents it well.

This DTS-HD track is notable for a few reasons. One is the constant presence of immersive ambiance. Those scenes of quiet tranquility translate to Blu-ray with the chirps of various insects and birds, and in the end quite peaceful actually. The track never misses a chance to push something into the surrounds even in New York as some thunder envelopes the room eight-minutes in.

It also takes full advantage of the score and soundtrack, which fills the room flawlessly. There is a strong low-end presence where required, the bass of a local tune in India around 58:40 waking up anyone who fell asleep by that point. It simply destroys the sub yet somehow keeping the balance. There’s not a lot of challenge to keep everything level since the film is rather serene, but dialogue is always manageable.

One point of note is a late conversation between Roberts and Bardem at 1:56:00, where a high-pitched screech is heard in the mix. It’s not completely overpowering, sounding more like a light ringing in your ear. That’s either some really annoying insect or animal (very possible) or an error on the disc itself. Either way, it stands out in an otherwise reliable audio presentation.

Extras here are mostly filler, Ryan Murphy’s Journey the first in a series of a featurettes as the director describes his take on the project. The Beginning of the Journey lets the book’s author Elizabeth Gilbert tell her story. Playing in India focuses on that section of the shoot, while Finding Balance details the Bali filming. A music video, trailer, and BD-Live support remain.