Hunt to Kill is Stone Cold Steve Austin’s take on Sylvester Stallone’s Cliffhanger, minus the cliffs… and the hanging really. Instead, the plot takes place in a forest, filmed in British Columbia, undoubtedly to save costs.

We follow Austin as he guides a group of criminals to their big score, lost after their boss set them up. Wouldn’t you know it? Austin happens to know his way around the forest, and wouldn’t you know it x2, his only daughter is kidnapped by this same group. How convenient.

The film opens though with Austin and Eric Roberts on a stakeout, staring down a trailer home loaded with drug activity. As soon as you can say “predictable plot point,” Eric Roberts goes down in flames, his name appearing on the credits after his character has been dropped from the story. Maybe it’s there to give Roberts fans a glimmer of hope that their favorite actor survived, but that’s just not meant to be.

Everything here is paper thin, the character development so poor someone deemed it necessary to flashback to previous appearances just to show audience who is lying on the ground dead. That’s not even the worst of the recycled footage, some of it reused with zero care for continuity. Austin’s character is pushed down a steep, rocky hill late in the film, climbing back up what are clearly two different surfaces, switching back yet again before he reaches the top.

Much of the film concerns the crew walking through the forests, getting into small scuffles with each other, the villains acting like idiots, and the repeated escape attempts by the cliched know-it-all daughter (Marie Avgeropoulos) failing miserably. It’s as repetitious as they come.

Hunt to Kill ends on a raucous brawl between Austin and bad guy-extraordinaire Gil Bellows, the latter who simply won’t die after repeated falls that should kill just about anyone. Oh, and if you were disappointed by the lack of audacious punchlines to the kills earlier, just wait until the final one where Austin says the title. That’s a humdinger. 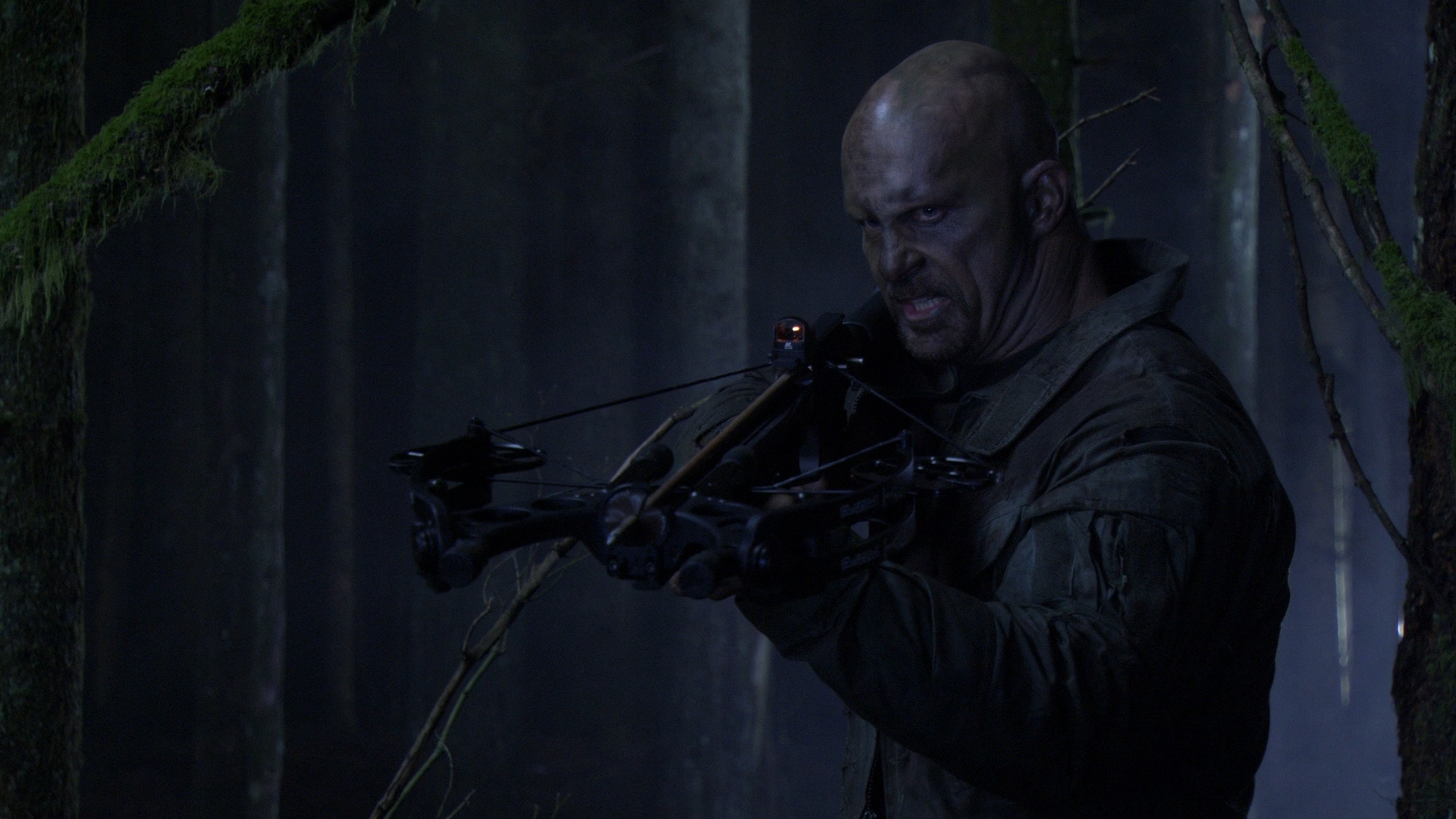 Hunt to Kill was shot digitally, carrying all of the benefits and detractions a digital live action presentation is expected to have. The opening scenes in broad daylight are stunning, a full quarry of brush, weeds, and dirt. The definition and clarity here are remarkable. The earthy color tones are perfectly suited to the image, the close-ups of Austin and Roberts looking over everything equally defined.

This type of refinement generally holds outdoors. This AVC encode produces some of the more remarkable forest views on the format yet when the crew is wandering about in the daylight. Moss covered branches are incredible, and the forest floor is littered with brush that remains fully resolved. Greens still carry that brown/orange hue, but are deep enough to create satisfying colors. Flesh tones are natural without any extravagant intermediate tinkering.

Facial detail is not as consistent, Dominika’s (Emilie Ullerup) face looking smoothed over on purpose. It happens in almost every scene she is in, other characters undergoing that same process with the effect applied randomly. Austin’s coarse, gritty face continues to take on dirt and mud, the end result being some fantastically resolved close-ups, the image purity on par with almost anything else you can put it up against.

Stock footage is utilized early, a chase sequence pulling some shots from who knows where. Those clips are brief enough not to offend, while the actual movie suffers due to the same issues like video noise. The latter is an inconsistent presence, readily apparent during a short-lived rape scene around 35:41. Low light can cause the same problems, although minor compared to the meager black levels that dilute the image. During the day, it’s hard to find fault with them, but when the sun sets, it’s all over. The image loses its dimensionality, and the video takes on all of those issues typically associated with digital filmmaking. Without the gray quality, this is a transfer that comes awfully close to achieving visual, eye candy perfection.

A TrueHD mix presents this mundane audio mix the best it can no doubt, the end result being a fairly flat, boring audio experience. Despite being in a forest, there is no ambiance to go around, the locales apparently devoid of wildlife. Dialogue lacks some tightness, the opening conversation between Roberts and Austin especially diluted.

Surrounds are utilized sparingly, capturing some light action as Austin fires a crossbow, or enhancing a punch. Their most aggressive moment is (again) the opening sequence. Flames begin to engulf the trailer, kept firmly in the rears where appropriate, and spreading through the other channels as the camera switches location. The eventual explosion is a kicker too, debris scattering through the soundfield rather effectively.

Bass is the heaviest element on display here, the early gunfire carrying a bit of weight, if not the most aggressive. The above-mentioned explosion takes on a life of its own in the subwoofer, as does the ending which contains an equally powerful jolt. The scrum before that moment contains some beefy falls, a trip down a flight of steps hilariously overdone to enhance the action, but admittedly effective in selling these two brutes going head-to-head.

The score can seem to be forgotten in all of this, rarely breaking noticeably free from the confines of the front channels. It’s fairly weak in the mix too, hardly carrying much intensity. That said, the stereo split is handled well, the different elements of the generic “let’s copy Rambo” themes delivered properly in the fronts.

The only extra on the disc, this excluding trailers, is an eight-minute making-of. It’s a generic piece with praise for all involved.