Scott Pilgrim moves a little too quickly, endangering an audience not quite ready for how the film is willing to go into sheer insanity. Scott (Michael Cera) begins brawling with Matthew (Satya Bhabha) at a concert, literally after Matthew crashes through the roof and begins an entire song and dance routine.

So what? Pilgrim knows its audience. The film even plays with the Universal logo, giving it a pixelated make-over and playing a chip-tune theme over it. The film is so far removed from reality as to embrace it, entering itself into a mash-up of video games and comic books while celebrating the culture. Do you know why Scott’s foes splatter into coins when defeated? Are you versed in the history of Pac-Man’s name? Will you grasp a reference to Double Dragon II? How about Ninja Gaiden?

If so, the film will undoubtedly resonate with you, leaving the audience somewhat smaller than most execs would like. Appealing to a mass audience is difficult, but Pilgrim is there for someone who wants “different.” Nothing has ever really been attempted like this, the clever variety of battling seven exes of Ramona Flowers (Mary Elizabeth Winstead) enough to keep movie-goers engaged.

The film is, at least on a base level, repetitious. It should be. Video games inherently are about repetition, picking yourself back up, and trying again. Scott is the ultimate gamer, replete with completely unexplained powers that lets him dragon punch people out of mid-air. It’s like he picks up the controller and initiates special moves on himself. The seven “boss” characters per se are part of the game, much like gaining the eye of Ramona.

Besides, these fights are immense, filled with flashy, vivid choreography. Watching Michael Cera, typecast as always as the quite underachiever, go berserk with vicious roundhouse kicks, flurries of punches, and even weapons is completely unexpected.

The script remains witty, co-written by Michael Bacall and director Edgar Wright. The pacing here is moves as quickly as the next edit, which literally moves a single conversation from one location to the next in a single swipe. There is no time to waste much of anything.

Scott Pilgrim gets itself, even if a wide audience won’t. It doesn’t poke fun at gaming/comic culture, but celebrates it. It loves being zany; it relishes every opportunity. From Seinfeld references to the Vegan Police, Pilgrim satisfies every pop-culture and societal urge, assuming you get all of that. 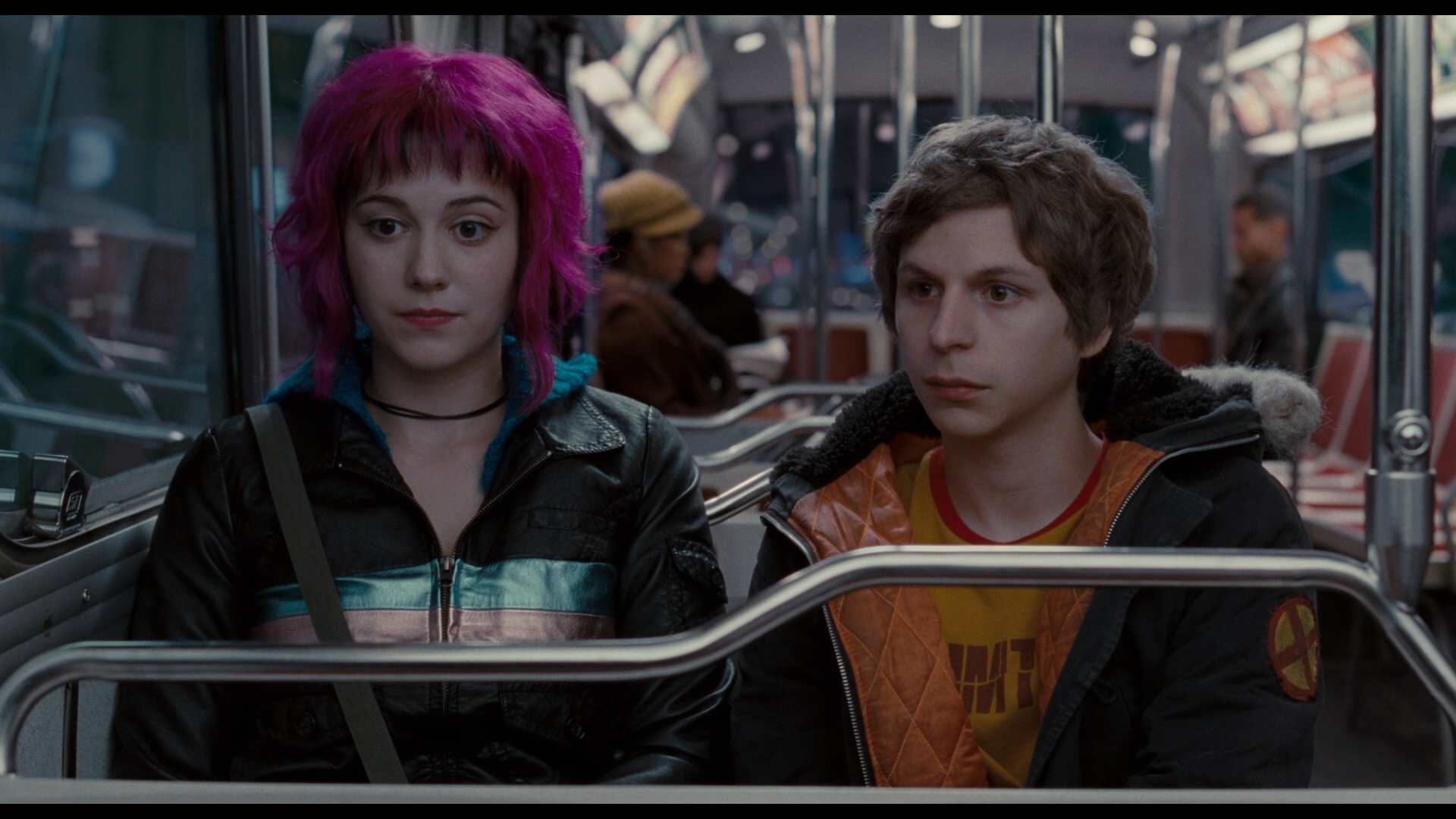 Scott Pilgrim is about as aggressive as a video presentation as you’ll find, hence the need for a strong AVC encode, which Universal provides. The movie was shot on a variety of formats, film and digital included, the Phantom HD servicing the latter. At times, the differences do show, a wildly varying level of facial detail, sharpness, and overall definition creating transitions between the styles, wherever it seems they are. Importantly though, the effects are subtle, and in a world where “anything goes,” the same can hold true for video.

Pilgrim is not the be all, end all of video. In terms of color saturation, it comes off as subdued. This is a presentation that should be overflowing with intense color, and instances like that are few. The first part of the film is naturally bland, Scott waiting for the love of his life to appear. Scenes with Knives (Ellen Wong) are pale, lacking intensity. Even up to the end though, Pilgrim never dominates the color spectrum, even the bright blue sword used by the final ex lacking in its intensity. Flesh tones remain natural, and save for a few shots, much of the movie lands itself on that same level. Intent, as it was in the theater, seemed to aim for a larger-than-life look, and this disc doesn’t carry that same wallop.

Black levels are typically rich, giving the images some dimensionality where the sharpness may falter and shadow detail maintained. They definitely carry a better, more consistent weight than other aspects, like the mid-range texture. There are plenty of shots, however rapidly edited as they may be, where clothing can produce well defined stitching, and another where the whole thing appears smooth. Of note is the Clash at Demonhead concert at 1:02:00, Envy (Brie Larson) appearing digitally smoothed over. It’s not just the level of visual effects on display, various comic book sound effects popping out of the frame. Other scenes, including the fights, actually reproduce a defined level of facial detail. The style here becomes a distraction. Shots of the final ex upon his “throne” per se are equally poor, lacking in focus and overall clarity.

With all of the quick-cutting, pans, split screens, and other shifts in visuals, the encode never dissolves into a layer of compression. A light grain is present, at times barely noticeable against the imagery, fully resolved without fault. It’s doubtful anything is really wrong with the encode itself, that aside from the slightly dull palette.

No doubt the music is the powerhouse aspect of this DTS-HD mix, a resoundingly strong, aggressive low-end throbbing as it tries to keep up with the drum and bass work. It doesn’t take over, but adds a natural layer to the mix, keeping the lyrics and electric guitar pulsating from the front and surround channels. Every concert scene is a success, the battle with the Twins the close winner, dueling bands and amps creating a ridiculous level of sound that only gets crazier as two electric beats begin brawling on-screen.

The normal fights, as if that term could possibly apply, carry the same level of raw power and clarity. The brawl with Roxy (Mae Whitman) is loaded with a whip and a giant hammer, the former swirling around the soundfield, the latter pushing air around as it moves. It sounds like an insurmountable task for a sound editor, but it’s pulled off here, a small feat of Hollywood audio design, replicated at home without fault.

Don’t think the mix skimps on the subtle areas either. The stereo channels carry whatever is required of them, dialogue at 17:50 as the camera pans side-to-side carefully moving it into the proper channel. Ambient audio is appropriate to the scene, catching the surrounds at parties, or the outdoor environments (wind, birds, etc.).

Scott Pilgrim may be one of the best single-disc Blu-rays of the year. There are a whopping four commentaries here, a bit overdone, but certainly not shy in terms of information. Director Edgar Wright, co-writer Michael Bacall, and author Brian Lee O’Malley are up first. A technical commentary has Wright joining his director of photography Bill Pope. Two additional tracks split the cast in two between key players and supporting characters, rather unneeded.

A total of 21 deleted scenes run 27-minutes, with an alternate ending in that pile. A great blooper reel falls short of 10-minutes, this followed on the menu by a two-part making-of running 49-minutes. A music featurette totals 17-minutes, a brief three-minute lesson on how to play some of the songs next up. Two sections containing unused footage, including improv and other alternate takes, provide some additional laughs.

The section on pre-production is close to 90-minutes, this segmenting into six sections like pre-vis, audition tapes, and make-up tests. Music videos move into three visual effects breakdowns. A featurette about the audio is interesting, and the dozen video blogs provide nice insight into the production over the course of 46-minutes. Adult Swim shorts used for promotion still have some value, and the clips from the edited TV version are priceless.

A dozen photo galleries, D-Box support, U-Control storyboard comparisons, a running trivia track, BD-Live access, a choice between streaming versions of Tremors or Pitch Black, and… no, that’s actually all of it. Short of some director’s cut, this is as expansive as a disc you could ask for.