Alien 3 is not an audience-friendly film, killing off two major characters from Aliens before the opening scene is through, and dropping the gun-toting, gruff-talking Marines for a bunch of seedy, religious convert criminals.

The film went through a rather disastrous shoot, director David Fincher leaving the project before the editing phase. His influence is felt though, Alien 3 taking on a very gothic, dreary vibe that is quite effective. In fact, it’s probably the closest any of the sequels came to recapturing what made the original such a classic, going back to a single alien, a confined space, and a lack of defenses. In that regard, it works, the sneaky alien (a new design) creeping around the vents picking off prisoners where the script sees it as a convenience. It’s as if the critter knew no one would believe Ripley (Sigourney Weaver) when she tells Andrews (Brian Glover) of its existence, so it swoops down to make a point.

There is no doubt the effect of multiple rewrites, gaps in the shooting, and frustrations come through on screen. The rather redundant finale splits the remaining survivors into different hallways, repetitious P.O.V. shots simulating the speeding creature chasing its victim. The tension dips to nill, the film seeking some intensity instead of fear. It’s a direct contrast to what the sequel has established itself as. It’s odd that once you know what the alien can do, rather disgustingly displayed on screen, it loses some of its intrigue.

There is potential in this idea, if not logic. The facility has no guns, requiring everyone to use their ingenuity to fight off the critter, not just point a weapon. That of course makes little sense, a former prison facility having no means of keeping its prisoners in check, especially one with such a varied base of inmates. Even just getting the alien onto Fury 161 is a challenge, the script choosing to just ignore the issue and move on. It’s for the better, leaving more time for the creature to appear on screen, certainly the most audiences had seen of the beast to date.

The unique design, this edition of H.R. Giger’s design born from an animal (which one depends on the version viewed) is beneficial in creating something different, if not well presented. A mixture of suit work and puppetry are utilized, the puppet undoubtedly convincing on its own, failing miserably when mixed with the live action. The effective suit scares, the monster always popping up behind people, works as intended.

However, obvious special effect or not, the alien doesn’t follow its own rules. It ignores Ripley twice despite a chance to go in for the kill, their connection keeping her alive. Apparently infuriated by her actions later, the critter begins climbing a series of pipes to give chase, Ripley terrified as it catches up to her. She has no reason to fear, and the creature has no reason to go after her. It’s an ending that is as care-free as the audience’s attitude, at that point oblivious to what the film had the potential to become, remembering it only for how lax it ends. 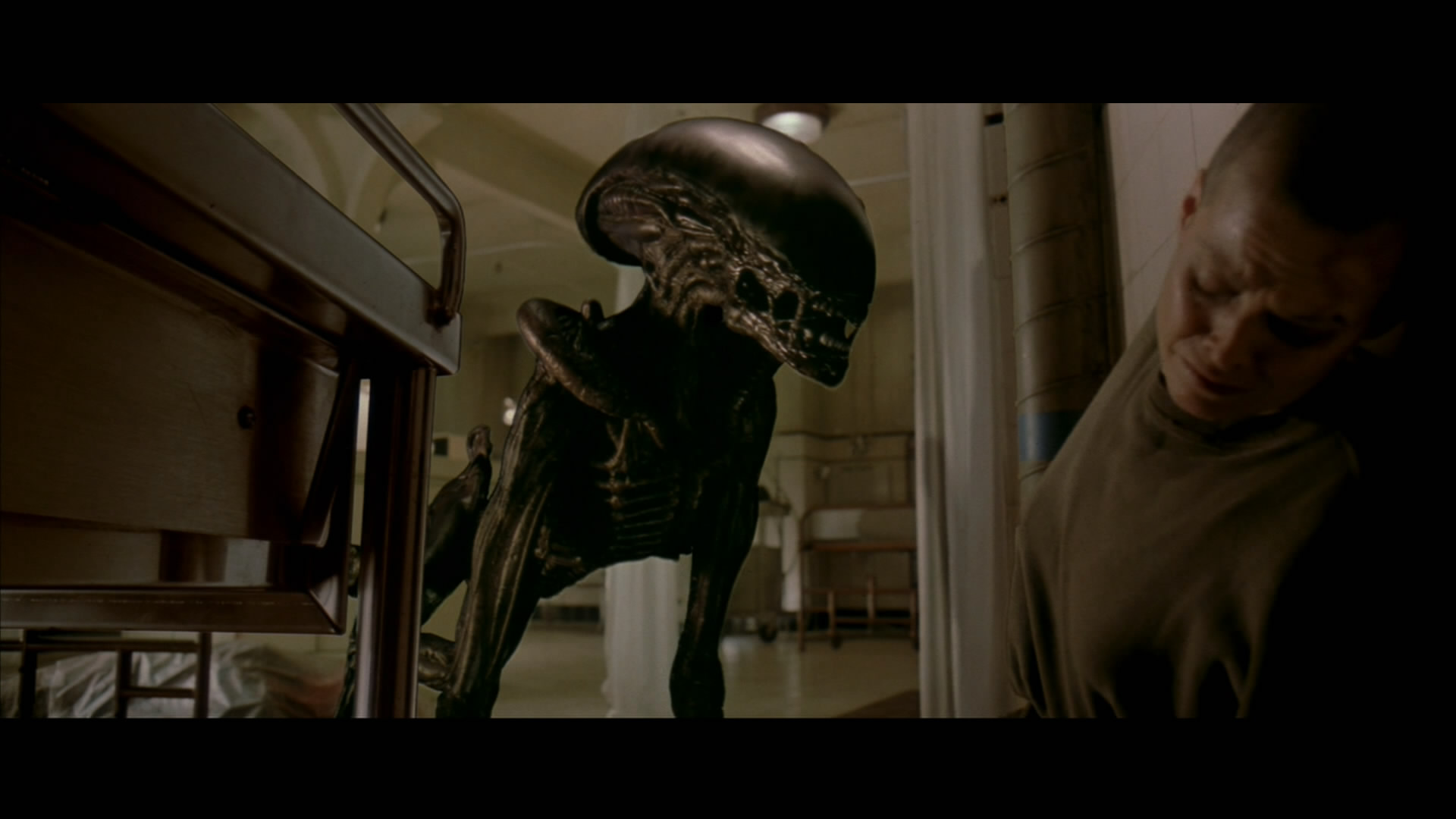 Alien 3 did not receive the same lavish attention in hi-def as the previous two films. This second sequel is generally regarded with disdain, so the financial implications are understood, but not when a studio is asking nearly $90 for the set. Alien 3 certainly deserves better treatment.

This is not some ugly, depressing transfer though. The AVC encode is consistent, resolving a very fine grain structure. It falters only when presented with heavy smoke, at its low point as Ripley visits the pod for a body scan. A camera pan down to the destroyed ship reveals come chroma noise and coarse grain. Care has definitely been taken to ensure this is adequate enough for the material in the least.

The likely cause here is an older master, possibly one prepared a few years ago for cable broadcast, or even the 2003 DVD set, although seven years is a substantial period of time for HD masters. Regardless of where it comes from, the end result is soft, lacking the precision of the prior transfers. Shots of the entire crew, whether on the bridge or during the final furnace speech are lacking in definition and clarity. In close, the transfer does render some adequate detail, facial detail strong in spots, sweat also defined as the heat cranks up. There are moments where this does not hold true, Ripley flat and somewhat smooth at 31:47, an issue cleared up almost immediately as the edit sweeps over to Clemens (Charles Dance), his face as textured as anyone else in the film.

There is dim color palette as work within the movie, the earthy browns and oranges servicing the majority of the scenes. Few are ever given a chance to break free from this specific palette, designed well to keep intact the grim mood and style. This obviously renders flesh tones bleak and somewhat sickly by design. No alterations have taken place here like they had with Scott and Cameron’s films. This is how Alien 3 has always looked.

Black levels are consistent as well, the dearth of lighting producing a loss of shadow detail at times. Nothing here is offensive; the image still looks natural. The worst of the black crush evident as Ripley is first brought into the facility and laid out on the table. The rest is purely intentional to the photography, the fan kill another scene of note, shot in a deep silhouette at a distance, focused lighting in close. With a newer master, Alien 3 could really come alive.

The six years between Aliens and this entry bring with them better fidelity and more precise surround effects. Sound design here is crucial, not just an avenue to features guns firing en masse, but take audiences back to the the atmosphere. As the pod is discovered by the inmates, the howling winds of Fury 161 keep in the rears establishing not only an audio presence, but the harshness of the planet.

Inside, you’ll find a constant echo, the empty rooms and hallways producing dialogue that rarely stays just in the center. Short of the medical bay, almost every scene keeps the surrounds active. Dripping water adds to the environments, leaky pipes rarely letting up. Machinery, like the giant crane that lowers the pod into its cell at 22:30, is effective as it passes front to back. This DTS-HD mix gets just about everything right though, a speaker on the wall actively reproduced in the left front as Andrews barks orders to Clemens who comes through the center.

The final sequences, the alien running around the walls and such, produces the same type of effect. As the walls rush by they generate a “whoosh” effect, captured in the fronts and effectively moving into the rears. Screams can be heard throughout the facility, again with specific placement. The score, this time by Elliot Goldenthal, carries some power too it, although keeping in balance with the other elements. The same type of room-filling surround bleed is evident within the music.

Extras follow the path of the prior discs, including a cast and crew commentary from 2003, minus of course David Fincher. A compressed, isolated score is here, followed by a massive selection of 31 deleted scenes, running just shy of 50-minutes. The MU-TH-UR pop-up mode continues, again the only real purpose being the pop-up trivia track.