Much can be said for the ending of Toy Story 3. It is a perfect cap to this superlative series, the type of finish that brings this tale of lost and forgotten toys full circle. It is filled with emotion, warmth, nostalgia, and happy memories from those who have grown up since the first entry.

Everyone can relate to it, the perfect way to bring audiences into the final moments emotional, yet satisfied and happy. It does not matter how you found the previous adventure. The ending is that cap, an example of how far Pixar has come.

Toy Story 3 loves that nostalgia people already have for this franchise. The opening sequence, an action scene placing Andy’s toys in a battle over some stolen money, contains the original dialogue from the first film. We see inside Andy’s head, a wonderfully imaginative, lively take on what we all did as kids. In our minds, we created those massive play sets we saw in commercials, and this is perfectly realized on screen.

It is funny to think how Andy’s toys have grown with him. They seem to accept that they will no longer be played with, taking it as something that is destined to happen. Woody, Buzz, and the Potato Heads are almost complacent in their fate, generating a bit of guilt in the audience who have also tossed toys away to that dreaded garbage dump.

Slightly jarring, Toy Story 3 opens in a rather barren room, most of the toys already missing. This removes a variety of fan favorites, including Speak ‘n Spell, RC, and Binoculars. These are bit players for sure, but there is an attachment to them after all of these years. While the insertion of a full stock of new characters may be about a cash grab in the merchandising department as much as it about keeping this entry fresh, they work. They carry enjoyable personalities, Mr. Pricklepants (Timothy Dalton) stealing the show as a plush hedgehog who values his still performance when being played with.

Toy Story 3 is certainly more action oriented than previous entries, focusing on numerous chases, escapes, and last minute saves. Maybe it does become a little old, the saga of the heavy-handed ruler of the daycare Lotso (Ned Beatty) not as interesting as these characters reactions to him. Regardless, Toy Story 3 still has the heart and gentle style that make is so accessible to everyone. This is material anyone can relate to, young and old, a series hallmark that this third sequel ensures remains in place. 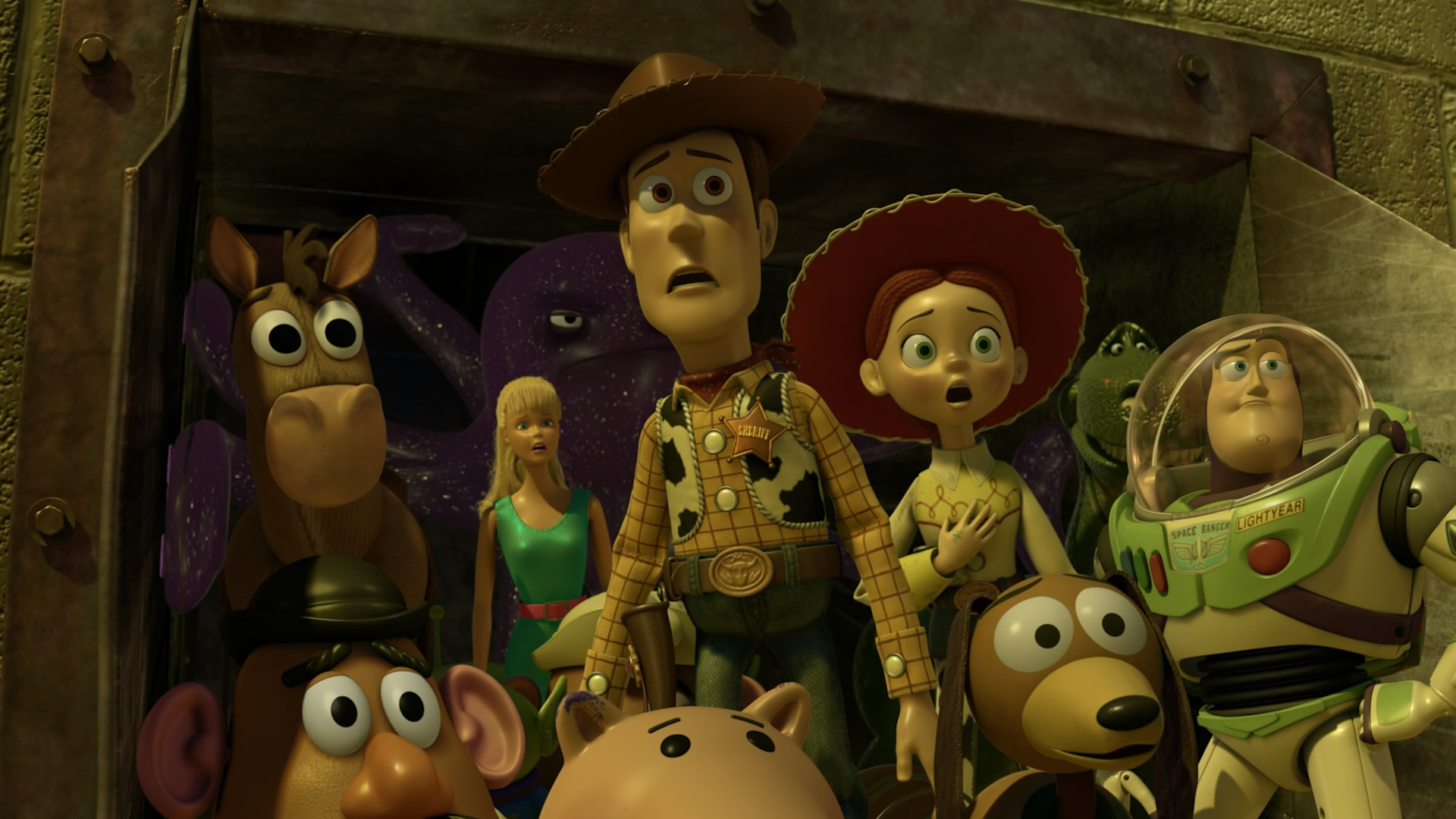 Toy Story 3’s title logo shows aliasing. That’s the extent of the problems here. The previous two films on Blu-ray, released alongside the theatrical release of this trilogy-ender, had their share of aliasing issues, Buzz’s helmet rim a bit bothersome, but not enough to dilute the visuals. That issue has been taken care of in spades, not a single fine line or circular object showing any signs of flicker or aliasing, problems apparently solved.

That leaves this out there as a perfect transfer, one of the best from Disney/Pixar to date. It’s hard to imagine any film containing more color, saturation, or vividness. The first scenes during the daring train rescue showcases an array of desert tones, the hefty browns the backdrop to the colorful Troll hair, train cars, Force-field Dog, giant green Rex… the list is almost endless. Nothing can dilute their beauty, even inside the increasingly grim daycare center, where the lights tend to be set to blue. It all just adds to the intensity as the images pop off the screen.

This is a far more textured film than any Toy Story prior, the coarseness of the Potato Heads, clothing worn by Barbie and Ken, various metals, and crayon marks as the toys are slowly dismantled by the toddlers are all perfectly visible. It doesn’t matter whether it’s a tiny object or a character; the transfer reproduces the source with utter perfection. It’s easier to appreciate the work that went into this effort too. Look at the baby’s name tag at 51:58, the dirt and grime prevalent and impossible to miss. The level of individually rendered objects during the finale inside the furnace is staggering, each fully visible, defined, and crisp well into the depths of the frame.

Black levels are undoubtedly flawless, as if the expectation were any different. There is a staggering level of dimensionality on display here, a perfectly calibrated contrast giving such life to these characters. The resolution is definitely beneficial in this regard too, the individually rendered fur seemingly coming through the screen, whether that concerns Lotso Bear or Buster, the family’s dog. Each scene offers something new to gawk at, and the AVC encode never lets up or falters. This is really impressive during the run through the incinerator, objects passing by with incredible speed (and simulated motion blur) and not an ounce of visible compression to be had even under close scrutiny.

Disney goes all out with a DTS-HD 7.1 mix, this home effort as intense and well constructed as audiophiles could ask for. There is plenty of action to go around, the opening scene loaded with a powerful train engine rocking the subwoofer. An explosion, specifically a bridge, delivers that deep, rich, room-shaking effect that is so rare to hear this cleanly.

Of more grand scale are the surrounds, the precision placement truly one of the most accurate attempts at a real soundfield on the format. Every piece of audio is placed where it should be. It doesn’t matter what it is, be it sound effects, toys scampering about, or dialogue. Listen to how cleanly Bullseye pans around the soundfield during the train rescue at the start. Listen to the natural echo inside the candy machine about 40-minutes in. Be waiting for the mass of garbage being shuffled about, and there’s a lot of it in this movie.

Those extra surrounds really come in handy when establishing clean pans in the rears, and creating a more fulfilling Randy Newman score. The wrap-around effect is really astonishing, the very definition of “immersion.” The escape from the dump is phenomenal, the roars of the flame nothing short of uncompressed audio perfection, while the various elements remain in balance. Dialogue always overcomes the extensive surround effects, and it doesn’t matter where it happens to be placed.

The single disc edition this review is based on carries few extras. The short Day and Night is up first, the usual Pixar quality upheld. Buzz Lightyear’s Mission Log tackles the International Space Station while educating the young ones. Toys! is a short six-minute look at the amount of work that went into creating the characters. Some trailers are here too, including the sneak peek at Cars 2.

Note: DoBlu will have a full review (with video) of the Toy Story Trilogy collection later in the week. We will then revisit this disc and the second disc of extras, score surely changing accordingly.