There can never be a shortage of dinosaur documentaries, the constant flow of new information enough to fuel filmmakers until the final species is uncovered… and then more are found. As a kid, it was Digging up Dinosaurs, in high school Walking with Dinosaurs, and now it’s IMAX’s crack at it with Dinosaurs Alive.

Michael Douglas narrates this 40-minute piece, focused mainly on the discovery of the creatures now as opposed to the merely tolerable CGI critters. Shots of the Gobi desert and New Mexico locales are impressive, the sprawling aerial photography setting a grand stage along with scale.

People certainly sit down to Dinosaurs Alive to see dinosaurs and see them… they won’t. Much of the film sits in the modern day, paleontologists digging through the rocks and the sand to find bones, while a spinning CG dino model briefly details their find. Occasionally, you’ll see some action, an Oviraptor protecting their eggs, or a T-Rex descendant hunting for a kill.

These scenes are brief, surely made for the 3D effects more than anything. A few of the modern scenes go for the gusto in terms of “shocking” 3D effects, a grad student tossing a hunk of dirt at the camera for example.

Douglas’ narration is fine, although probably not enough to keep the young ones in their seats while they become anxious for the main attraction. Dinosaurs Alive came out in 2007, the CG rather stiff then, now even more of a disappointing stand-out, but an effective chase scene through a jungle environment is a lot of fun (dripping with energy if nothing else), and kids probably won’t care anyway. Besides, it’s only 40-minutes and you’ll probably learn something. 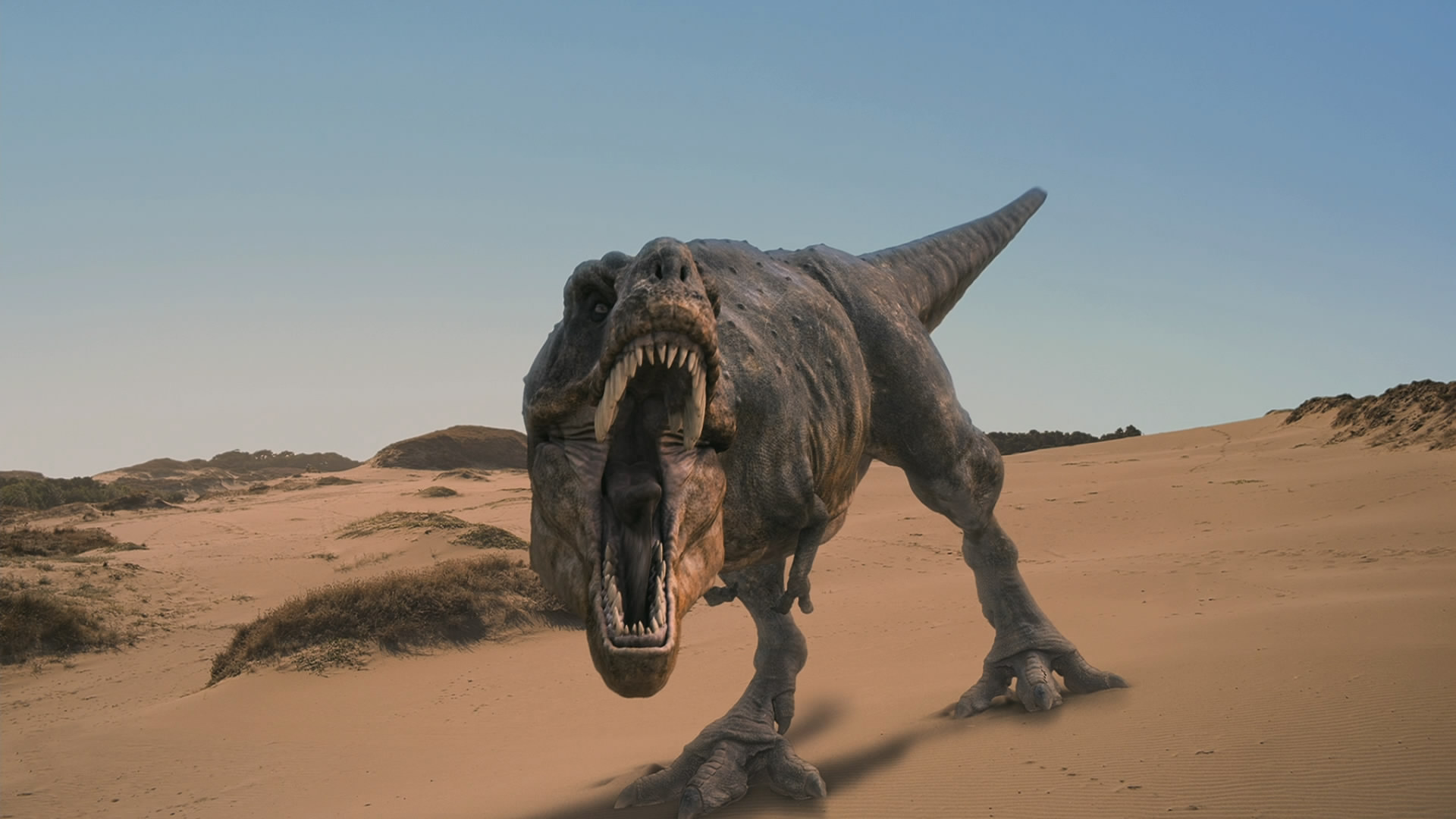 Note: This disc contains both 2D and 3D versions of the film. DoBlu is not equipped with 3D-ready tech, so this review only concerns the 2D edition.

IMAX is a 65 mm film format, absolutely staggering on the big screen in terms of detail. In terms of Blu-ray, the downgrade in afforded resolution is not so kind. Some of the aerials or panoramas of the desert environments show some distinct halos on the horizon, while the CG dinosaurs stick out drastically. Their finer details, at a distance especially, flicker and drop in and out. The relative of the Anklyosaurus is definitely the worst offender.

At times, this one looks awfully smooth, human skin appearing more digital than film-like. Shots involving grass or other foliage suffer many of the same problems, the down-conversion causing a lack of definition, and more of a struggle to keep up with the heightened source. That said, the views themselves are stunning, the number of aerial shots still remarkable for their bold color. The red sands could never be downplayed short of the worst technical disaster ever in the transfer process.

Of far bigger concern is the compression. Banding is a constant struggle, looking towards the sky around 10-minutes in producing one of the first (of many) examples. Since the black levels are quite weak, not only is depth diminished, but compression becomes evident here as well. Shots of the dinosaur bones strung up in the museum settings are riddled with banding as the light passes over, the only benefit being some distinct texture on the bones themselves.

One final concern is a rather high amount of print damage, and the conditions of the shoot are well understood. The myriad of scratches, specks, and other imperfections, likely happening not longer after the footage was taken. A little clean-up surely wouldn’t have hurt though, and no doubt the immersion of 3D ruined a bit when a black scratch pops-up on the screen, however brief.

Of note for the Dinosaurs Alive DTS-HD mix is the score. It is loud, forceful, full, and features a terrific bleed into the surrounds. It carries fantastic range and clarity, remaining dim during dialogue-driven sequences and coming alive when it’s designed too.

Michael Douglas’ narration is crisp and tight, sounding natural. The other paleontologists are where the concern lies, their dialogue obviously dubbed over, a drawback of the loud IMAX cameras resulting in this becoming a necessity. Not only are their words quiet, but flat.

Aside from the score, the surrounds are generally dead, save for a few spurts of action. The chase sequence at 31:50 has some rustling leaves and the patter of small dinosaur feet scampering about the soundfield effectively. The majority of the time, the dinosaurs remain in front of the viewer, and as such, the sound design does too. A smidgen of bass adds some heft to the larger roars.

To make up for their rather short length, IMAX discs usually come with some great making-ofs, this one no exception. The 27-minute piece focuses on the conditions of the shoot, the film stock, and the hulking brute of a camera used to shoot this piece. Meet the Creatures is an educational piece on each of the dinos featured, including clips and text. Trailers and BD-Live access is included, although the latter has yet to to go live at the time of this review.