Animation is about flow, creating motion through drawings and presenting them on-screen as believable images. The best, typically from Disney of course, does this in a manner that astounds, animated people becoming lifelike and carrying emotion.

The other part of it is color, splendidly vivid color, which is what Beauty and the Beast provides… from the opening frames. The opening shots of a masterful backdrop painting of what will become the Beast’s castle is a stunner, loaded with such rich hues that few Disney images can compare. It zooms into some stained glass windows, setting up this grand fairy tale, those equally beautiful, and not an ounce of animation has appeared on screen.

Beauty and the Beast didn’t enter the Hollywood hall of fame as the first animated feature to be nominated for Best Picture for its story. It’s been told, been done, and no one going into it is surprised. Between its music, additional characters, and (ironically) its true beauty, the Academy took notice, giving the film its proper due.

Disney’s last true traditional animation gasp of the ’90s began here, followed by the equally vibrant Aladdin a year later. Beast contains the same level of care, creativity, and liveliness that are hallmarks of what Disney was founded on. Aside from a computer generated ballroom, now a landmark, mistaking Beauty and the Beast as a piece from the company’s classic line is easy to do. It’s such a travesty this style came to an end, pushed away by fancier, 3D effects that lack this same personal touch.

The interpretation of this story, with its colorful sidekicks, critically nails the Beast: His emotions, his struggle, and his hatred of everything human. However, it is that softer side that needs to be prevalent and understood, his transformation into a caring, kind creature progressing naturally. Darkness begins to evaporate from the frame as Belle moves into his life, the color becomes stronger, and entire project takes on that same, enchanting feel. That’s why color is so imperative in animation, and choosing the wrong shade, whether too dark or too light, can break a project. Beauty and the Beast finds that perfect balance. 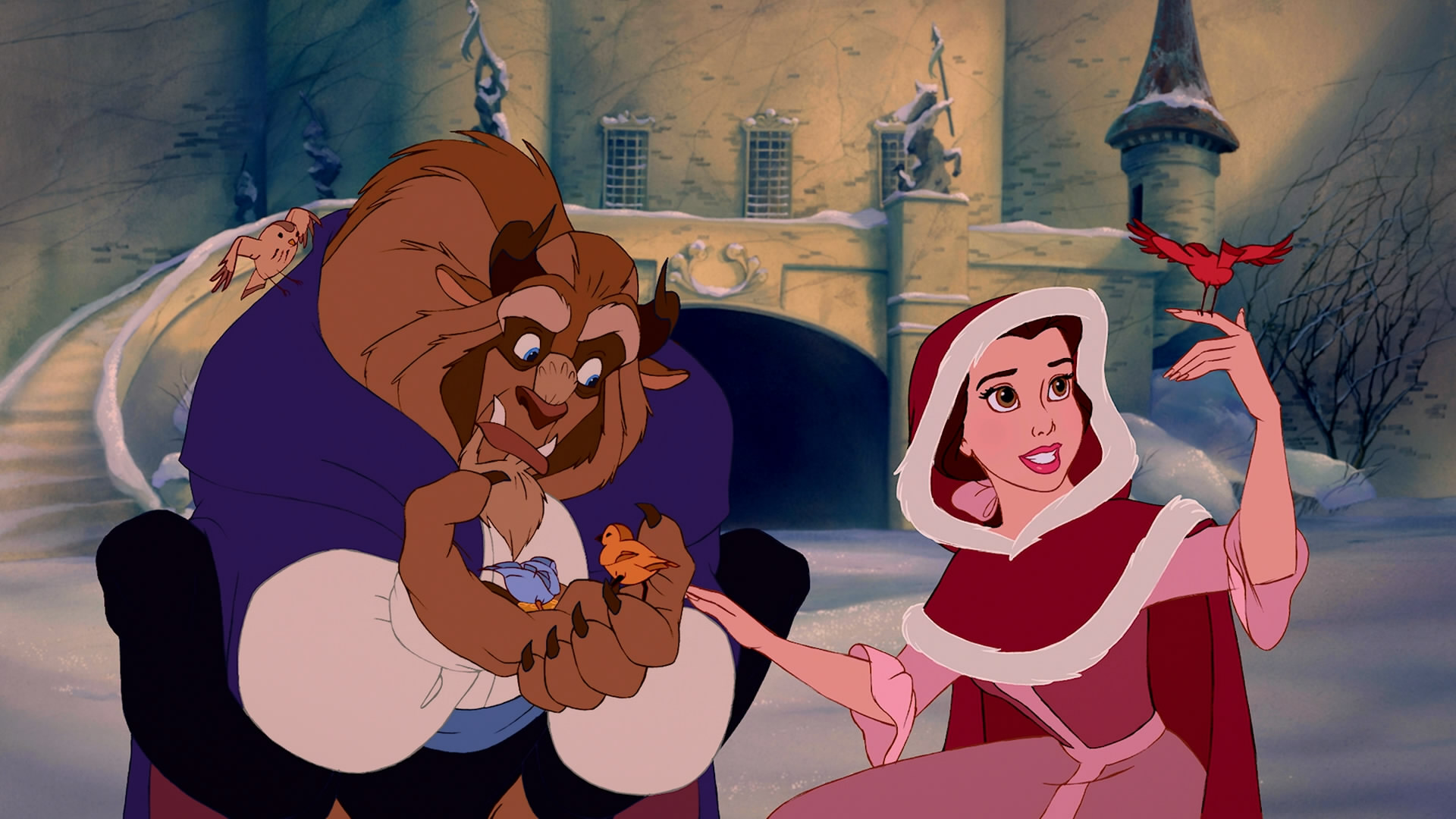 Disney releases another dazzling Blu-ray, this given the Diamond Edition treatment which has built a flawless reputation to date. No surprise, this continues that growing tradition. Immediately striking is the color, now seemingly subdued on the previous DVD editions, given new life the instant images start appearing on screen. Saturation is truly mesmerizing in these opening moments, the painted stained glass windows beginning this story with more life than ever before.

Once Belle begins her journey through the town, the color continues to amaze while the sharpness kicks into high gear. Every line is brilliantly defined, crisp enough to make pencil strokes and any painting errors completely visible. It’s as pure as animation can be. Some fine, straight lines do show a hint of aliasing, although so minor most will not notice.

Compression, which always hampered animation on DVD, is no problem here. Mosquito noise is removed, and those blocks of vivid color are flawless in their cleanliness. Color gradients are perfectly preserved with no distinct banding. No ringing issues are noted, and the image is grain-free, about the only the time the community will accept the idea of grain removal. Every frame looks like an animation cell, their purity now preserved in this fantastic format.

Black levels are wonderful. The Beast first appears in silhouette as he approaches Belle’s father, a full, rich black scale showcases how deep this disc can go. Dark corners of the castle, suiting those moments as the Beast appears down and out, carry no black crush to speak of, every stroke of those backdrops visible while maintaining depth. This is an image with no flaws, a showcase just like Disney’s other animated classics have been, raising the bar yet again for how much life these films have left.

Even under the gun with technological change, Disney ups the 3D ante too. Animation could be simple. The characters stick out from the backgrounds while a handful of foreground objects sell the depth. Disney does not do that. In fact, they bravely push the front of the frame tight, really extending the dimensionality. Most impressively, the animated characters are not flat. The Beasts’ head is layered to better pronounce his snout from his neck. Gaston’s chin will peer out with his nose, and Belle’s dress will appear rounded and full.

The same thing happens to backgrounds. Trees are no longer flat paintings. Their leaves are sectioned off at color separations to bring them forward without dampening the art. The first song as Belle wanders through town makes windows appear inset and ledges deep. Characters taking up a line will fall far into the frame for flawless dimensionality. Musical numbers, especially “Be Our Guest,” have never carried this much vibrancy. Of course, the ballroom is stupendous too, with a chandelier that becomes placed right into your theater. This is a must for any 3D-capable set-up.

A DTS-HD 7.1 mix exists to present that Oscar winning score in its fullest possible fidelity. The fullness of those musical interludes is unparalleled, seeping into the soundfield naturally, creating the feel of a full orchestra in a concert hall. Songs accompanied by lyrics containing tightly wound, crisply defined words, pushed firmly into the center where they belong as the rest of it pushes out of those stereo channels with wonderful force.

The extra surrounds of course create a fuller surround presence, although its necessity could be debated. They are used frequently though, again the score deserving mention for its bleed into those channels.

Action scenes split the stereo channels well, as does the movement during the songs. “Be Our Guest” slips various effects into the sides naturally, as if they were always there. Characters are pushed out of the way into the proper channel, the Beast’s fight with the wolves certainly a highlight.

There, wolves come in from all angles, whether that is side to side or front to back. The whole sequence is as aggressive as they come in terms of directionality, the bass lacking although producing a natural balance. The film doesn’t necessarily require a throbbing subwoofer, although certain moments such as the Beast’s frustration over Belle refusing to come to dinner certainly could have benefited from some ferocity and a scare for the little ones. It could do them some good once in a while.

To be clear, the menu system for this Blu-ray debut is an absolute disgrace. It’s confusing, scattered, and a pain to navigate. The features are spread across two discs, yet all of the features are listed in the menus on both discs. Selecting something not on disc 1 while on disc 2 tells you to insert the proper disc. Here’s a radical idea: How about just listing what you can watch on the disc currently in the player? Is that too much to ask?

There are three versions of the film included here according to the packaging, the original theatrical cut, an extended version with a new song, and a third… that doesn’t seem to exist. Maybe it’s buried somewhere else or maybe it’s supposed to be the picture-in-picture version that includes the storyboards along with the theatrical version?

A commentary is situated over the extended cut, including producer Don Hahn and co-directors Kirk Wise and Gary Trousdale. You can engage in some karaoke too with a text-based sing-along track, also with the extended cut.

Beyond Beauty runs nearly 160-minutes detailing the film’s creation, plus features additional content while you watch. There is a menu you can access to see what you’ve already viewed, an actually helpful feature. This is the best part of the disc. Composing a Classic tells the story of how the music was created, while Broadway Beginnings looks at that adaptation. A selection of deleted scenes running 28-minutes are followed by all of the DVD features, another hours worth of content spread across eight sections. Some games for the kids, BD-Live access, and a music video are left… maybe.

Update: As spotted by some users, an “advertisement” of sorts pops-up during the end credits to tell you about a random feature on the disc (or the second disc). It seems to disable if you hit pop-up menu earlier, or if you rewind. There is no off button per se, and you’re forced to see it, which is pretty absurd. Is there any need for this?