Discussion of King Kong’s revolutionary visual effects generally track back to Willis OBrien’s stop motion effects, and they should. They sparked an era of incredible animation that lasted well into the 1990s when computer graphics began to take their hold on movie audiences.

There are two unsung heroes of King Kong though, Mario Larrinaga and Byron Crabbe, credited with creating the simply stunning, depth-filled backdrops that added such dimensionality to the jungle scenes of the film. They’re not simply used to showcase Kong, but extend the set and produce scale for the human actors. They are seamless images, set in front of the camera one after another, avoiding expensive physical set-ups, while still becoming the believable backdrop to one of Hollywood’s grandest adventures.

There are many elements of Kong, the backdrops simply part of it. Max Steiner’s score may be one of the purest and perfect ever produced, full of heavy horns and clashing cymbals further adding to the raw power of the giant gorilla and his cohorts on Skull Island. It’s in sync too, The heavy footsteps of the Native Chief (Noble Johnson) given added impact as the score thuds with each step.

Kong is a film of excitement and adventure, some seeing it as a fictional biography of Merian C. Cooper, his own energetic enthusiasm leading him on a eclectic life of risky situations. Kong himself is the greatest thrill, a creature untamed and nothing but raw strength, the ultimate trophy.

If time has done anything to Kong, it’s not dated it or cheapened it, but made it easier to appreciate the startling level of achievement on display. Once the island comes into view, the first matte painting of the infamous wall, later burned down in Gone With the Wind, sets a tremendous level of craftsmanship and talent that carries through the rest of the film.

Hardly a moment goes by without something happening, the pacing truly the spectacle, few films ever reaching this level of non-stop action without pausing for a break. It’s not hard to see now what audiences did in 1933, and even in the re-release back in 1952, the terror and the heartbreak of the iconic finale still just as palpable. 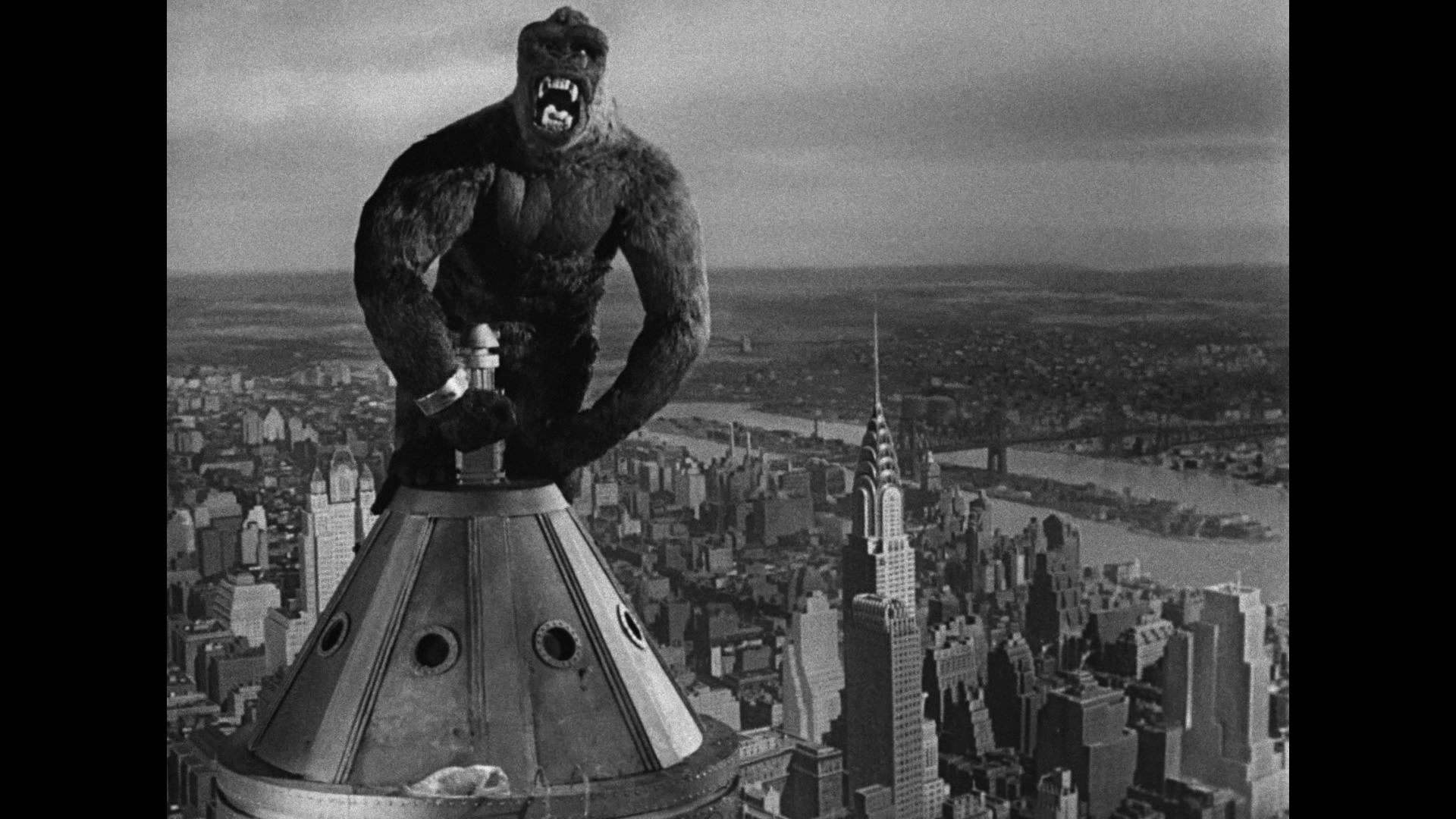 Warner brings King Kong to Blu-ray in a deeper, richer transfer than the 2005 DVD edition. Contrast has certainly been tweaked, black levels now truly black, not simply a shade of gray. Whites are brighter, and detail is no worse for the wear. The gray scale seems perfect, completely natural and balancing all of the visual elements flawlessly.

Surprisingly, with all of the multi-printed visual effect shots, they are not worse for the wear. They end up being some of the cleanest views, the enormously detailed paintings being presented with all of their detail intact. The rocks inside Kong’s cave dwelling are visible, their craggy structure easily appreciated. This VC-1 encode has few problems resolving the hefty grain structure and the tiniest painted plant life. Damage has all but been completely eliminated, the worst of it visible during fades and transitions, the right of the side of the screen occasionally producing some lines or flicker, the latter of which is fully controlled for the duration otherwise. Judder is a non-issue too, the transfer stable. The only movement comes from the jumpy effect shots, the worst in New York prior to the train assault.

The transfer struggles with fog or smoke. Some of the worst shots are during the intro to Skull Island (25:10), the ship engulfed with a mist, and the grain breaking down into artifacting. The same goes for the raft sequence later, people seemingly swallowed in a screen awash with very digital noise. Close ups of Fay Wray typically employ a filter by design, the diffused lighting thankfully causing no such issues.

Sharpness is impressive, probably this transfers best quality. Jack Driscoll (Bruce Cabot) wears a thinly striped shirt, that pattern now visible at 18:52. It’s not in clear view, but it is there, which is more than can be said for any previous home video edition, VHS, Laserdisc, and DVD included. Detail on the full size Kong face prop is remarkable, utilized during his first appearance to Ann, and repeated (with even better texture) during the native village attack (1:22:03). Make-up effects on the Native Chief are now visible; not just the war paint, but some type of mask-like effect. That was impossible to see clearly before. The iconic wall looks better than ever, the wood grain, straw, and rusting nails now in full view.

Model Kong, whether involved in a multi-pass effects shot or not, produces thinly defined fur and ridges on his face. Many of the best shots occur during the Empire State Building assault, zooms on the model making it easy to appreciate the work that went into its creation. Even the seams where the covering was sealed can be made out. King Kong will never be a showcase film for hi-def, but it is a showcase for the ability of restoration teams to give these films new life.

Warner presents the audio in its purest form possible, a wonderful DTS-HD mono mix. To be clear, it is rough. Drums have little power and remain heavily distorted. Cymbals seems lost in the mix. Horns lack clarity and precision.

That said, with the lack of digital compression, the music can finally breathe naturally. It is fuller and richer than it was previously, each element of the score now distinct, even if not very clear in terms of fidelity. There is no noise, no hissing, and no popping evident in this score, all anomalies eliminated for the purest possible presentation. At its peak, with all of the elements working together like Fay Wray’s unforgettable screams, Kong’s roar, and civilians screaming in New York, Max Steiner’s work is still a powerhouse.

Dialogue, while suffering the same, somewhat scratchy fate as the music, is a bit elevated. Smaller lines from the unspecified crew members are distinct now, the random chatter after the discovery of the stegosaurus now easily heard. Denham’s speech about becoming rich after knocking out Kong is cleaner and fuller, certainly adding to the moment. The importance to Kong is the score, and it is marvelously presented here.

With the exception of some additional trailers for other Merian C. Cooper films, the extras are ported over from the 2005 DVD intact. To make up for the lost trailers, Warner has given King Kong the DigiBook treatment, the disc housed on a plastic holder behind a 32-page book, the information contained within fine for a Kong newcomer. There’s nothing new for veterans, although then again there’s not much left to find either.

A commentary is hosted by Ray Harryhausen and Ken Ralston, with excerpts taken from interviews with Fay Wray and Merian C. Cooper. RKO Production 601 may be one of the longest documentaries ever produced on a single film, running over two and a half hours. This is an exhaustive (obviously) look at the intriguing backstory of the film, and it’s resounding success. They don’t get much better.

I’m King Kong is a nearly hour look at Merian C. Cooper’s life, this followed by a modern recreation of the lost spider pit sequence, all done with traditional effects. A selection of test footage from a canceled Cooper project called Creation is here, set to a commentary by Harryhausen. A trailer for the 1950s re-release is the final extra.