It’s bad enough when you are forced to sit through multiple trailers, a few commercials, still ads, and additional in-movie advertising at the theater. At home, unskippable trailers, various FBI warnings believing you are a pirate, and menu ads push merchandise in your face too. Now, Iron Man 2 brings us the next level of movie marketing, where the plot of the film now becomes an advertisement.

See, Iron Man (Robert Downey Jr.) will eventually join the Avengers in that superhero cross-over film whenever that happens. We know this because if you stayed after the end credits of the original Iron Man, Samuel L. Jackson made an appearance as Nick Fury. Now, in this sequel, he becomes one of a plethora of characters, many underdeveloped, purely to sell the idea of the follow-up.

That is irritating, but the smooth-talking, witty Downey salvages any material, even when the film becomes a bit sluggish. It does not use its time well for sure, inserting characters like Happy Hogan (Jon Favreau) who just sort of exist. Does he have a purpose? Two villains, three heroes, two leading ladies, and countless robots later, we have a sequel and the answer.

To its credit, Iron Man 2 does loosely fit the Avengers story arc into the plot, and in the process, developing the character of Tony Stark however slightly. The focus is on a new villain though, a Russian physicist Ivan Vanko (Mickey Rourke) who may be fluent in his native tongue, but his accent kills his English dialect. Apparently invulnerable, even when being smashed repeatedly into a brick wall by a car, Vanko’s eventual final battle is far too brief.

In fact, Vanko seems like a secondary villain considering the finale. A robot army begins assault a technology expo hosted by Stark, and off we go into a familiar land of killer robots blowing things up. The whiz-bang, “what did I just see” editing becomes a bit much, but at least the explosion of an entire parking lot is kept in frame for all to enjoy.

Keeping the idea and concept fresh is tough. Iron Man 2 explains the upgraded look with an actual story background, that of Stark’s older power source beginning to fail him. It allows the effects crew to work their magic, and help the character in his battle of good versus evil, because that’s just what these guys do.

Iron Man 2 is not as funny, creative, or as witty as its predecessor, yet it does quite a few things right. No one will fault it for being short on content, that much is for sure. Oh, and if you stick around after the credits, you get another advertisement. Joy. 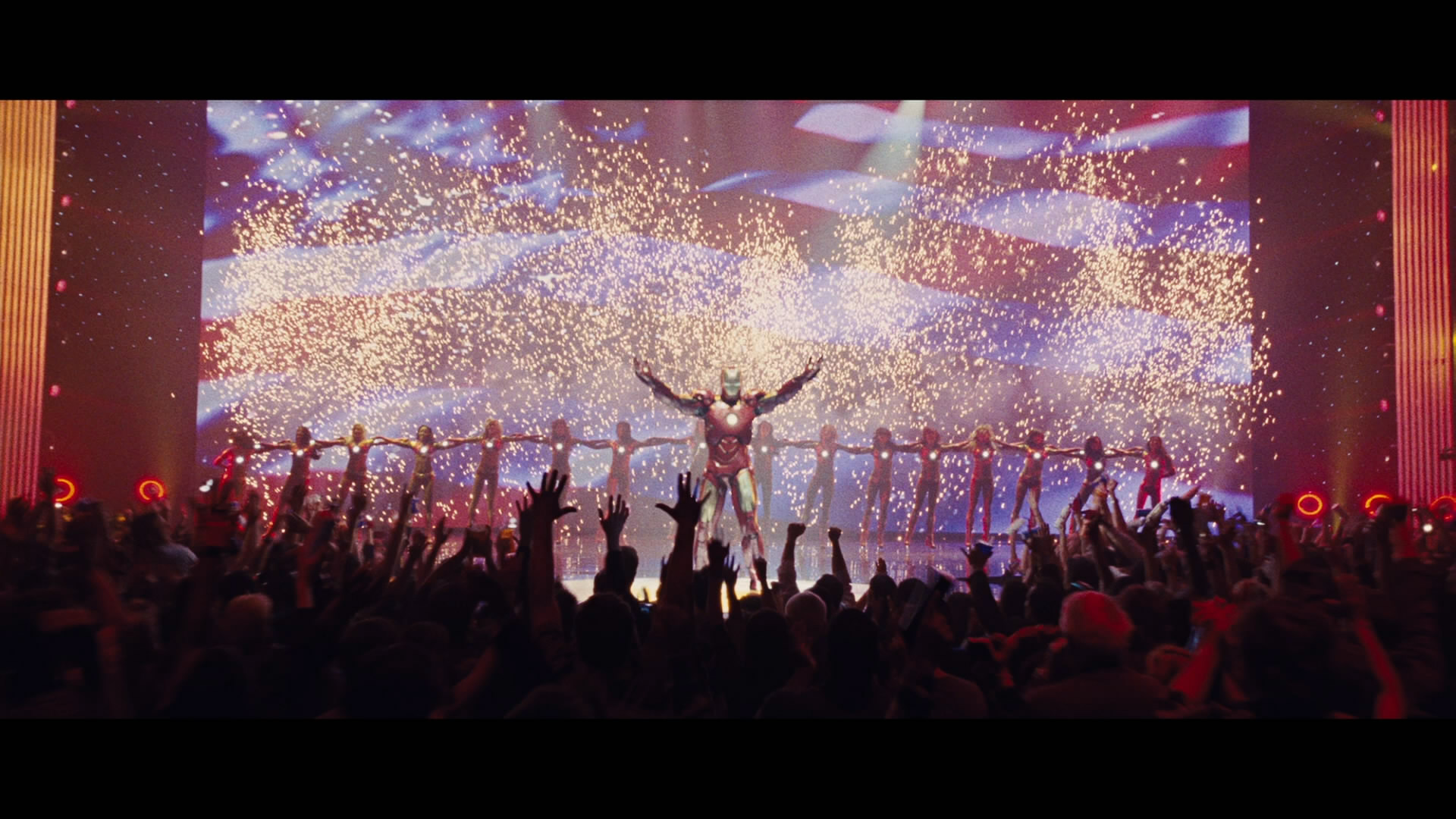 Sharpness is the initial highlight of this AVC encode, even if it doesn’t always lead to much. Establishing views, from Monaco at 26:07 to the Stark Expo that kicks off the film are wonderfully rendered. The level of crisp, discernible detail is staggering, from bricks, to trees, to the people. In fact, this may be the first disc to ever perform better in the long and mid-range than in close.

It’s hard to figure out why close-ups are so barren. There are some, sure. Mickey Rourke has a deeply textured face, visible at 45:53 amongst others. Like everyone else though, that high fidelity detail likes to fluctuate, the black levels making that same actor appear murky, flat, and dull at 39:10. Depth is not always consistent, the deepest, richest blacks taking hold at the congressional hearing at 11:37, lasting throughout the scene. The colors are boosted here too, even during a switch between film and digital, keeping some of the deepest blues alive on screen.

All of the action, explosions, and flying mech-suits look fine, the digital effects holding under deep scrutiny. The Monaco brawl, taking place in broad daylight, leads to some exquisitely rendered views of the Iron Man suit, those quick cuts to Stark firing the hand cannons making the added detail easy to appreciate. There are tons of sparks being strewn about, creating some vivid eye candy, and again, it’s always when the camera sits far.

A full resolved grain structure is appealing, and despite the stream of effects, noise is a non-issue. All of Tony Stark’s virtual computer programs, floating in the air, are precisely resolved by this transfer, paying off as he checks for information. It’s utterly bizarre then that the close-ups are so mediocre, even when the camera is right up against Don Cheadle and Robert Downey Jr. inside their respective suits during the finale. It’s such a sticking point when entire crowds can be fully resolved into the nose bleed seats, yet a bit of facial detail seems out of reach.

This one starts off blazing, Iron Man dropping from a cargo plane into the Stark Expo, his engines producing a supreme level of bass as they engage, the fireworks off in the background doing much the same. The split stereos track the flying suit as it passes side to side while the virtual camera tries to keep up, the whole effect convincing, smooth, and clean.

Bass is certainly the highlight here, not a single engine fired, arm blaster shot, or explosion unaccounted for in the low-end. It’s tightly wound, deep, and impossible to miss. At times, it seems to be too much, overwhelming the sound field with a tremendous jolt from the sub, while ignoring much else. It can be hard to identify the aggressive surround work when the room is rattling at this level.

The balance is off in other ways too, the finale in particular containing a score, but good luck finding it. It’s buried behind the mass of explosions, whiz-bang surround tracking, and bullets being fired off with reckless abandon. Gunfire is wonderfully crisp, and it’s impressive that even the dialogue is mixed enough to be heard over this mayhem, but the impact seems to be lacking when the score almost seems scared to come through the stereos, let alone bleed into the surrounds.

There are a lot of little touches, that multi-million dollar sound design paying off in other ways despite the balancing problems. Crowded areas, like the Stark Expo and Tony’s birthday party, are loaded with ambiance, screaming fans in the opening clearly placed in specific channels. The Monaco Grand Prix is another highlight, the cars clearly speeding through the sound field with an accurate tracking effect.

Iron Man comes in a two-disc set, the first housing a director Jon Favreau commentary, and a pop-up feature (also stand-alone) detailing the weapons of S.H.I.E.L.D. as they appear on screen during the film. You can also access a BD-Live trivia challenge from here.

The second disc houses the good stuff, beginning with Ultimate Iron Man, a fine 90-minute making-of, a bit glossy but certainly detailed. Six featurettes discuss the comics (The Avengers only) and visual effects. In total, it’s another 30-minutes worth of content.

Eight deleted scenes include an optional Favreau commentary, and an alternate opening is here too. Galleries, a series trailers (mostly Marvel stuff), and a music video remain.