The world wouldn’t function without lying. Sure, Invention of Lying shows a modern world much like our own, filled with cars, tall buildings, and people, but it’s hard to imagine most of that stuff existing without lies. How would business deals go through? How can you make a film about anything other than known history? How do you sell products? Better yet, how do you date?

It’s one of the more interesting aspects of this little social experiment, the first date between Anna (Jennifer Garner) and Mark (Ricky Gervais) going terribly wrong from the start in a world where everyone speaks their mind and can’t sugar coat anything. What’s odd is how everyone seems used to put downs and slaps to the face; it’s normal routine in life.

You can think of Invention of Lying like an opposite Liar Liar, that Jim Carrey comedy putting the actor on screen as the only man on the planet who can’t lie, while Invention switches that up as Gervais is the only one who can. The film sidesteps any reason why he can suddenly make things up, a quick visual effects shot of his brain being incorrectly wired apparently the only thing we need, and that’s fine.

Mark has fun with his new found ability, toying with friends, making an incredible amount of money simply by asking the bank for it, and using it for some “romantic” purposes, but deep down, he’s a nice guy. He helps the homeless, doesn’t really do anything wrong, and just tries to woo the girl.

The familiarity of it all is a downer, the relationship the only real sense of plotting here, and it’s as predictable as it comes. Invention is a risk-taker though, and it deserves credit for that. Because he can, Mark creates religion… all of it. Prior to his worldwide announcement about the Man in the Sky, no one had any concept of what death might be, or any type of creator. It even dilutes the concept of the 10 Commandments, slapping them on pizza boxes, also a shameless corporate plug.

There’s a lot of ideas and concepts in Invention, even if that pesky story keeps getting in the way of them. Sure, there needs to be something to keep this all together, but that idea tends to end up lost for the generic nature of the romance, which even despite the lack of lies isn’t particularly interesting, just repetitious. There’s enough going for it, boatloads of cameos included, that keep a light spark alive until the end. 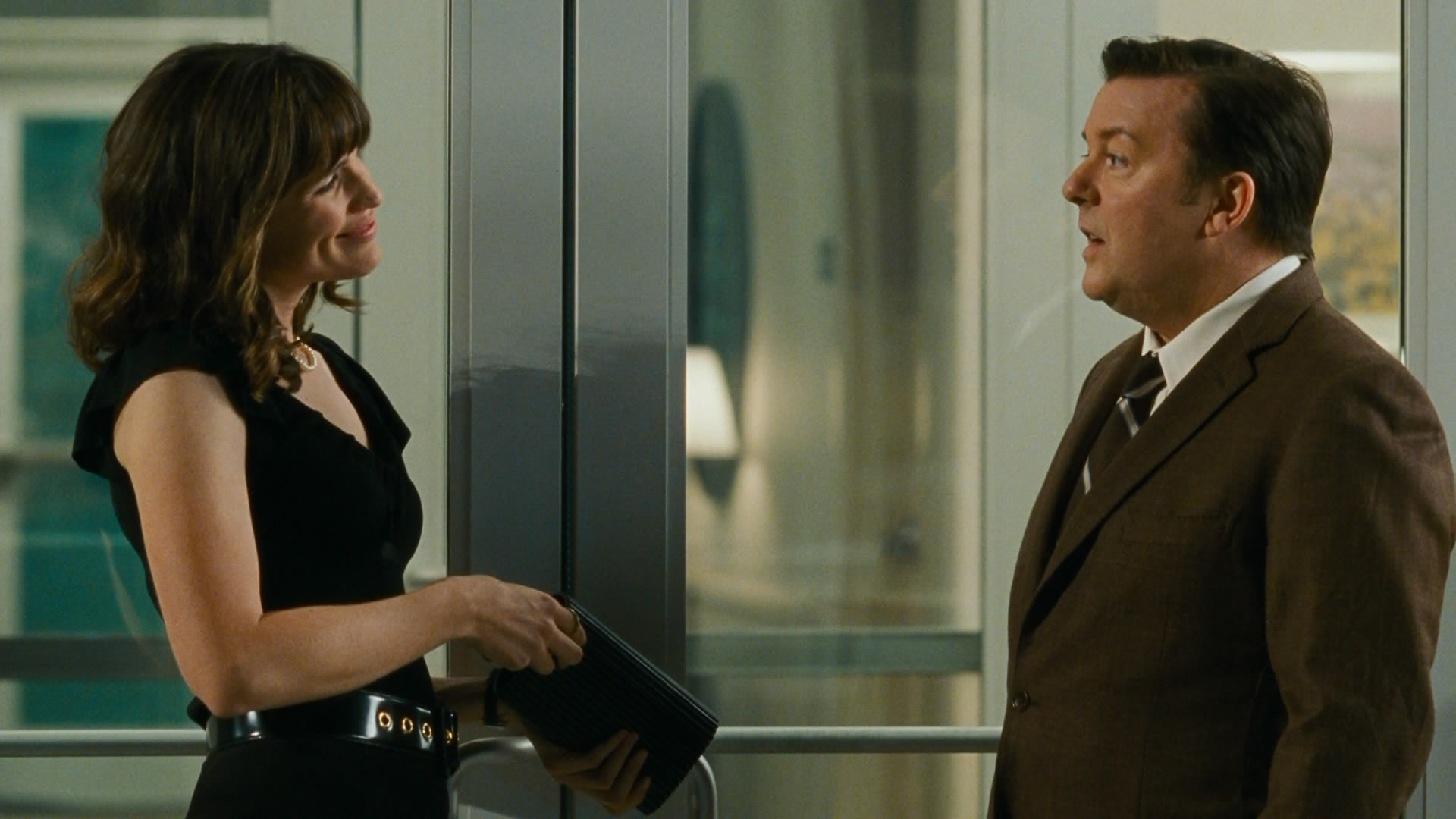 Warner issues the film to hi-def with a VC-1 encode, as compressed as ever too. It’s immediately apparent on all of the solid, manilla colored walls of the apartment that this encode is struggling to keep up with what looks like a pretty standard grain structure. Motion tends to produce obvious artifacts too, and some mild grain spikes completely destroy this one.

In the scheme of things, it’s generally tolerable. Close-ups resolve a general level of fine detail, Gervais having a rather textured face to begin with. Other characters, including Tina Fey’s secretary at 12:34 are indistinct and somewhat flat in terms of their presentable detail. Jennifer Garner, despite a myriad of close-ups, never reveals much of anything in terms of high-fidelity detail, and that goes for facial or clothing textures. You can forget about the mid-range with its quite digital appearance. Even with the noisy grain, at least close-ups look somewhat like film.

On a basic level, the transfer is pleasing. The opening shots of the city are crisp, clear, and almost certainly done digitally. The compression doesn’t do much here (a flashback at 43:18 with Stephen Merchant was also done digitally), leaving the image a bit too smooth, although that’s just digital filmmaking sometimes.

Black levels are typically rich, producing fine, deep shadows, certainly creating a sense of dimensionality to the environments and many mid-range views. Contrast remains bright, aiding the slightly elevated primaries with some pleasant saturation. It’s all standard fare for a comedy these days.

Warner delivers a TrueHD mix, a fine effort, although a bit quiet in terms of general volume. This one needs a bit of a pick-me-up to get started. Once going, you’ll find the dialogue is rendered perfectly, precise and free of any problems. Welcome to modern audio design.

Ambiance is a bit of a premium, street-level scenes never really coming alive with sounds of traffic or chatter of the public. The fronts handle most of the heavy lifting, if you call it that.

It’s almost until the end that the mix really kicks in, a great church organ at 1:27:30 producing an awesome low-end that is so natural and smooth, the old stand-by of, “It sounds like you’re there” actually does qualify. There’s a brief moment earlier where Gervais’ brain gets re-wired, generating a glimpse of surround use and another jolt of bass. It’s all center-loaded from there.

The Dawn of Lying begins the extras, actually a deleted scene turned into a small short about the first human lie back in the days of the caveman. Meet Karl Pilkington is a small featurette about Gervais’ co-host becoming an extra in Boston during the shoot. A Truly Honest Making-of is general fluff, with some fun footage from the set. Four video podcasts total about 10-minutes, followed by a nice set of outtakes for five minutes.