Mars Attacks is crowded. The laundry list of A-list actors is mammoth, ranging from major stars like Jack Nicholson to “hey I remember that guy!” types such as Martin Short. It was even a small launching pad for some like Natalie Portman.

It’s not a crowded movie because it can be, but because it needs to be. The film’s final half hour is so full of death and destruction, the people being wiped out with such reckless abandon need some connection with the audience, even if it’s more of a walk-on role. It’s important to know who was attached to those Christmas-colored skeletons once they hit they ground.

As a send-up of ’50s sci-fi, Tim Burton gets more right than many of the other feeble attempts. He adds his own flair, including the disembodied heads of Pierce Brosnan and Sarah Jessica Parker, but also respects the source. The alien ships are right out of Earth vs. The Flying Saucers, and the aliens themselves (and the entire movie actually) are based on a Topps trading card set from the era.

No other character better personifies the ’50s than General Decker (Rod Steiger) recklessly suggesting nuclear weapons be deployed the second the alien presence is known, denied that chance, yet ending up being correct. His frustrated reactions to repeated dismissals of his plans are priceless, right up there with the aliens actually using nuclear material like helium.

Call the visual effects aged if you will; you certainly wouldn’t be wrong. However, it’s added to the charm of the film over the years, the real crime being the budgetary constraints that prevented the use of stop motion that would have fit even better.

For a comedy, a lot blows up here, an assault on Las Vegas wonderfully over the top, including a full military strike and actual demolition standing in for destruction. At its peak, Mars Attacks carries a sense of chaos on par with some of the classics of this little sub-genre like Gremlins. The Martians are kooky enough to keep that comparison relevant, taking as much joy in wiping about the planet as the Gremlins did wiping out their small town turf. That fun translates to an audience, at least assuming you know the source material on some level. Ack ack! 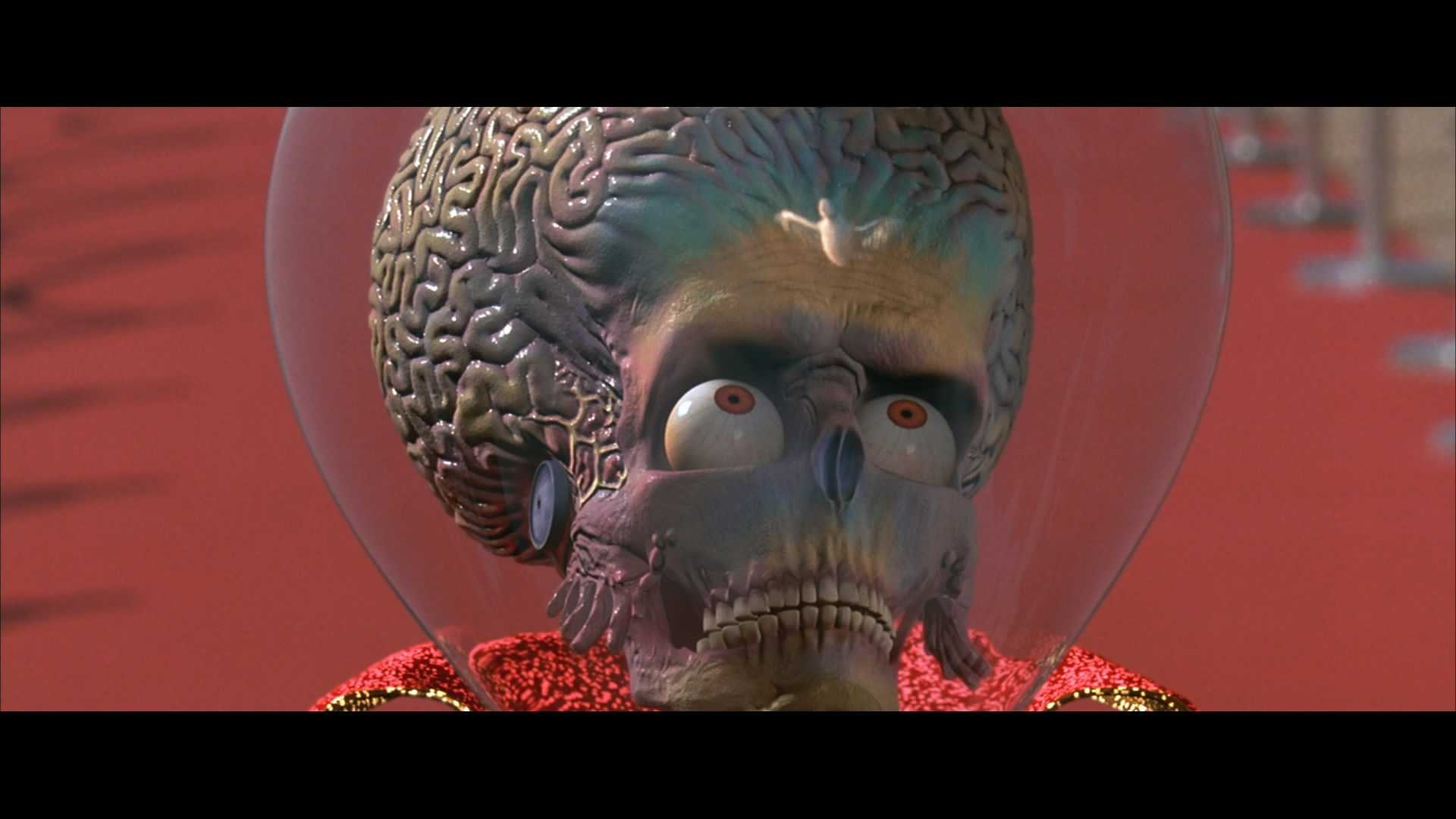 Warner issues the film on a stand-alone Blu-ray, unlike a series of their other catalog titles lately. Unfortunately, it doesn’t do much for the video, the VC-1 encode showing clear signs of filtering, slight DNR, and it probably stems from an outdated master (best guess). Whatever the case, this one is definitely not ready for prime time, performing inconsistently in-close, although it completely breaks down at a distance.

It’s not the mixture of CG effects playing any role. Most of the problematic shots don’t contain anything of the sort. Jack Nicholson appears waxy from his earliest appearance at 12:34, wiped clean of detail and barely qualifying for hi-def status. It doesn’t do much for the flesh tones, Burton going for a highly saturated palette as it is, the clothing worn by Sarah Jessica Parker early producing some hefty reds.

High contrast edges reveal some haloing, the opening shot of the film containing some obvious lines around the tree branches. Grain is noticeable; it’s not completely wiped from the frame. It’s definitely limited and controlled a bit more than it should be, leading to a likely accusation of DNR. The film doesn’t look terrible to be clear. It’s a disappointment to see some hefty digital shots like 1:00:30. There are some genuinely fine close-ups, Jim Brown at 29:46 being especially clean, refined, and free of imperfections.

Black levels are quite rich, stable, and generous. A bit of shadow detail is lost in spots, but is otherwise intact. The source is in fine shape. It is free of dirt and scratches, or at least anything severe, another positive. However, the whole release reeks of the “we have it so let’s release it” attitude, without actually considering what’s going to end up on the disc.

If the video was a disappointment, the audio is more so. There’s nothing technically wrong per se, the fidelity is fine, dialogue is clean, and explosions are beefy. There are two complications at work, and the first is an absolutely awful balance. Having the volume up at any normal level in the beginning is fine, at least until the attacks start. Sure, that bass is tight, clean, and natural, but it’s also completely overpowering. In fact, it’s insane how loud it gets if you’re not ready for it, a few of the explosions (doughnut shop) rocking the sub and rendering everything else meaningless… like your eardrums.

The second issue is one of surround use, or the lack of it. Despite all of the laser beams, panic, and hovering saucers, the rear speakers are not given much to do. Gunfire, which shines in terms of clarity, never finds a need to pop up behind the listener. The stereos work accurately to produce some directionality, helicopters and such tracking side to side, but that’s it. Not even Danny Elfman’s score squeaks into the surrounds like it should.

Not a single extra to be had, not even a trailer. That said, the only thing on the DVD were some production notes.