Maybe the source material for MacGruber was too far removed from people’s minds, or the SNL skits didn’t do enough to generate interest. It’s about the only logical reason why this ’80s parody flopped when it hit theaters.

It’s stunning how MacGruber gets everything right, from the one-liner puns, to the cheesy villain complete with ponytail. It’s dumb and over-the-top, the type of movie parody we used to get with such gems like Hot Shots Part Deux before being railroaded by garbage such as Epic Movie.

It’s possible that if you’re not familiar with MacGyver, movies like Commando or Cobra, you’ll be confused. MacGruber holds though, providing staggering levels of raunch and two hilariously overdone sex sequences, the first so perfectly done (minus the gags) you’d believe it was stock footage from the ’80s.

MacGruber never lets up, the jokes swirling through the script from the earliest frames, and they come from all angles. Visual gags, dialogue puns, character names, weapon flubs, and a personal vendetta so long-winded, you just have to appreciate someone’s ability to write something that stupid.

It’s all terribly trashy and tasteless, MacGruber (Will Forte) somehow making friends with Dixon Piper (Ryan Phillippe) simply by ripping enemies throat’s out. The film has no boundaries, taking its lenient R-rating to the limits of what it can withstand. The lead villain isn’t just killed, his body is desecrated, blown up and urinated on, and comedy or not, you can almost see the relief on MacGruber’s face. He finally has his revenge, or maybe it’s because he really had to go. Regardless, it’s hilarious, and maybe home video will give it a second chance. 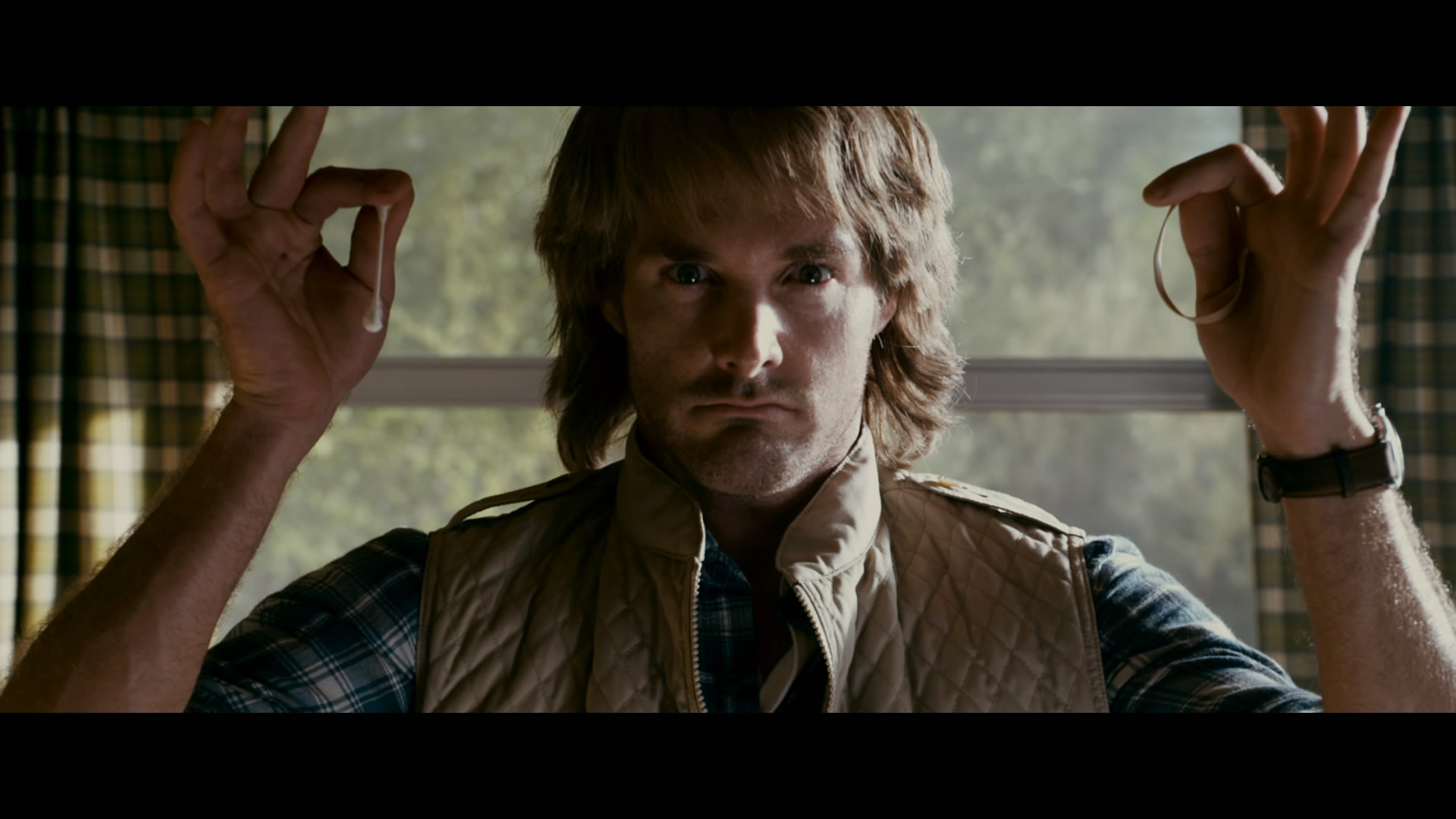 Universal’s VC-1 encode starts off pleasing, the close-ups of Will Forte and his WWE wrestler counterparts well resolved and rendered. The only thing inhibiting them is the intentional blooming light sources, intentionally there to give the visuals a haze and keep the parody alive.

There is some fine depth too, the image delivering in terms of depth with solid blacks and fine shadow detail. A hefty contrast does run hot, certainly by design, although rarely does it blot out anything of note. A slightly elevated level of color saturation is on display, giving flesh tones a warm tint outdoors, or colder blue when underground in various facilities.

Unfortunately, the digital nature shows through, MacGruber shot with the Red One and looking the part. The lack of film grain will enthuse some, but the lack of detail, waxy faces, and softness probably won’t. It’s staggering how wildly varied this presentation is, making Ryan Phillippe look wonderfully textured at 29:04, to literally unreal and seemingly Photoshopped into the frame at 40:19.

It’s a constant battle for high fidelity detail. While it may not struggle with any nagging technical problems (compression is fine, no ringing), the aberrant smoothness lies in direct contrast from the texture on display elsewhere. This is just not impressive at all.

Thankfully, this DTS-HD track is more on par with some of the expectations. It’s clean, rich, and aggressive, gunfire coming alive in any action scenario. As MacGruber’s hideout truck is being assaulted around 32:15, the surrounds kick in and come alive. Objects spin around the soundfield, bullets pierce the metal, debris is clearly identified, and a small low-end punch is evident too.

Dialogue is a concern, mixed surprisingly low and making a number of small, quick snippet lines almost unintelligible. It holds firm under heavy action situations, but those smaller moments where it actually matters are underwhelming.

There is a hint of ambiance around, strong at a party and inside a club. Regardless of how well they use the surrounds, it’s the heavy stuff that works, spraying gunfire around with reckless abandon, just like we want it. Bass isn’t quite as strong considering the size of the multiple explosions on display, lacking a tightness and full impact. It seems more effectively used on this track as an addition, aiding the punch of guns being shot off.

A commentary comes from director Jorma Taccone, Will Forte, and co-writer John Solomon. One single, solitary deleted scene might as well have been included in the unrated cut on this disc (it’s only :44), while a funny gag reel runs for eight minutes. BD-Live support is here too.