Emma Thompson is the show stealer here as the title character, even behind the layers of make-up. Nanny McPhee seems so structured and stiff, but she has her mannerisms. There is that little grunt when she sees something she doesn’t like that is fantastic, a perfect touch to show her reaction without resorting to any physical action.

She brings control to a movie without it, loaded with loud, obnoxious, messy kids, all wreaking havoc on a single father. Surely the child actors here had a blast filming this, making insanely large messes and getting to play with slingshots. Most adults would have enjoyed the opportunity too, whether or not they want to admit it.

That’s certainly an easy way to easy way to explain the ability to relate to the material for kids, McPhee setting them on the proper path when their hijinks go too far. Nanny McPhee does not just connect with the younger set on the base level, although that’s here too. Rules about listening and going to bed when you’re told are enforced wholeheartedly, but there is more.

McPhee’s goal is to instill five principles in these seven kids, all while helping them understand that their overburdened father Mr. Brown (Colin Firth) does love them and is doing all he can. It’s a fine message, important even, to help kids of single parents gain a perspective.

There is some adult material here to help the parents through this one, certainly not a difficult time at the movies. Some awkward gags about incest will go right over the kid’s heads, but at least there’s something tossed in for the older crowd. Nanny McPhee, despite its fairy tale setting, does tend to waver into embarrassing childish territory, the talking baby and smiling donkey unnecessary in the long run. There’s enough content and pacing to keep this lively though, at least to hook the kids and keep them occupied for a bit of fanciful fun. 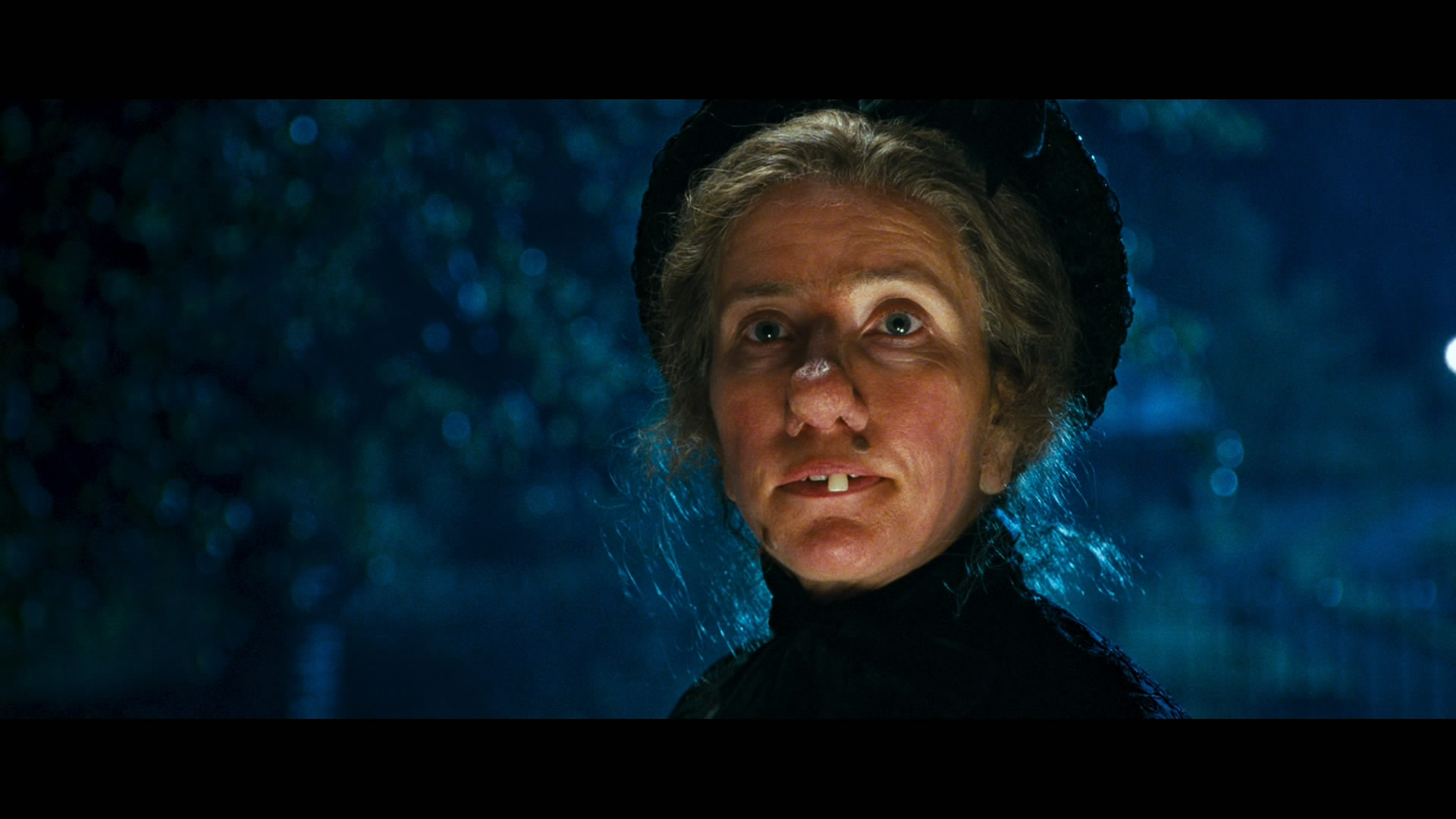 Universal delivers a VC-1 encode for this 2005 film, a fantastically colorful effort that never stops producing eye candy. The set design is such that bright greens, deep blues, saturated reds, and vibrant yellows are constantly dominating the screen. It’s perfect visual material for the target audience and hi-def enthusiasts. Never do the hues falter, consistently producing amazingly saturated shades of colors most people probably didn’t even know Blu-ray could produce. Through all of it, flesh tones remain accurate.

Contrast proves heavy, at times a bit overwhelming. It can wash out details when it runs hot, bleaching out parts of the screen, but it stays within the tone of the film and matches the deep blacks. Shadow detail is preserved as well, creating a deep, depth-filled image with only those slightly (and only occasionally) blown out whites.

The film grain is slightly bothersome, not well resolved by the encode and noisy. The opening 10-minutes or so are the worst, mid-range shots not fairing well. Long range views, from establishing looks of the house to any of the outdoor scenes, tend to offer limited delineation of complex environments. Trees and such collapse under the weight of compression. This all clears up by the ending, the wedding sequence wonderfully crisp and detailed. One grain spike at 37:27 is quick to pass.

As for close-ups, there are some incredible shots here, and the McPhee make-up maintains its integrity under the scrutiny. Shot of Colin Firth are immediately pleasing for their high fidelity detail at 3:04. Even the baby at 22:15 shows a bit of texture, although the slightly blotchy encode does mar that slightly. Some scenes at a beach 56:35 are exceptional, resolving every pebble on the ground without fault.

A DTS-HD mix is just as vibrant as the video, an engaging effort that rarely lets up. The sheer chaos of the opening scenes, with the kids going berserk around the house is spectacular. Young screams, clashing objects, and general noise are spread about the soundfield with effectiveness.

Surrounds are precise and specific, as are the stereo channels. An early scene has a toy mouse moving left to right, that tracking perfectly on cue and natural. Once the kids enter the kitchen, it’s madness, with utensils banging together, food being tossed about, and one kid spinning on a hanging rack. All of this enters the proper channel as need be, all with flawless fidelity.

There is a brief moment of dialogue that appears scratchy, soon after McPhee first arrives. Firth’s lines at 13:55 are notably lower quality than the rest, weirdly distorted considering everything else is so clean. It sticks out.

Everything else is superb, from the magical jingle when McPhee pounds her cane onto the ground to the effect of McPhee leaving/entering the rooms. Her final slam of her cane generates quite a jolt in the low-end as well, a beefy, loud, forceful thud. This is the only real bass work to speak of.

A commentary comes from director Kirk Jones and the children, although the lack of Emma Thompson is a disappointment. It was her idea to adapt a series of books in this manner. Casting the Children is a self-explanatory featurette, followed by a look at the sets called Village Life. A short piece on the make-up utilized leads into seven deleted scenes that include a funny alternate opening. A gag reel, a short piece on the stories that inspired the movie, and generic BD-Live support remain.