Bruce Campbell can take a beating. He’s tossed around the Tennessee-based cabin in the woods, slammed into shelving units, falls down the steps, is slammed to the ground, is named Ashley, and gets smacked with a fireplace poker. What a good sport.

It sort of works in a weird way to legitimize Campbell’s eventual frustration with the Evil Dead, the title creatures who used to be Ashley’s friends. They have been demonized (?) by an evil book, turning into disgusting heathens from who knows what circle of hell.

It’s never made clear what exactly transforms this group of friends from normal people into wickedly evil creatures. If it’s a mere assault or cut, then Ashley should become one as well. If anything, it’s a bit of a plot hole, but Evil Dead is that type of horror movie that closes those gaps by simply being itself.

The film is brutal, disgusting, and flat out reprehensible to this day, which is saying something when 3D horror gore is all the rage. The legend that has become the shooting of the film is staggering, from the cold temperatures to the total lack of funds. It’s amazing they had enough money for the fake blood, especially at this level. Evil Dead is a non-stop assault of human (and mostly inhuman) fluids seeping from wounds that occur all over the body. This is film insanity at its best.

The original seems a bit overshadowed by its successors, both of which tend to go for the gut with straightforward comedy. There are bits of humor in this 1981 effort, the finale continually exploding blood from the dying demons, all of it splashing into Ash’s face. Campbell also briefly dons the iconic chainsaw, although drops it in what now seems like the ultimate tease.

Evil Dead leaves an amazing impression on a first time viewer, stunned by what could be achieved with almost zero funds and one twisted imagination. Repeat viewings just give it more depth, the energy it possesses (no pun intended) undeniable, and the scares wonderfully prevalent. It has no boundaries either, which is why it remains an important piece to push an entire genre forward to what we have today. 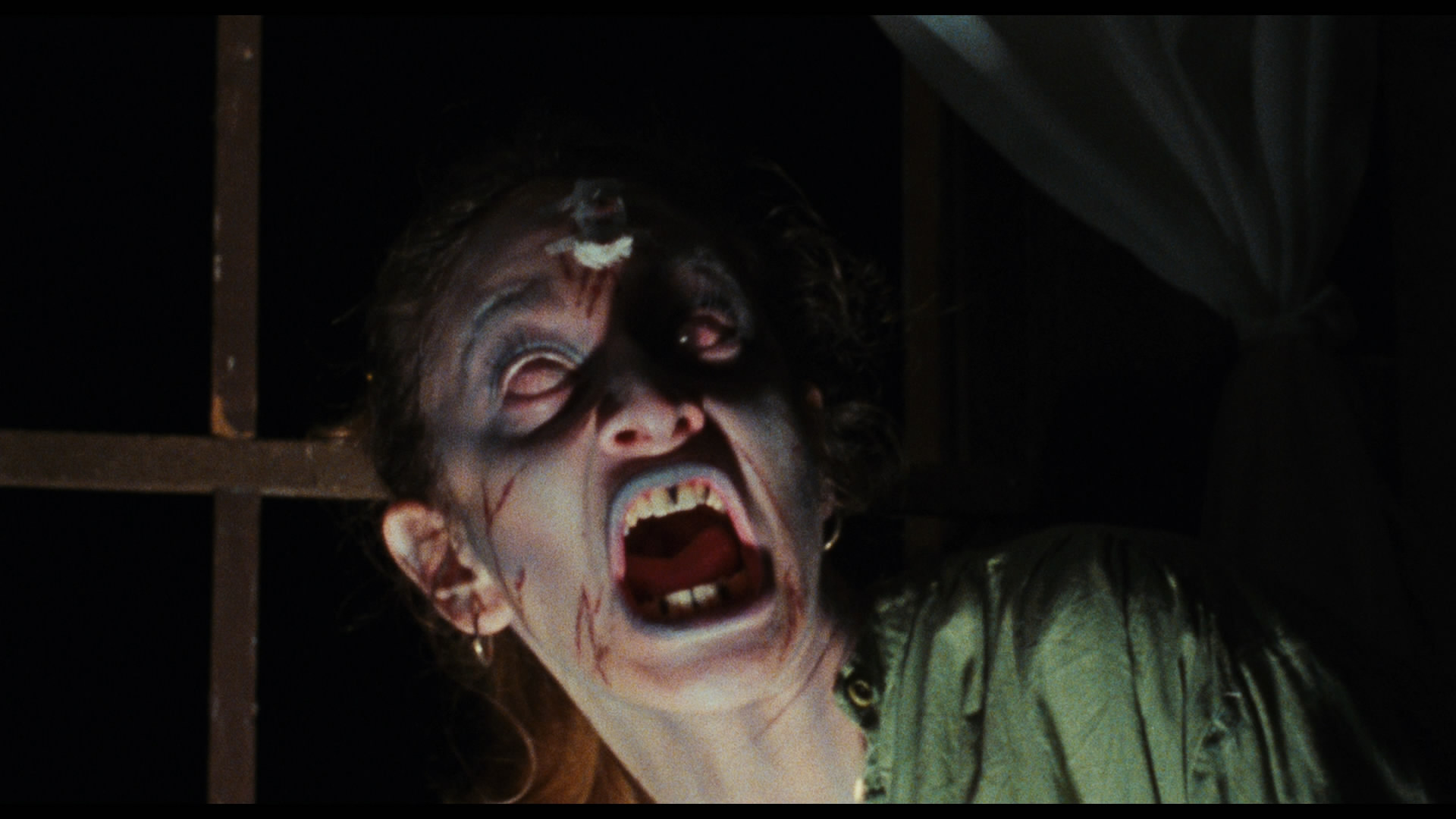 Evil Dead comes to Blu-ray with two different versions, a 1.85:1 framed transfer, and 1.33:1 ratio on the same disc. So there is no confusion, this review is referring directly to the 1.85:1 version, Raimi’s specified preference according to IMDB. The film was shot on 16 mm, and the result of that is instantly visible on this well handled AVC encode. Opening scenes are loaded with beautifully resolved grain, which for the most part remains heavy until the group enters into the cabin. There, it calms down a bit, with some random spikes that are in no way detrimental to the image.

Beyond the far better and cleaner grain structure, the color is a remarkable upgrade from the mountain of DVD editions. The Oldsmobile Delta carries a vibrant yellow hue, and lush greens of the forest during the drive up are gorgeous. Inside the cabin, the generally dimmer lighting diminishes the colorful impact, although the vivid blood and Campbell’s iconic blue shirt retain their brightness. The source here is free of any flaws, with no specks, scratches, or other anomalies to take note of. There is one moment of chromatic aberration at 18:58, a blue outline surrounding Scott’s face, the only real problem with the transfer itself.

Black levels carry a fine level of depth, giving the image that illusion of dimensionality. Black crush is a sporadic problem, mostly in situations where the lighting wouldn’t allow much else. Certain shots appear significantly softer, the first at 19:28 while Campbell and Betsy Baker sit on the couch. It looks pulled from a different film stock all together, one lacking in the definition available previously. A shot at 1:12:30 appears to have the same issue, although this time it’s devoid of any grain, just a weirdly smooth image that stands out.

Beyond the color saturation, the Blu-ray also resolves increasingly finer details. As Campbell continues his fights against the Deadites, he sweats profusely, those individual beads of perspiration becoming resolved and defined. It’s not just sweat either, nor is the high fidelity stuff limited to those close-ups on the eyes. Scotty has some visible pores at 15:35, and even in the lower light, Campbell’s close-up at 49:51 does much the same. It’s still limited to the source stock, but impressive nonetheless. The various make-up effects become quite apparent, as does the gore. The increased resolution makes that low budget show through. This is a great effort from Anchor Bay.

The first uncompressed home video mix for Evil Dead is a bit of a forced effort, trying to squeeze something out of the surrounds where it’s not really needed. This TrueHD mix is technically proficient. The meager recording methods will always leave the dialogue with a hollow empty quality. Shotgun blasts will forever be strained and distorted, along with glass breaking.

The score is clean, easily the highlight. What it lacks in flawless clarity in the high end it makes up for with some power. The mix ensures everything carries a fine balance, the score never booming too loudly to overwhelm the effects, but forceful enough that it remains important.

Where the surrounds become bothersome are the sound effects. The score bleeds a little into the rears, but hearing Shelly’s screech at 46-minutes across every channel sounds forced. There is no natural separation evident, just a clone of the stereo channels. It’s a shame too, because the fronts are utilized quite well even from the start. The porch swing that is slamming against the cabin at 4:40 is distinctly placed in the front right, where it should be. As the clock ticks side to side, the audio follows. The surrounds become more a distraction, and this 5.1 mix is the only English option on the disc.

The first disc contains only a commentary, but it’s a new one from Sam Raimi, Bruce Campbell, and producer Robert Tapert. If there’s anything else to be said for this film, it’s in there.

The second disc is a standard DVD, and it’s loaded. One by One We Will Take You is the key documentary, running nearly 54-minutes and it’s loaded with footage from the set. A staggering hours worth of deleted scenes are crammed into Treasure from the Cutting Room Floor, followed by a retrospective Discovering the Evil Dead.

Ladies of Evil Dead Meet Bruce Campbell is a sit down chat with Bruce and the female cast. Unconventional has the cast and crew discussing touring to various conventions, followed by two different panels hosted at two different showings of the film. A brief make-up test comes next, with the final piece being an extended version of Ash flipping through the Book of the Dead. Trailers and photo galleries remain.

Full disclosure: This Blu-ray was provided to us for review. This has not affected the editorial process. For more information on how we handle review material, please visit our about us page to learn more