Don Cheadle plays an undercover cop in Brooklyn’s Finest, but is seeking a way out. He is becoming one of the drug dealers, having thoughts of turning on his fellow officers, and is sick of not being able to have a family. Tango (Cheadle) meets with his superior in a restaurant, and director Antoine Fuqua sits on Tango’s face.

The camera doesn’t move as Tango tells his story about the thoughts running through his head as he considered shooting the cops who pulled him over for speeding. It is like he is not speaking, but thinking. Tango is monotone, serious, and in many ways terrifying, the grind of being undercover taking an immeasurable toll.

Brooklyn’s Finest focuses on three officers, Tango only the first with trouble. Sal (Ethan Hawke) needs to move, the growing mold problem in his home affecting his wife and two unborn twins. On his salary he can afford nothing better, so he willingly goes on drug raids no matter the risk and steals the money to make a down payment on a new place.

Eddie (Richard Gere) is the traditional burned out cop, now alone after his wife either passed away or left him (that remains unclear). He is oblivious to the world around him, uncaring about citizens, and teaching rookies the same characteristics.

Fuqua hardly paints the NYPD in a positive light. Everyone involved here seems corrupt or only caring for themselves. Tango, obviously a loose cannon, is consistently pushed back into the field despite his deteriorating mental status, all so his superiors can work towards a promotion. It is disheartening, creating immense drama, particularly as all three story arcs logically come together, each man on their own to deal with their own guilt or extract their own revenge.

The constant blare of sirens always indicates a police presence. Every scene seems to indicate some level of authority is near, whether in view or off screen. Given what the audience sees, the tragedy that must be occurring elsewhere is always noted. It is a film that takes it toll, both on the audience and the characters, creating an ending that leaves little hope. 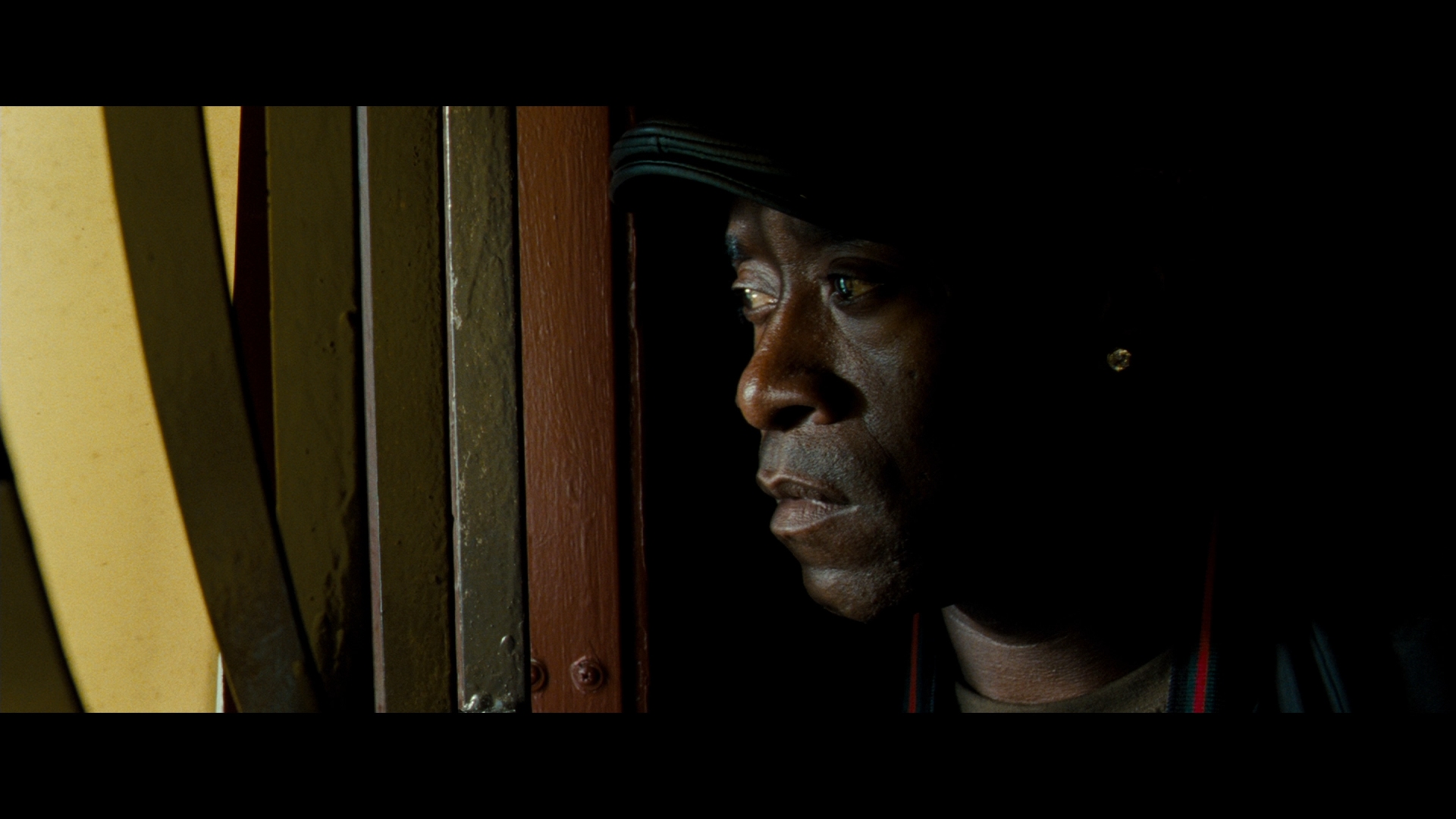 This is a simply outstanding effort from Anchor Bay, a resoundingly rich AVC effort. The film opens on a car sitting curbside at night, the deep, inky black levels a fantastic sight. Once inside the vehicle, about three-minutes, the detail on display is fantastic. Definition remains firm, moving into a jaw-droppingly refined shot from the air at 5:58, where trees and buildings all showcase texture.

Everything is rife with high fidelity detail, from the lockers at 12:46, to the cooler at 1:02:30, where all of the individual bottles are visible. Colors are highly saturated yet natural, bold flesh tones and clothing wonderfully bright.

Brooklyn’s Finest is just loaded with texture. The city’s brick structures are amazingly well-rendered, while the aerial photography and establishing shots just awesome. The Brooklyn Bridge provides outstanding eye candy at 1:14:51, the crisp waves of the water below razor sharp. It doesn’t matter what the lighting situation is. Inside the bar at 15:35, not only is facial detail near reference (and shadow detail exquisite), the wooden seats contain a fully resolved texture as well. It is stunning how well dimly lit scenes hold up against those in the day, all of those producing flawless images, Wesley Snipes and Cheadle on the roof at 31-minutes a highlight.

The video quality is just shy of absolute perfection. One of the aerial views of the city at 40-minutes is noticeably softer, with a vastly different grain structure and compression. Richard Gere and his companion at 1:32:56 appear soft, lacking that previously sharp look. These are two scenes that disappoint in a movie that runs over two hours, a real achievement with the thin veil of grain flawlessly resolved, and the intended look intact.

Brooklyn’s Finest is filled with chatter, and limited action. This PCM effort delivers minimal ambiance, mostly inside clubs such as the 1:20:00 mark. Street level produces some speaker-specific sirens and trains passing through the soundfield, along with general city noise. Surrounds are not aggressive, just complacent.

The highlight for audio buffs will be a raid at 41:55, a loud, heavy sequence loaded with gunfire. It carries a natural effect, low on the bass but heavy on the high-end and echo. There is a distinct pop when a bullet is fired, wonderfully rendered by this track. They are loud but not offensively so, balanced well with the dialogue, also handled well. The surrounds again sort of sit there with minimal work, this one front-loading the action appropriately.

This is a mix that makes its claim on clarity, not a resounding assertiveness.

Five featurettes, totaling 32-minutes, comprise the base of the extras. Most of these are disappointingly promotional and congratulatory. A series of deleted scenes, surprisingly in 5.1, run near 32-minutes as well total. Trailers remain.