It is a shame She’s Out of My League falls down the “romantic comedy script tree” and hits every branch. Yes, the guy and the girl break-up after sharing the montage of perfectly normal dates. Yes, the guy and girl suddenly realize they’re meant for each other after all. Yes, they need to make some absurdly ridiculous run, in this case across an airport, to find each other.

Why can’t modern romantic comedies, even the raunchy, pubic-hair shaving ones like this, break free of this formula? It is tiresome and predictable, hampering an otherwise enjoyable, charming, and legitimately funny piece. It’s like this genre is bound to these principles from which it cannot escape. Even worse, this script by Sex Drive writers John Morris and Sean Anders forces the break-up into the story under absurd circumstances.

Kirk (Jay Baruchel) is finally about to score with his perfect “10,” but finds out she has a defect, a webbed toe. This leads to an utterly ridiculous argument about being perfect and imperfect, one that comes from absolutely nowhere. It exists because the formula says it has to, setting up that last second airport romp.

Prior to this, it all works. Kirk and Molly (Alice Eve) are a great mismatched pair, meeting each others parents with hilariously awkward results. They work together, the trailers playing on Baruchel’s looks to make it seem like they are not a fit. For all of Kirk’s awkwardness, he is enjoyable to watch and as such it’s not hard to see while Molly falls for him. Generally playing the goofy friend or secondary character, Baruchel shows he can be a star, at least in comedies.

She’s Out of My League is loaded with secondary characters who may get a break eventually, mostly recognizable faces like T.J. Miller (Cloverfield) and Nate Torrence (Get Smart). Of course, Molly needs that quirky friend, in this case a hothead named Patty (Krysten Ritter), because the genre makes it so. Go figure. Just once can we avoid all of this nonsense? 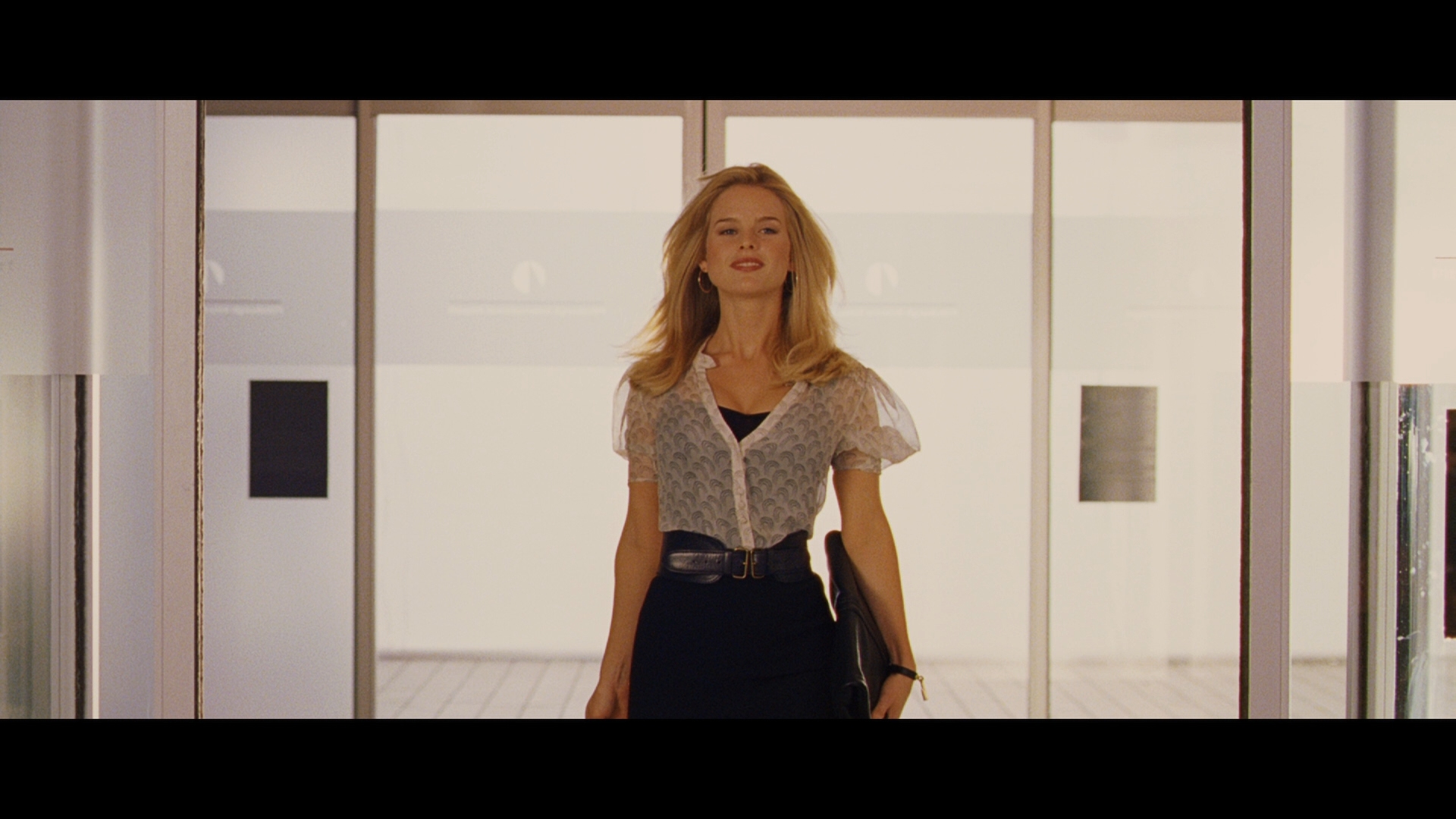 Paramount issues an AVC encode for League, one that is surprisingly awful in many aspects. The digital intermediate is quite damaging to the look, knocking flesh tones into orange hues (and making the skin look oddly translucent), blues and reds over saturated, while greens appear to be glowing.

The film opens on a close-up of Baruchel, and it is immediately apparent something is amiss. It doesn’t seem to be the encode, which maintains a high bitrate throughout. The pervasive softness is wholly unnatural for film, leading to suspicions of DNR. This readily becomes apparent during any shot from a distance, such as the restaurant at 28:53. Faces are barely recognizable, and the environment is devoid of definition. The same goes for a shot inside a hangar at 1:02:18, the two characters flat, soft, and unnatural.

The grain structure is hardly noticeable, and if it is, certainly digital in nature. Processing is evident consistently, the only scenes that seem saved are during the hockey game. On-ice action looks great, with a fine contrast and sharpness at work. There is a bit of ringing around the doorman at 34:38, the only time this became apparent.

All of this means lackluster detail throughout. Only extreme close-up (like those during the basement hockey shoot-out) perform, but at that range, it should even with tinkering. Facial detail simply does not exist elsewhere. Blooming light sources, like those at the restaurant, are obviously intentional. A bit of black crush is minimally invasive in a few scenes, leaving the black levels pleasing otherwise.

Before the plot even kicks off, a jet comes roaring over the heads of Baruchel and crew as they sit on a rooftop, delivering a loud, hefty jolt to the subwoofer and clean tracking across the soundfield. It is the highlight of this dialogue-driven DTS-HD mix, one with a bit of a volume balancing issue, the soundtrack significantly louder than the dialogue.

There is a smattering of impressive ambiance, including a party at 12:40, the music sitting in the background delivering a smooth low-end to the sequence. The hockey game also delivers screaming fans from all directions, and a concert around 1:10:30 is nicely handled. The music carries a proper echo, and excellent clarity.

A commentary from director Jim Field Smith is followed by a seven-minute in-character “dating show” hosted by Nate Torrence. Five deleted scenes include an optional commentary (also by Smith), followed by an enjoyable six-minute blooper reel.