It is not difficult to figure out Shutter Island. The twist ending is more of a completion of a puzzle. It is the pieces that get you there that are supposed to be interesting, and they generally are thanks to a fine, engaging performances from Leonardo DiCaprio.

We are introduced to Teddy Daniels (DiCaprio) vomiting on a boat. It is not exactly the most glorious intro the actor has ever experienced. He is a US Marshall investigating the disappearance of a woman from inside a mental facility, and that is the first clue to the nature of what is happening on Shutter Island. It seems like a small stretch that a mental hospital would need a US Marshall to investigate, no?

That’s one of many clues as you are led into Teddy’s past, in which he served in World War II, breaking up a Nazi death camp in graphic fashion. He is constantly flashing back in his mind, remembering events he has possibly experienced, but also hearing from his deceased wife who tragically died in a fire.

There is no question something is amiss on the island itself. Doctors are strangely unwilling to speak. Records are not allowed to be accessed, and an entire wing of the complex is off-limits. Everything unfolds as if there is some grand scale mystery afoot, when that is not the case. When the secrets are revealed, or you figure them out (likely), much of Shutter Island seems unnecessary in terms of the story. It feels more like this Martin Scorcese and this Laeta Kalogridis novel adaptation is toying with the audience, not providing anything of real value or merit.

That is frustrating in a number of ways, the two-hour plus running time seemingly stretched out when all is revealed, although everything does wind together nicely. Shutter Island does not leave holes, just a few questions that can be cleared up. It is intelligent, but not engaging, and in the end, frustrating.

Scorcese directs a number of creepy, eerie flashbacks, their visual impact a bit off-putting in a film that seems to be played on a normal level. Like everything else, it all comes together, but you are wondering how these scenes fit until the answers are given.

The emotion of the film is finally allowed to show through in the final flashbacks, a disturbingly realistic and terrifying piece of cinema that delivers a crushing blow to its audience. DiCaprio is mesmerizing here, displaying deep-rooted emotions in a variety of ways, building to a drastic, unforgettable conclusion that caps the film on a downer. It is getting there that can be a struggle. 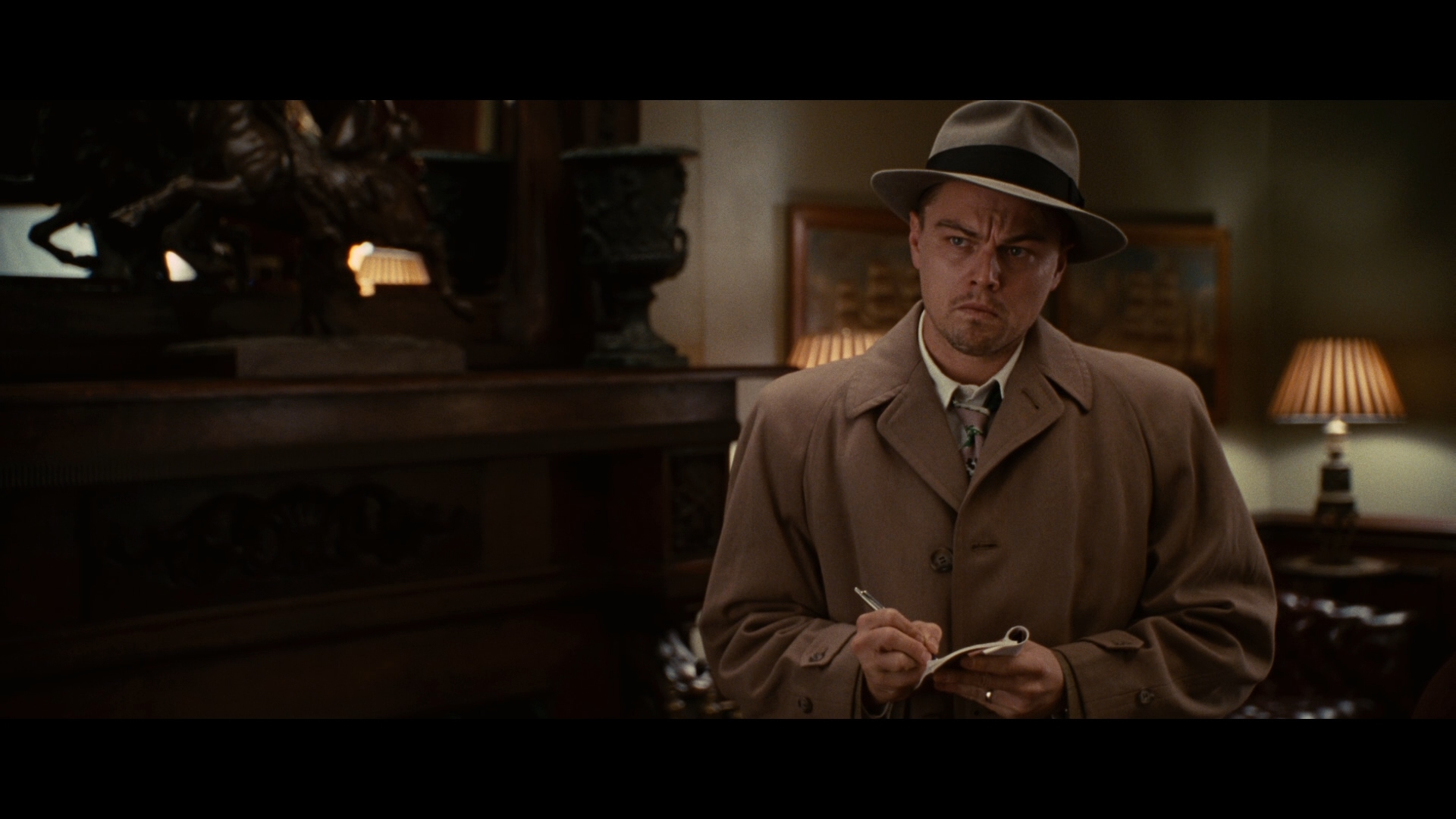 Paramount’s AVC encode for Shutter Island gets off to a rough start. The digital green screen effect wreaks havoc on the facial detail in those opening scenes, giving the characters a weird gloss to the their skin and pink flesh tones. The same thing happens later at 1:33:16, another green screen. Those are easy to dismiss as the result of the digital tinkering. Once onto the island and the security crews introduce themselves, facial detail is rendered beautifully. The key actors in the scene exhibit strongly defined features, rich black levels adding a layer of dimensionality. As the Marshalls are asked to remove their weapons, one of the security guards on the left of the frame (with the camera facing DiCaprio and Mark Ruffalo) looks unnaturally smooth. That is a problem that will resurface again, multiple times in fact.

Certain scenes, which are unspecified, were shot in 70MM. The best guess are some of the exteriors, which are rife with detail and texture. One of the final pans of the island exhibits tremendous texture on the ground, with fully resolved grass, trees, and other plant life. Swinging back to the early parts of the film, all of the introductory shots of the island are stunners, including 3:51 (rocks, trees, and more) and a tracking shot at 6:20 where the road is crisp and defined.

Once inside the buildings, things begin to slightly fall apart. Faces lose a bit of that definition. Textures are visible, although not with the same prominence. Certain shots are worse than others, Max von Sydow’s face at 1:38:35 being especially bothersome, but rarely are they that intolerable. Inconsistency just seems to be the nature of the source based on the different formats used. Tinkering in terms of the encode seem minor. The worst cases take place inside Rachel’s cell. Significant ringing around Ben Kingsley at 13:32 is evident, and upon the return to that same room, the ringing returns (51:29). In close-ups, mosquito noise is evident around DiCaprio (facial detail is also limited), along with a slightly heightened grain structure overall. DiCaprio’s jacket in the final moments exhibits some flickering.

Scorcese does a lot with color, including a garish yellow/green tinted flashback around 27:56. Others, such as a cold, blue WWII dream showcases an intense, deep red blood that contrasts the lighter shades elsewhere. The final flashback is heavily saturated (and highly detailed), with vivid greens and various shades of clothing. Nearly all of the establishing shots of the island environments are filled with extensive detail, beautifully so. They are the highlight, counteracting the inconsistency elsewhere.

Shutter Island is not an audio assault. It wasn’t meant to be, but more about atmosphere. The best moment of this DTS-HD mix is the introduction to the barren Ward C, where the empty halls allow for a fine, believable echo effect. Water drips into small puddles, and screams from prisoners are heard from all directions. It adds to the film, an additional horror element preserved here on this disc.

The movie certainly has moments, including a vicious storm sequence at 40:25, where creaking branches are aggressively placed in the surrounds. Whipping winds and heavy rains assault the viewer from all directions, immersive and loaded with superb clarity. The same goes for some shots on the rocky shore at 1:22:02, where massive waves hit the island with force. A World War II flashback at 44:08 contains loud, crisp gunfire, all of which hits the intended targets with a sickly sound.

Shutter Island contains a number of subtle musical numbers, including a few with brilliantly rendered piano notes. Their forcefulness and definition is immense, some of the standout moments of this mix.

Extras are brief, limited to two featurettes, totaling 37-minutes. These are well produced making-of efforts but limited, especially considering these are all that is offered.