Peter Jackson just could not help himself. Long into the battle of Helm’s Deep, the crescendo of Two Towers, Legolas (Orlando Bloom) sets a shield down on some steps, uses it as a skateboard, and rifles off arrows into the oncoming orc horde. Does Two Towers need something like this? Was the battle not ridiculously epic enough as it is without skateboarding elves?

Jackson properly restrains himself for much of the pre-battle. Gimli (John Rhys-Davies) is too short to see over the small castle wall. Cue a series of short jokes that do not dampen the mood, but create an added bond between the dwarf and Legolas. At least that banter served a purpose.

Considering Legolas’ non-epic slide is all of three seconds of a three-hour film, it is easy to let go. With basic character development out of the way, Two Towers is free to expand and build on the Rings universe. In this sequel, we are introduced to the Ents, living, talking trees who live by themselves. These lonely trees seem passive and docile, caring eyes and sagging branches bringing them to life instantaneously despite mixing poorly with the live action.

As a technical showcase, Gollum remains a startling achievement in visual effects. His digital performance, turning from greedy Gollum and frightened/paranoid Smeagol, is handled remarkably well. There is no fear that these shots will fail, giving the creature extensive screen time, in close-up no less, as his mind switches sides as to his allegiance.

Two Towers is allowed to astound audiences from the beginning, the fantastic brawl as Gandolf battles the flaming demon Balrog while falling down a pit a visual feast. The finale, lasting nearly the full final hour of the film, is nothing short of pure Hollywood spectacle.

Like its predecessor, these theatrical cuts suffer due to their length. At times, they feel overly extended, the constant need to sweep the camera across familiar landscapes doing little to emphasize scale once established. The other side brings with it underdeveloped characters such as Haldir (Craig Parker) who is just sort of… there. It is hard to fault anyone, with four screenwriters undoubtedly trying their best to squeeze these novels into small chunks the best they can while not confusing audiences with such a plethora of locations and characters.

Two Towers may be the most satisfying film of the trilogy, its scope extensive given the many locations and the battles. It serves as a set-up film, as it should, putting characters where they need to be prior to what is coming. The end is satisfactory, certainly far more so than Fellowship, and it builds enough character to let us know that elves can skate… ugh. 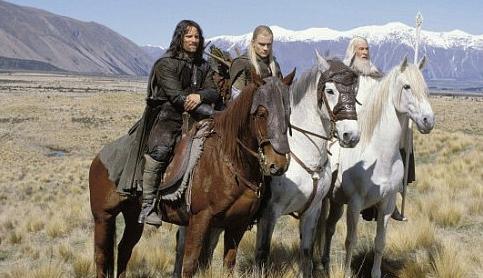 New Line’s transfer for Two Towers (a VC-1 encode) astounds from the opening moments. It begins on extended, sweeping pans of a mountain range, instantly better than anything on the Fellowship disc. The depth is remarkable, the contrast is bright, and detail is exquisite. Panning down onto Frodo, things are slightly noisy at the four-minute marker, but still rife with dimensionality and a natural film-like look. Cloth is enormously well refined in these early scenes, the Hobbit cloaks offering fantastic texture. The first shots of Gollum are likewise outstanding, revealing every line on his digital face…

… then things start to become worrisome. As Frodo and crew start walking through some foggy areas at 6:38, smearing becomes evident, along with artifacting. At 7:13, the old DNR’ed look that dominated Fellowship has suddenly returned, although hope is still alive. This could be the result of mixing the digital Gollum with the live action plate. Smearing continues to be a problem during long shots, especially as the camera pans out wide. Looking at the grass shows the image is significantly breaking up, undoubtedly due to digital tampering. At first, it seems to only affect shots from a distance, then things start taking a turn for the worse.

Gandalf, just like in Fellowship, is waxy beyond all recognition. Time stamps are many, including 43:47 and 45:12. Look at his face at 45:36, a deceptive shot since the side of his face seems detailed, yet his beard is nothing more than a clump of gray. There is no grain structure at work in the vast majority of shots. Nearly all of the scenes inside Theodon’s throne room are disasters, suffering from excessive processing, sharpening, and DNR. A shot at 58:21 suffers from extensive noise and white specks, a look that is removed by additional processing as the scene continues.

Scenes later barely fare any better. Pans of Helm’s Deep, including one at 1:59:54, are noticeably sharpened. Admittedly, this could be the result of the extensive effects work, although other scenes filled with CG sights seem fine. The attack by the Warg’s midway through looks fine, the fur on the creatures a standout.

Overall, much of Two Towers is an improvement even if it doesn’t sound like it. Layers of DNR seem sporadically applied, and generally not to the severity of Fellowship. Detail is pronounced, close-ups are typically satisfactory, and the finale at Helm’s Deep is at least consistent in terms of deep blacks and detail. The blue-tinted color palette is handled well, while the throes of angry orcs marching are discernable from quite a distance.

Thankfully, audio remains as aggressive and as full as possible. Another masterful DTS-HD 6.1 effort, the mix is allowed to showcase itself early. Gandalf continues his fight with the Balrog from the first film, bashing it against rock walls and slamming it with his staff. The accuracy of falling debris is fantastic, and the forcefulness of the bass is nothing short of awe-inspiring. This is a loud experience, the epicness of the Howard Shore score not lost on the sequence despite the intensity of the action.

Ambiance seems lessened in this sequel, quietly appreciated a little more with the sheer amount of action. There is minimal audio to the trek through the swamp, while Pippin and Merry’s trek through the forest offers limited sound to take in. There are moments, including the amazing power of a dragon’s wing flapping at 40:40 that break up the silence. Of course, the track comes alive when it needs to. Any battle scenes are reference, even the minor ones. The fight with the Warg’s is aggressive, action swirling around the viewer with incredible ferocity and clarity. Swords clanging carry fantastic fidelity.

Marching soldiers not only rock the low-end with their steps, but their armor clangs together as they walk, an effect brought to life by the added clarity (1:36:18 especially). Fans of subwoofer action will never be disappointed. The doors closing at 49:00 minutes in sends a remarkable jolt through the room, although the best this disc offers comes at 2:19:10 as the wall to the castle explodes. Giant blocks of debris thunder down the audience, and travel across the soundfield with remarkable positioning. Orcs hit the solidified doors with battering rams, adding to the assault on the LFE channel. The entire sequence is a winner, flawless in its balance and channel placement.

New Line/Warner has only included trailers for the films and video games on the disc, along with access to their typical BD-Live portal.