Ignore the books. Ignore the pop culture influences. Ignore the impact on the fantasy genre J.R.R. Tolkien’s Lord of the Rings had. Take a second (or three hours really) and focus on Fellowship of the Ring as a film. It is hard; most people immediately bring up discrepancies between Peter Jackson’s series and the books. As movies, as pure fantastical entertainment with no outside interferences… Fellowship fares well.

It has those Hollywood flourishes, no doubt. In a tense moment, inside Balin’s Tomb, clumsy Hobbit Pippin (Billy Boyd) accidentally knocks over a dead dwarf, armor and all, down a well. There is an air of humor over the moment, the otherwise pure silence broken by the falling corpse and awkward glances of the Fellowship themselves.

Its impact is much larger of course, altering a massive, hulking cave troll and countless orcs to the same location, but a moment that works better on film than it ever could in words. It needs those physical performances, that expensive audio mixing, and that sweeping camera movement.

There are of course other moments more revealing, maybe even falling into unintentional comedy such as Saruman (Christopher Lee) spinning Gandalf (Ian McKellen) on his head like a twisted wizard of the break dance during a fight sequence. These hurt Fellowship, taking away from the weirdly believable fantasy, and turning into something role players and Tolkien defenders struggle with.

Fellowship is a film that is both too long and too short. This theatrical cut slices character development down to its essentials, leaving Boromir (Sean Bean) as a character who simply appears to serve little purpose beyond repetitively expressing the Ring’s power. The film’s mixture of wizards, Hobbits, princesses, orcs, demons, elves, and dwarves is almost too much to bear. Phrases seem randomized without explanation, Gandalf preventing a huge fire demon from crossing a bridge stating the, “flames of Anor” protect him. As to what Anor is… that is up for debate since the movie never again mentions it. The scene as a whole feels unnecessary.

What all this character cramming does, aside from bloating the cast and budget, is create scale. Jackson’s reliance on sweeping camera pans of countryside mountains, overused in later sequels, here sets up establishing views of the scope. Middle Earth feels epic; these shots are necessary. Visual effects likewise do the same, flying in through the building of Isengard, setting the scale of the soon to be invading army. It is that now rare Hollywood film that deserves “epic” status, a film that would have been made during the heyday of these movies had the special effects prowess been available. Jackson brings that back effectively, convincingly, and excitingly for a mainstream audience. 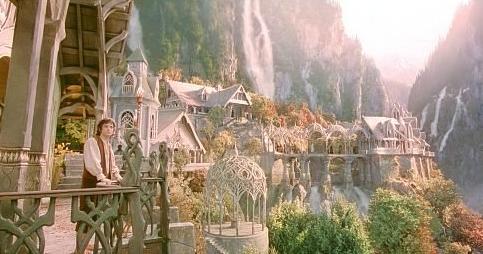 New Line debuts Lord of the Rings on Blu-ray in box set form, controversially in their Theatrical cuts only. The bigger fiasco is this transfer, particularly the first hour or so, which to put it lightly has been butchered. Early scenes in Bulbo Baggins’ home are quite simply some of the most horrendous yet on Blu-ray. Gandalf and Bilbo are blobs of wax, not actors or people. As Gandalf first steps through the door at 12:21, the mushy, undefined, and horribly DNR’ed appearance is nothing short of ridiculous. In close, facial detail is wiped clean, Gandalf’s beard lacking any real definition. Hair clumps together unnaturally.

Outdoors, the colorful homeland of Hobbits fares no better. Long shots of their village show no defined detail on plants or houses. Greens are overblown with an unnatural glowing quality. The first shot of Frodo lying by the tree at 7:25 is a perfect example of everything that’s wrong with this early part of the VC-1 encode, with a complete lack of texture on tree itself and the grass that fails to produce convincing definition. This look continues on, along with a variety of other problems. Banding is sporadic but still noted during the fireworks display a 15:46. The birthday party sequence as a whole disappoints, the processed look dominating amidst deep, satisfying blacks. Re-entering Bilbo’s home after he disappears carries the same results with poor Frodo, Sam, and Gandalf. Not a speck of grain remains.

Then, something happens to this transfer. It takes a while, but during the chase sequence as Liv Tyler takes an injured Frodo to her home, there is a close-up (a series of them actually) at 1:12:26. Here, not only is there detail, it appears natural and clean. The grain structure is notable, and the encode generally keeps up. These shots continue despite the intentional softness of the elf’s homeland of Rivendall. Behind the blooming contrast lies a pleasing, generally acceptable transfer of the source material.

It still remains far from perfect (which is what it should be). The grain structure seems to come and go. Even when it is noticeable, it looks processed, such as the sequence in Balin’s Tomb. This appears sharpened, heightening the grain structure and giving the picture a digital look. Long pans of Rivendall, such as one of the establishing shots at 1:16:23, are smoothed over to the point that the buildings are lost to artifacting and DNR. Sporadically, Fellowship comes into focus, especially in the closing moments. A close-up of Frodo at 2:12:10 is superb (depth, dimensionality, and detail all wonderful), and Saruman’s speech to an Orc at 2:23:45 (the same) are basically what this encode should have produced all along.

Fellowship is the lightest of the three films in terms of action, but certainly not lackluster in terms of audio. The vast majority of the movie impresses with immersive ambiance, from subtle flowing water, to birds chirping as Frodo walks around his home. Inside caves, a slight echo is evident. Visiting the Prancing Pony, customers clang glasses together and chat with each other in every channel.

The score benefits immensely from the upgrade to uncompressed audio. At 1:05:00 as the camera sweeps into the underground of Isengard, the full power of the trumpets is felt. Their clarity is immense, free of any distortion or digital tinkering. The camera movement itself produces a heavy low-end, and the metal workers slam their tools down with fantastic crispness.

This is a DTS-HD 6.1 effort, the extra rear channel coming into effect repeatedly. The Cave Troll battle utilizes it as the creature swings its chain through the air spectacularly, the added surround motion creating an additional level of immersion. The Ringwraiths, passing through the soundfield as they give chase to the Fellowship, are tracked beautifully. The spacious fronts are aided by a powerful low-end as their horses thunder by. Mount Doom’s small eruptions extend deep into the LFE channel, as do Frodo’s visions as he puts the ring on. Whipping winds and freakish voices complete the experience of the latter.

Large scale battle scenes, including the pre-title sequence, feature fantastically clean sword clashes, armies thundering across the battlefield, and precise directionality only the best discs can provide. The final battle, spread thin as it may be across the forest, is still aggressive in its surround work.

Extras on this disc include only trailers for the film, the trilogy, and video games based on the movies.