The effects of Alice in Wonderland are from perfect, and that actually works for the film, not against it. Green screen effects do not always match up to the live action, and they shouldn’t. This surrealist story does not need perfect lighting environments, accurate fur modeling, and flawless backdrops. Every little noticeable mismatch works in creating a dream world, where not everything should be rendered with precision, but with a slight softness and unreal quality.

It is these visual effects that steal the film, so much so that Alice (Mia Wasikowska) is boring by comparison. Her Alice is drab, flat, and uninteresting, overwhelmed by the quirkiness occurring around her. As she sits waiting for the White Queen (Anne Hathaway) to make a shrinking potion, the film seems to grind to a halt. Nothing interesting is happening, partially a scripting flaw, but Wasikowska is just so dreadfully boring at the same time.

The movie is stolen, entirely, by Helena Bonham Carter. Her Red Queen is insanely fun, with those perfect glances, arrogance, and giant head to sell her insanity. Nothing comes close to her ingenious performance, and every scene she is not a part of is dull.

There are others. Johnny Depp is the proper choice for the Mad Hatter, and Alan Rickman’s slow drawl as Blue Caterpillar is wholly entertaining. Aided by the visuals surrounding them, they come alive… at least when they’re not trying to show off technology.

Yes, Alice was intended for 3-D, and translated to the home environment, all of those “woah” moments are suddenly painful reminders of a gimmick that was never needed in the first place. Watching a red knight stab at the screen is entirely pointless, or maybe not as much as the extended tumble Alice takes into the hole in the first place. Even with the expectation of Burton’s wacky, oddball style, these still stick out as showy, pointless moments.

Alice may be sluggish, but it ends on a high note, back in the real world where she finally breaks free of her snooty, snobbish upbringing. It is the closest the character comes to any real traits, a desperately needed spark before those extended end credits roll. 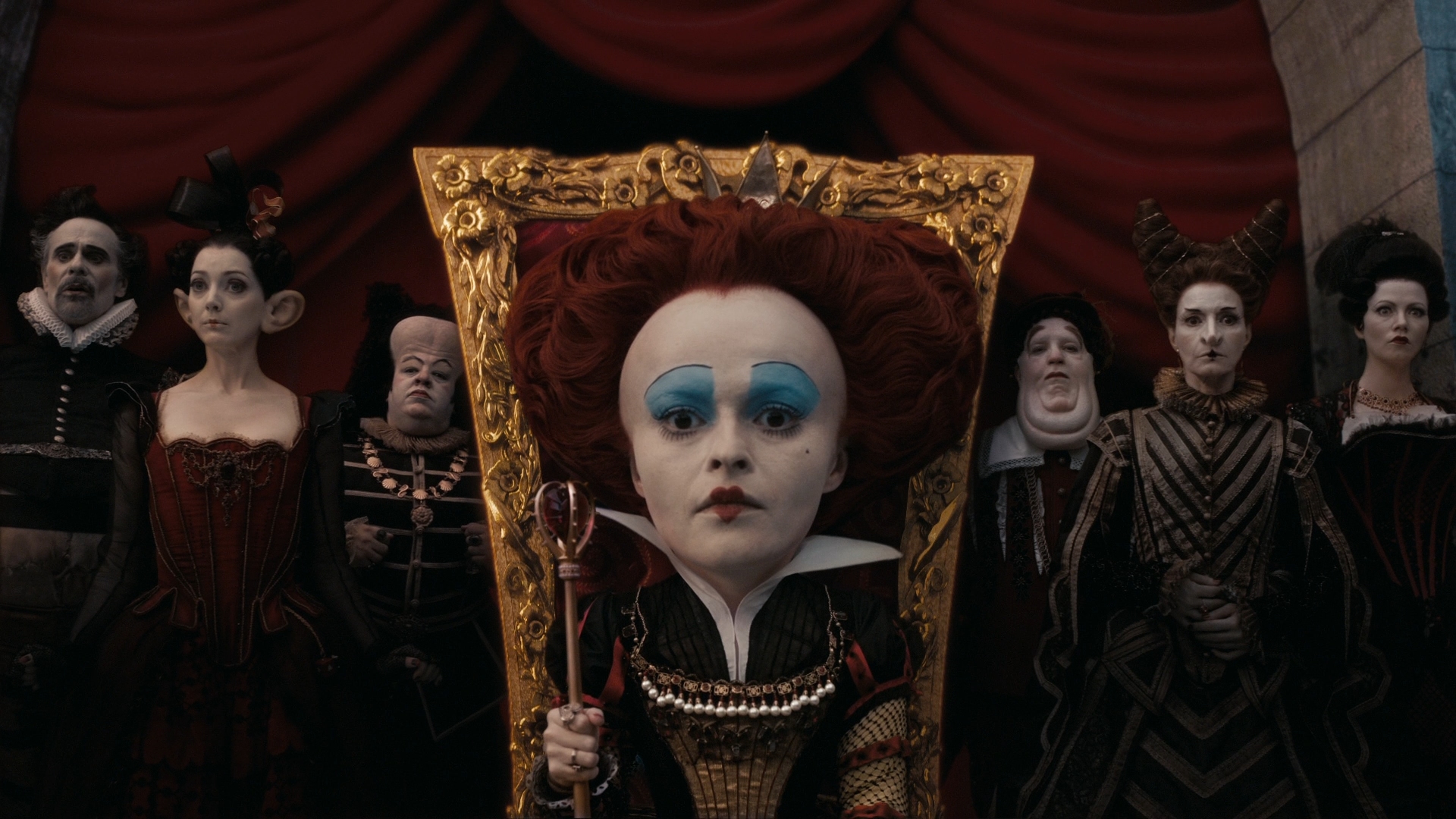 The book-end scenes of Alice in Wonderland were shot on film. There is a light, unobtrusive grain at work, perfectly resolved by the encode. As Alice is led around the party, she is taken past hedges and flowers, meticulously defined. These scenes suffer from a few minor issues; the opening shots in the home are a bit soft, and the green screen effect inside the carriage at 4:21 causes a noticeably noisy face on Alice. The subdued colors are not an issue, the bright contrast and rich blacks creating tremendous depth and dimensionality.

Inside Wonderland, things get off to a rough start. Two cameras were utilized for these scenes, although what was used where would be a mere guess. The Panavision Genesis and Panaflex were both utilized for the digital work, resulting in a general lack of crispness and some weak blacks. As Alice tries to get out of the hole (with the key and drink), black levels are subdued, and softness dominates. When she finally leaves through the door, it is a magnificent transition, the crystal clear digital effects taking over with intensely vibrant colors, and the image depth returns.

The special effects, or maybe this encode, are not perfect. Watch as the net captures the White Rabbit at 23:00. The net noticeably breaks up for a few frames, either a compression error or a means of creating motion blur. The same thing is noted when March Hare tosses a spoon and dances later at the table. These seem to be the only issues with Disney’s AVC effort in terms of the encode (possibly).

The remainder of the grievances are entirely with the level of detail. A 55:52, Alice’s face is unnaturally smooth and digital. Less than a minute later, it becomes reference as she wildly shakes Mad Hatter at 56:46. This type of inconsistency plagues the live action in Wonderland throughout. Scenes with the White Queen are soft by design, with a slight bloom. Creatures are always beautifully rendered, all of the fur perfectly defined and sharp every time. Generally though, environments are pristine and stunning, and even the costumes shine. The Mad Hatter’s hat is always brimming with detail, and the Red Queen’s cloak is flawless, with only a hint of shimmering at 50:00.

As Alice falls down the hole, you are given your first full taste of the audio bliss that is to follow. Objects ping off the sides, Alice bounces around, and the Danny Elfman score (who else?) is perfectly in balance with this extended action scene. Movement is precise and spot-on, exhibited even better as the Bandersnatch crashes through a wall to start a frantic chase.

Here, the creature’s steps generate a significant rumble, and he constantly runs over the camera delivering exceptional surround work. The track picks up on the little things as well. Listen as the Mad Hatter is first introduced and March Hare clangs everything together around 31:13. This is an immersive, effective moment, and the clarity of the DTS-HD 6.1. mix is stunning.

The final battle against the Jabberwocky is a spectacular audio moment, if a bit light on the bass. The creature swings his hands around, swatting at Alice, every swipe accurately captured in the sound field. The battle occurring behind the Alice/Jabberwocky brawl is equally impressive, the clanging of swords brilliantly clear.

Extras are split into two sections. The first is Characters, comprised of six sections and running 28-minutes. All major characters are accounted for in a variety of interviews and behind-the-scenes features. The second becomes a making-of-piece, again split into six sections and running 20-minutes. Music and visual effects get their due here. Trailers and BD-Live access remain.