You’re in trouble the moment the opening credits give you a headache. As The Stranger begins, we see Stone Cold Steve Austin (Grizzly Adams beard and all) running down the street from some of the worst SWAT team members ever. Grating music blares in the background, while the camera swings side to side blurring lights, objects, and people. The entire thing feels like an exercise in patience, one in which most people will fail… miserably.

Why was Steve Austin running from a SWAT team who literally cannot hit a guy five feet in front of them? The FBI is after him due to some shady shenanigans with a fellow agent which went horribly wrong, that’s why. Why do we care? We don’t really.

Stranger is dirt cheap, a sad excuse to put a former WWE star on the box art and lure in unsuspecting fans. Those poor, poor people have no idea what awaits them. Action scenes jump all over the place, rendering fight scenes unintelligible. Shoot outs are dull, boring, and it is unbelievable anyone involved in this mess was trained.

Stranger flashes back as Austin’s character Tom Thomachevsky (pronounced Tom Tom-a-chef-ski, meaning he is one step away from being a GPS) remembers his past life. He is on the run, but not sure why. By the time the movie is over, this repetitive, agonizing footage will seem utterly pointless. The audience figured it out a long time ago.

If this direct-to-video schlock has any bright spot it is child actor Dalila Bela who has a small role as a ship owners granddaughter. She is adorable, and smiles because she likely has no idea how terrible this movie is. Ahh, to be so naïve and innocent once again… 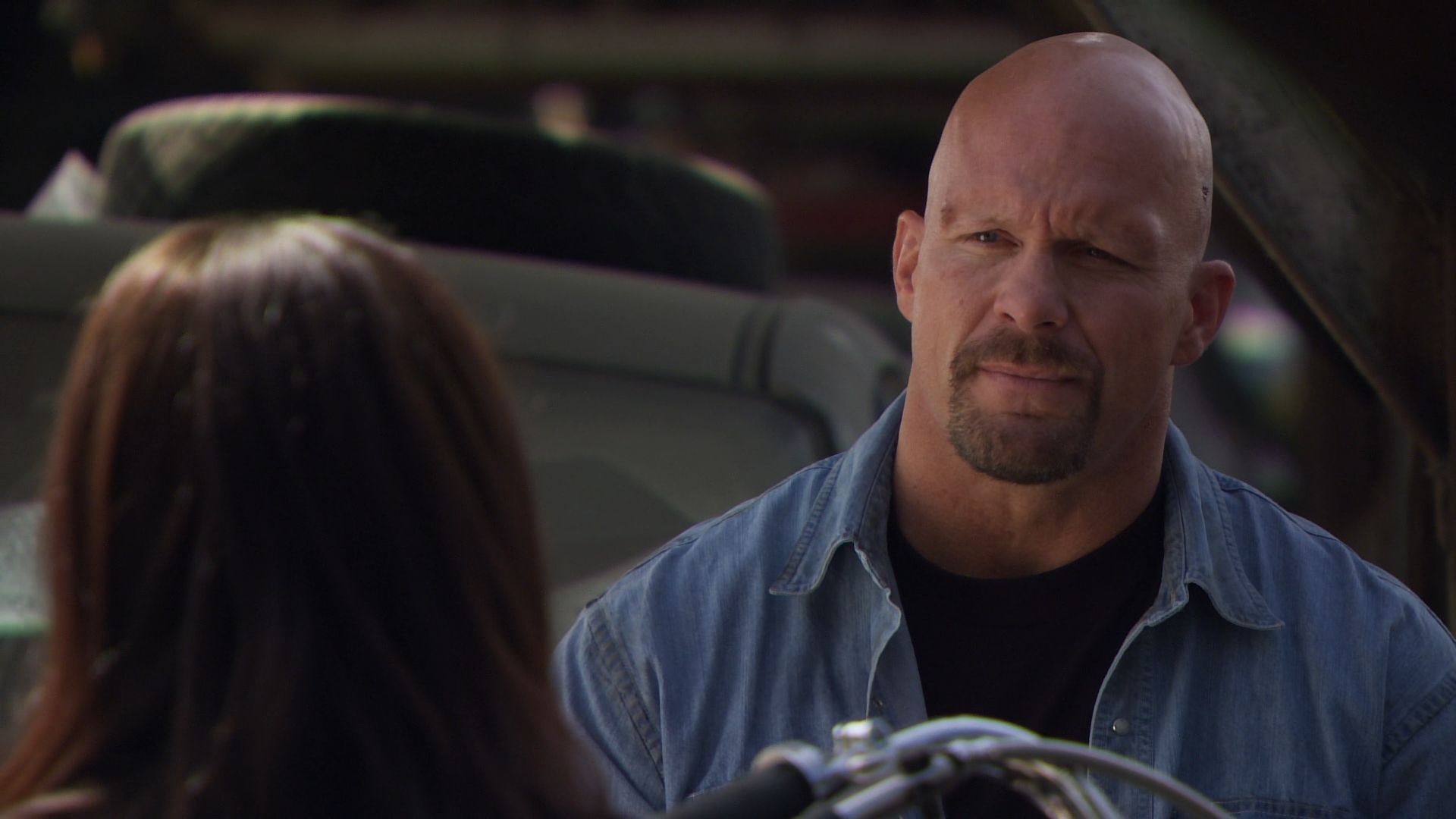 Shot digitally and cheaply, this one looks the part. Anchor Bay’s low bitrate VC-1 encode does no favors either. During a long shot of a post office hallway at 1:11:28, the bitrate drops to an embarrassing 810Kbps, worse than a YouTube video in many cases. A choppy, incomprehensible motorcycle chase at 53:30 looks like it was shot with a cell phone camera, and again, the compression is miserable. Seconds before, the interlacing is atrocious, and many of the edits during this scene carry the same problem. Even prior to the chase at 51:49, the trees in the background are a miserable collection of artifacts.

Massive blocks of compression join extensive video noise as one of the main issues, such as 17:22. Edge enhancement is sporadic, but certainly applied. The random guy who walks out of a door at 22:07 carries a halo, and Austin’s head does likewise later at 1:00:18. The entire movie carries a drab, flat look associated with meager black levels and digital video. There is no depth or pop to the image, and detail is lackluster.

There are a few bright spots. The intensity of the car lights at 42:52 brings out facial textures for the entirety of the sequence. Likewise, the finale during the interrogation (1:16:12) looks solid as well. Color finally seeps into the frame and some texture becomes dominate. Everything else disappoints, even the establishing shots, like the school at 5:04 which is a mushy mess.

An uncompressed PCM mix takes up more space than it is worth (Dolby Digital is an option as well), although it does add to the film slightly. A helicopter is clearly heard in the surrounds during a stand-off in a junkyard at 57:20, although you never actually see it. The shootout that follows offers decent directionality and aggressive surround use, if a bit overdone. Gunfire carries a general crispness, but the low budget sound effects offer little to impress a die-hard home theater owner.

Minimal low-end action is included, and the big moment (an explosion) is weak at best. There is little punch despite the opportunities. Engines are weak, gunfire flat, and punches sound like they barely connect. Dialogue is slightly hollow, although adequate to the movie’s needs, much like the rest of this track.

Extras include a trailer and making-of that runs for six minutes. The latter has some decent raw footage, and unintentionally hilarious praise for all involved.