Tell-Tale at least deserves credit for its wonderfully absurd premise. A modern re-imagining of Edgar Allen Poe’s famous poem, Dave Callaham takes the basic concept and runs with it. Instead of the famed beating heart sitting underneath a floorboard, it actually resides in the chest of Terry Bernard (Josh Lucas), a heart transplant recipient.

For whatever reason, his heart begins beating heavily around certain people… the same people who murdered Terry’s donor. Via a totally illogical explanation, something about stem cells and blood type switching, the murdered donor’s heart is picking out those responsible. Terry decides to act, and quite casually mind you.

Compared to Callaham’s previous work (Doom), Tell-Tale might as well be considered a masterpiece.

The premise here is a little too ridiculous, and could have better fit under a camp or parody scenario. Director Michael Cuesta plays it all straight, injecting a romance with Lana Headey, a sick child with a rare genetic condition, and a mysterious detective (Brian Cox) who has his own reasons for revenge. Tell-Tale plays out like a missed opportunity. Having someone go berserk because their implanted heart told them so? How can you miss that as having comedic value?

Tell-Tale has a few surprises, including a nifty twist ending that many will not see coming, assuming the sheer ridiculousness of the plot itself has not turned them off by that point. Some of the violence is gruesome, certainly selling the revenge angle, but the entire project never comes together as intended.

If the film has anything left by the end, it is the moral dilemma. Terry’s crimes are cruel in their nature, and mostly without base. Is he innocent or guilty? Sadly, the script never touches on either side of that debate, and additionally confusing, no one seems to care about the triple murder in his apartment either. How can you explain to officials that your heart told you to do it with a straight face? 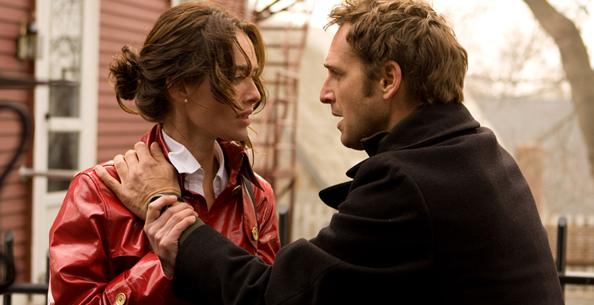 Tell-Tale comes to Blu-ray from Vivendi, a transfer that is routinely impressive on detail, and completely lackluster in terms of depth. There are no other adjectives needed when referring to the black levels. They are terrible. Scenes at night are murky, and at times can take on a digital appearance. Colors poorly separate, and at 50:09, Lana Headey’s face takes on a ghastly glow as if she was possessed.

It is odd then how much better some scenes look. Stunning levels of definition and detail are present in multiple sequences, such as a conversation between Lucas and Cox under a bridge at 1:07:00. The concrete surrounding them, when in focus, is fully resolved and defined. Their facial textures are outstanding, the cool color palette delivering a striking contrast, and the black levels are rich. A chat with Lucas’ doctor at 42:45 delivers the same level of definition and depth lacking from the majority of the film.

Certain flashbacks seem to have been done on 16MM due to the heightened grain structure, although the noise could have been digitally added as well. This is obviously intent regardless. The slightly darker horizontal banding however might not be. A mildly hot contrast, causing limited blooming to lights, is inoffensive.

There are sporadic instances where the grain structure spikes, and the encode does not keep up. You can see this on the red support beams at 27:16, as well as some banding in the steam off to the right as Lucas moves forward. Environmental definition, from bricks to other materials are generally superb. Flesh tones carry a pinkish hue, a result of the color timing. With any depth to the black levels on anything near a consistent basis, this could have been a fantastic effort.

A DTS-HD effort brings clarity and fullness to the film’s minimal score. Only a few major musical numbers are included, and these carry enough force and weight to satisfy. Ambiance is generally limited, as is any directionality. This track sits in the center for nearly the majority of the film.

The highlight is the beating heart. What starts as a minimal bump becomes increasingly aggressive as the film moves forward. Eventually, the thuds delivered by the pounding is aided by heavy LFE activity that extends deep into the low-end.

Brief spurts of other action are merely adequate. A car crash offers nothing in terms of low-end punch, although the crunching metal and shattering glass are certainly clear. Gunfire is merely adequate, and again, lacking that assistance from the LFE. Dialogue is generally well prioritized.

The disc has nothing for extras. In fact, it is so bare, there are no subtitles to speak of either.