It is 33-minutes into Valentine’s Day until all of the key characters have been introduced. Those introductions can be incredibly fleeting, such as Gary Cooper and Julia Roberts on a plane. The film cuts from one scene, shows these two actors being covered with a blanket by a stewardess, and onto the next sequence we go. That’s character development. We now know they sleep on planes.

Few probably care. Warner/New Line released Valentine’s Day theatrically on, well, duh, Valentine’s Day, where it served its purpose to draw couples into the theater. That’s fine. The shame of it all is that Garry Marshall directed this breezy comedy, meaning it could have been so much more, especially with an ensemble cast.

You can forgive it for being a remake/knock-off/rip-off of 2003’s Love Actually. Again, Valentine’s Day was created for a big theatrical run on a certain day. It ensures no one is left out, from pre-teen kids to older couples about to renew their vows. Celebrities from every angle have put in their bids for this one, and that just makes it a deeper disappointment.

Sure, it has laughs, but like the story itself, they never feel connected. Hearing Jessica Biel speak after inhaling helium is funny, but pointless. Seeing some of these individual romances break down can be enjoyable, especially Jennifer Garner’s revenge on Patrick Dempsey. The film has ideas, but jumbles them together, trying desperately to connect them. It may have one or two surprises, but it’s not enough.

Even with the barrage of Hollywood faces on display, the film still finds time for cameos, however pointless they may be. Why is Adam Sandler here? Did Garry Marshall himself need to appear on screen? This is a bloated film as it is, the two hour running time in place purely to ensure these actors have satisfied agents in regards to their screen time. Ashton Kutcher comes closest to holding this thing together at the center, providing a generally likeable performance, particularly his interactions with young Bryce Robinson.

Somewhere this concept has merit. Maybe with one or two less stars, particularly a totally pointless romance with Taylor Swift and Taylor Lautner, this would have avoided the rushed feeling. It could have been padded with actual development instead of two people sleeping on a plane, which is the closest this movie comes to being relaxed. 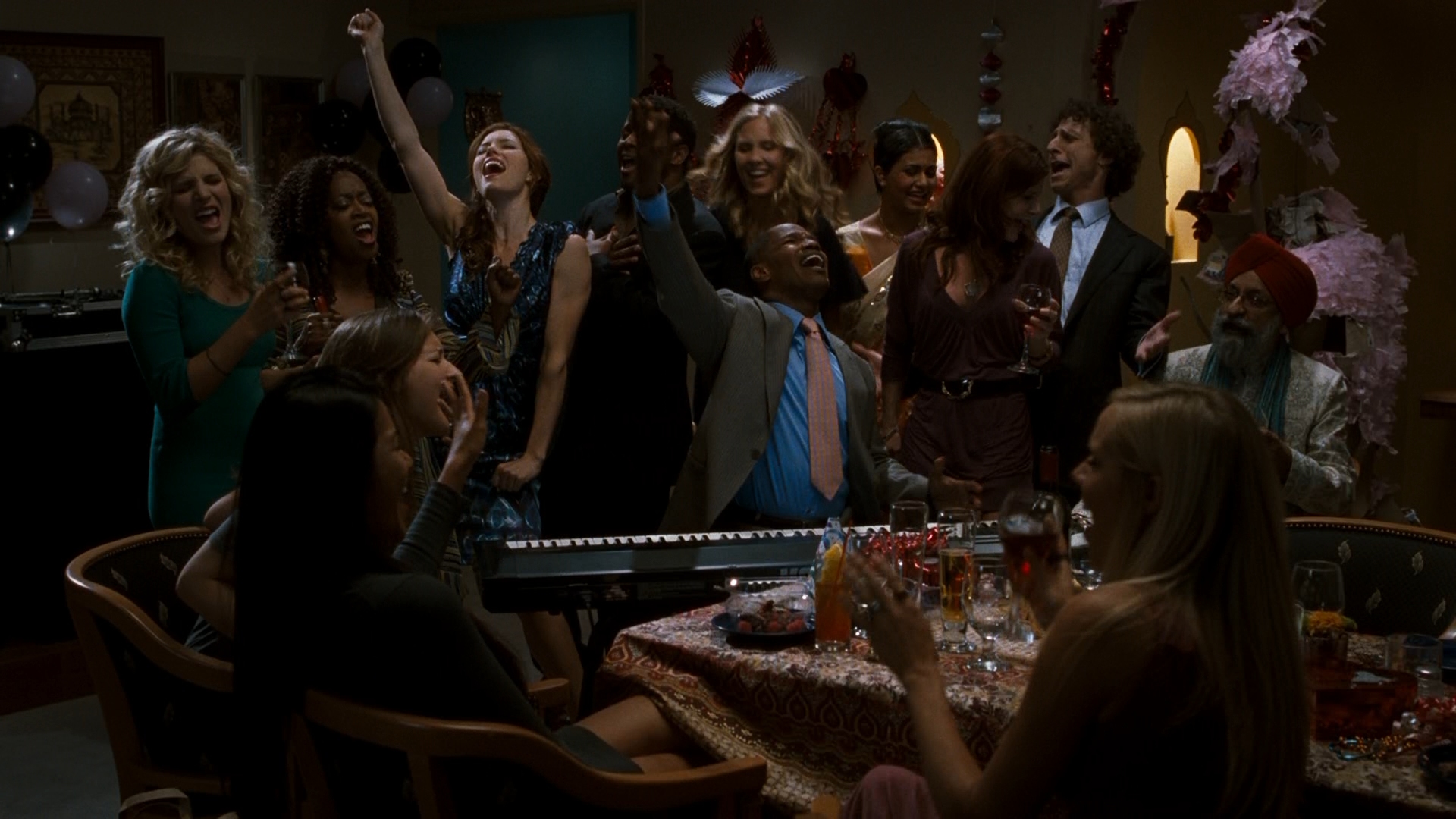 The encode for Valentine’s Day follows the usual Warner/New Line standard of a bitrate-starved VC-1 effort and the end result suffers for it. Opening credits showcase various California locations from the air, and despite a general softness, are well defined. A few minutes later, things go awry, a green screen in the background at 5:03 showing excessive noise.

Much of the film carries a rather dim, processed look. Sure, the colors are incredibly bright (reds to the point of bleeding) and warm, but the image lacks high fidelity detail of any kind. Faces are flat, at times lost behind a small haze of digital artifacting and compression. Distance shots tend to suffer the same. At 1:19:52, a pan shot of some docks breaks down, especially in the water. Ashton Kutcher’s pink shit is a disaster of compression in a few shots, at its worst at 54:53. The grain structure can occasionally break down, the encode losing the battle at 27:17 against some lockers.

Edge enhancement is sporadic, but noted. Some artificial sharpening may be at play. Eric Dane has a small halo around his inner arms/legs at 31:03. An airport security guard practically appears saintly at 1:03:17 considering the glow over her head, although this could be a poor green screen effect bleeding over.

The disc produces some strong black levels and decent shadow delineation. Black crush never seemed to be an issue. With the brightly done, warm colors, image depth is fine and delivers some adequate pop. Overall, the image is pleasing, but it is a shame the encode falters on multiple levels. This should be a lively, vibrant film, yet it never carries either of those qualities in regards to its transfer.

If you ever wanted to hear Taylor Swift in uncompressed DTS-HD glory, this is your film. Then again, if you’re reading a dissection of Blu-ray audio, you likely are not in that demographic. It does sound great in terms of fidelity though, and that has to count for something.

It’s not just Taylor Swift. All of the included music is full and rich, certainly the highlight of this talk-heavy comedy. It does get off to a rough start, the opening dialogue spoken by Kutcher oddly harsh-sounding. Thankfully, that is quickly cleared up, all words quickly ramping up to modern standards.

Surrounds and stereo channels generally remain quiet. Restaurants or other establishments provide a hint of ambiance, although nothing aggressive or notable. Even at street level, it can be hard to make out any surround work, leaving the dialogue prioritized without much competition.

Garry Marshall provides a solo commentary, a shame given the caliber of talent in the cast who should have been willing to lend a hand. Fourteen deleted scenes are included (14:22 total), along with introductions by Marshall himself. A six-minute section on bloopers turns into a Garry Marshall impression studio for a bit, and there is a separate featurette used to praise the director titled The Garry Factor. The Stars Confess lets the cast reminisce about Valentine’s Day the holiday, followed by a music video and Sex and City 2 preview.